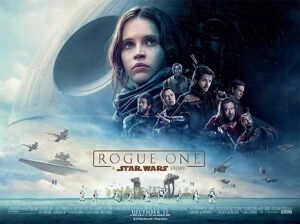 BASICALLY…: As the Death Star nears completion, a team of Rebel fighters are recruited for a dangerous mission to steal the plans that could lead to a major victory for the Alliance…

To properly talk about Rogue One: A Star Wars Story and what specifically makes it stand out, spoilers need to be talked about. However, since this has only literally just come out in cinemas and audiences everywhere are dying to see the first-ever standalone film in the franchise without having it all ruined for them, I have come to a compromise: there will be TWO reviews of Rogue One, one that will be completely devoid of spoilers (i.e. the one that you are reading right at this very moment), and one that will go into a lot more detail about certain aspects. However, don’t expect that one to be published until right after Christmas, to give all of you a chance to go out and see it for yourselves with as fresh eyes as possible.

So, this is going to be a completely spoiler-free (except for things revealed to us in the trailers, such as basic plot points, character names etc) reaction to Rogue One, which I have to say is both the grittiest and bleakest Star Wars film made as of yet – but is still tons of solid, mature entertainment, as you would expect from anything with the words Star Wars attached to it.

The story, as you may well know, takes place right before the events of A New Hope, aka the very original Star Wars. You know the drill: the Galactic Empire sucks, the Rebel Alliance is fighting back, and all confrontations lead to full-on war. However, this film puts its focus on Jyn Erso (Felicity Jones), a young woman who is roped into a Rebel operation when they receive a cryptic message from Jyn’s father, Galen (Mads Mikkelsen), who has been drafted to work for the Empire on a top-secret weapon that could give them the upper hand in this period of civil war. The weapon is none other than the Death Star, that giant space station that’s definitely not a moon which can destroy entire planets with incredible ease. Jyn is then recruited to be part of a team that is tasked to dive deeper into her father’s message, which leads to a major suicide mission to, what else, steal the plans from the Empire and hand them over to the Rebel Alliance.

To say any more about what happens, aside from how it ultimately ends because then the first movie wouldn’t exist, would perhaps ruin a bit of the magic for all of you (besides, that’s what the spoiler review is for). But know that Rogue One is clearly made by people who absolutely adore the original trilogy, specifically A New Hope, and have done their very best to replicate the grimy, 70s-esque space technology from that film, as well as a few camera shots and lines of dialogue that feel like genuine lost scenes instead of freshly-created ones. Gareth Edwards, director of Monsters and Godzilla, has essentially created a Star Wars fan film, but that is not meant to undermine its quality but to rather praise it, as you can tell that he adores the world of Star Wars so much that he dedicates himself to bringing back the same look and feel that first enchanted audiences almost forty years ago, from the smallest things in the background to the grimy sets where almost everything is dirt-ridden and used endlessly.

Throughout the film, Edwards pays loving homage to the film that started it all while also trying to make it work as its own story, especially since that’s what it was always meant to be, and while those callbacks are fine, even though they may come across as too much fan-service to some, it’s the newer stuff that ultimately hogs the spotlight, as it should. The main characters are simple, maybe not even fleshed out that much, but are still vaguely identifiable and likable enough to make you interested in where it’s going to go, the story isn’t too complicated to stop you from understanding what is going on, and the several scenes of action, humour, drama etc that are bathed in wonderful visual effects, both CGI and practical, work well to carry the film further forward. It goes without saying that this is by far the best Star Wars prequel, as it not only feels like a film that would definitely exist in the same universe as the original trilogy, but it works well enough as its own thing to make you want to re-watch without even seeing any of the other films in the series (though definitely do so anyway, as they’re all great forms of entertainment – yes, even The Phantom Menace).

If there were any gripes to be had against this film, and trust me when I say I am seriously plucking at straws for this one, I would say that it might not be as powerful an emotional experience as some of the other films, as although the characters in this film are fine they are nowhere near as instantly memorable as Luke, Leia, Han, Chewie, or even newer ones like Rey, Finn, Poe Dameron, Kylo Ren etc. That was probably the intention, especially since this is very much a standalone film, but that means you’re not quite as invested as you would be if the story featured any of those more well-known characters. Again, that’s nothing against the characters in this film, but don’t expect to be as invested as you would be watching any of the originals or even The Force Awakens.

There’s still a LOT to talk about when it comes to Rogue One, but all of that is being saved for the spoiler review. In the meantime, know that the film is a good piece of entertainment that earns its welcome within the much larger Star Wars universe.

Rogue One: A Star Wars Story is both a loving homage to the look and feel of the original trilogy, made with extra care by director Gareth Edwards, and also a strong enough standalone with great action, good characters, and a whole lot of fun.