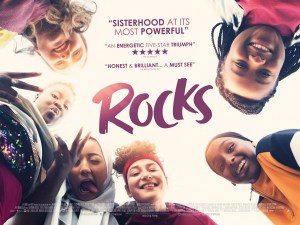 BASICALLY…: A young teenage girl (Bakray) finds herself and her younger brother alone when her mother suddenly disappears…

Among the first moments of Sarah Gavron’s Rocks, a beautiful testament of youth and easily one of the year’s strongest films, we see our lead character and her joyful collection of friends being general goofballs with each other, as young pals often tend to do. Whether they’re playing around with Snapchat filters or engaging in lengthy banter with each other face-to-face, it’s evident that this group is in perfect harmony with no judgement towards their race, religion, class etc, and during a period when such friendly gatherings of this magnitude are not only discouraged but made (temporarily) illegal, it’s utter bliss to simply watch friends be friends with zero boundaries in place.

The movie isn’t just a loving account of adolescent friendship, though; it’s also a thoughtful examination of young womanhood in general, and the choices which can ultimately make or break close relationships. It’s bold, distressing, and sometimes heart-wrenching; but not once does Rocks lose its ability to inspire joy in anyone who’s fortunate enough to see it.

Set in the suburbs of East London, our main character is British-Nigerian teenager Shola (Bukky Bakray), best known as “Rocks” to her closest associates, particularly her schoolmates which include her best buddy, Muslim teen Sumaya (Kosar Ali). Rocks lives on a council estate with her mother (Layo-Christina Akinlude) and her younger brother Emmanuel (D’angelou Osei Kissiedu), and at first things seem fine; however, once day after school, Rocks discovers that their sole guardian has disappeared – it’s implied that she once had, and most definitely still has, some sort of mental health issues – leaving Rocks to take full responsibility for her brother, even if it means avoiding social services which are slowly closing in on them. Her desperate situation soon starts to affect her academics and, most crucially, her multiple friendships, even as they try to help her get around an increasingly difficult set of circumstances.

Gavron apparently assembled her young cast – the majority of whom had never acted before – before the script was even written, and developed the story and characters with her ensemble so that everything, from their cheery banter to their complicated scenarios, felt as natural as it possibly could. The gamble pays off big time, for this is one of the more authentic British teen films in quite some time, to a point where it doesn’t even feel like you’re watching a drama half the time, but more so an insightful documentary that just happened to capture raw footage of these British youths going about their day as normal. The young cast is revolutionary, all sharing some genuine chemistry with each other and also delivering dramatic performances that give turns by more experienced actors this year a run for their money; some of the standouts, other than lead Bukky Bakray who delivers such an incredible turn it’s almost impossible to believe she’s one of the cast members who’s never performed before, include Kosar Ali who’s a charismatic presence and full of infectious fun and joy, and little D’angelou Osei Kissiedu who’s a proper scene-stealer with his wide-eyed cheek and amusing anecdotes which, mercifully, never cross the line into irritating TGIF sitcom kid territory.

They’re all working under the tutelage of a strong director, who between this and her previous film Suffragette seems to have really found her groove as a no-holes-barred filmmaker who doesn’t shy away from some serious female hardships, but ultimately finds inspiration in their ultimate connection with one another. Here, though, Gavron masterfully steers both her cast and her filmmaking partners, from cinematographer Hélène Louvart (who also lensed fellow 2020 standout Never Rarely Sometimes Always) to co-writers Theresa Ikoko and Claire Wilson, towards a final product that selflessly does not feel like it belongs to one person, but rather an entire collective made up of talented individuals who all wanted to tell a strong, meaningful story about the perks and pitfalls of growing up. Gavron is merely a source of guidance for her young actors, who all pitched in their own contributions that ultimately makes the film seem more authentic, and her crew who likewise had major parts to play in shaping the overall identity of this film from the creative stages onward, but the director herself deserves just as much credit for mining the most effortless performances out of an ensemble of newcomers, and keeping the tone light while also acknowledging the severe harshness of the story at its warm core.

It should come as no surprise to any of you reading this that I absolutely adored this film; it’s a truly wondrous piece of cinema, made by people with charm and talent to spare, but also enough fearlessness to dive into the gritty side of things without sacrificing any of its heart and soul. We could all go with a proper feel-good movie right about now, and Rocks, for all its heavy drama and realistic grit, ultimately leaves you feeling re-assured on life and its many advantages. After all, if a group of young friends from East London can find the joy in the littlest of things, then the rest of us can follow their example by holding our heads up high and facing the world with a cheeky grin and a profound faith in those around us.

Rocks is an outstanding collaborative effort from a group of talented creatives, from director Sarah Gavron all the way down to its revolutionary ensemble of mostly-unknown young actors, who all deliver a compelling and thoughtful account of adolescence and friendship, while also not shying away from the grit and harshness of certain situations. It’s a joyful, authentic and ultimately rewarding piece of cinema, and is easily one of 2020’s best films.

Want to decide what the movie’s like for yourself?
Check out Rocks showtimes in London
via