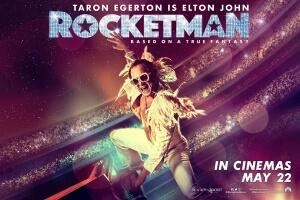 What can be said about Elton John that hasn’t been said already? He’s a musical prodigy, he’s a magnificent entertainer, he’s a glowing symbol of flamboyancy and more camp than an entire field of tents; whatever you may think of him, there’s no denying that he is a music icon for a multitude of very good reasons.

However, his long-awaited musical biopic comes at an awkward time, because it’s following in the footsteps of another recent, phenomenally successful, movie about a major musician which also happened to be (partially) directed by this movie’s filmmaker Dexter Fletcher. It’s nearly impossible to think about Rocketman without thinking about Bohemian Rhapsody, another biographical look at an extraordinarily talented gay musician diving headfirst into the wallowing pits of the industry, but while that film turned out to be a huge box office success and even won four Oscars for its efforts, it gained a heavy amount of criticism for its generic storytelling and unwillingness to take too many risks with the musical biopic formula. The backlash to its overly-safe portrayal of a less-than-ordinary music icon – of course, the serious allegations against its credited director Bryan Singer didn’t help either – was so strong that it caused some to fear that Rocketman, which debuted its first trailer roughly around when Bohemian Rhapsody debuted in cinemas, would meet a similar fate.

Gladly, that’s very much not the case; Rocketman is not only a far superior movie to Bohemian Rhapsody in regards to its storytelling, its emotional weight, the fact that it actually takes risks, and even parts of its filmmaking, but it also does what the other movie couldn’t and actually feel like a true representation of who its central figure is, with its heavily flamboyant personality and daring, even provocative, attitude. In other words, it’s the most perfect Elton John movie you could imagine.

Taron Egerton portrays the singer throughout the earlier stages of his career, from his emotionally-stunted childhood as Reginald Dwight – growing up under the compassionless and unsympathetic watch of his mother (Bryce Dallas Howard) and his increasingly distant father (Steven Mackintosh) – to his big break into the world of music as he teams up with lyricist Bernie Taupin (Jamie Bell) to create some of his most beloved tunes. It also covers his troubled relationship with manager John Reid (Richard Madden) as well as his growing reliance on sex, drugs and alcohol to numb the pain of his depression and short-tempered outbursts – and it’s all done in the style of a big show-stopping jukebox musical, with characters bursting into song and dance with some of the musician’s greatest hits being used throughout to help tell his story.

As a musical, it is many things: it’s wondrous, it’s exciting and it’s just a little bit crazy, but above all it’s extremely fun, with the tunes being used to enjoyable effect whether it’s with brief instrumentals or full-blown musical numbers, and a real driving passion behind it that makes all the difference in the world. Director Dexter Fletcher has been down the jukebox musical route previously with the similarly crowd-pleasing Sunshine On Leith which was based on the tunes of The Proclaimers, and was even brought on board to finish Bohemian Rhapsody after on-set problems with original director Bryan Singer (although Singer is the only credited director on that film due to industry rules), but whereas those movies were separately musical and biopic respectively, Fletcher blends the two together here to make an extravagant and lively experience that will have you feeling all sorts of emotions which not only feel earned but also genuine. It’s also a visually ambitious movie with its fantastical segments that give it a slight edge over many other standard music biopics; this is a film where Elton John is seen singing underwater with his younger self, floating in mid-air along with his audience at one of his first gigs, crowd-waving through what looks like an orgy scene by way of Gaspar Noé’s Climax, and all while dressed in some of the most sparkly and ludicrous costumes outside of your standard Comic Con.

It’s a lot of fun to watch and tap your feet along to, but thanks to Taron Egerton’s extraordinarily lively performance as the man himself it’s made even more rewarding. The actor is truly remarkable here, with free reign to show off the singer’s many talents – including a singing voice that’s close enough to the unmatchable vocals of the real Elton John – while also not being afraid to highlight some of his more questionable characteristics, including his fiery diva-like temper and tendency to push the people he loves most away. One of those people is Bernie Taupin, played with an overwhelming amount of heart by Jamie Bell and who, in his very first scene with Egerton’s Elton John, gives us far more of an understanding about the depth of their friendship than Bohemian Rhapsody did with Freddie Mercury and his fellow bandmates. Their chemistry is truly sweet and serves as the film’s beating heart, and you can see why their working relationship has lasted as long as it has, because you can see that despite all the tantrums and overreactions they are two people who still care for each other; not ten seconds after Elton explodes at Bernie, he stops himself and goes back to heartily apologise, when he could have so easily walked away in the heat of the moment. It’s a strong friendship on-screen, and it’s held together by a capable Bell and especially Egerton who is absolutely fantastic in the part.

It’s the best movie about Elton John that you could hope for, as it embodies everything that’s great and memorable about the singer, and throws it all into one giant mix of camp-tacular delight and pure entertainment. When you break down the plot, it’s about as generic as Bohemian Rhapsody was, but this movie just happens to be told in a much more daring and unique way that its formulaic nature tends to become an afterthought, as you’re having too much fun walking around in the shoes of a mad genius to really care about the mechanisms of it all. I truly hope this movie reaches the same heights, both in box-office and even awards recognition, as Bohemian Rhapsody, because it’s honestly more deserving of such success.

Rocketman is a delightfully entertaining musical biopic that encapsulates the flamboyant energy and larger-than-life personality of Elton John, brought to life by a towering performance by Taron Egerton, and turns it into a blissful, sometimes bonkers, movie musical that’s hard to resist.

Check out Rocketman showtimes in London
on Walloh.