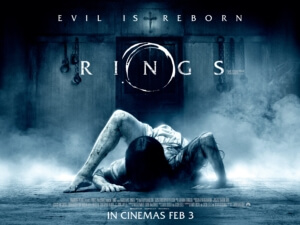 BASICALLY…: A young woman comes across a fabled video that is said to kill anyone who watches it after seven days, and seeks to learn more about it before it can kill her…

There was never a chance that Rings would be good, not a single one. First of all, it’s an all-too-late attempt to revitalise a horror franchise which hasn’t been active since 2005, after the poorly-received sequel to the decent American remake of the classic Japanese original horror film, so it’s less than likely anyone would even care about it by this point. Secondly, its release date got bumped not once, not twice, but FOUR times in its life span, with it originally scheduled to come out back in November 2015, then it got moved to April 2016, then to a more appropriate Halloween release date (trailers were even released to promote its debut for that very date), and finally to just after the January horror movie dumping ground of 2017 – if that’s not the sign of a total stinker, then I don’t know what is. Finally, and most importantly, one of its biggest name actors on the cast list, aside from Vincent D’Onofrio, is one of the guys from The Big Bang Theory. Now, I may not be the biggest fan of that show, but even I know that when one of the actors from it is one of the biggest names you can get for your film, then I’m sorry but your film sucks.

So, from all these conclusions, how on earth do you THINK Rings was?

Of course it’s terrible, and not just by horror movie standards; it’s a poorly made, poorly acted, poorly written excuse for a movie of any given genre, the kind that if I were a filmmaker even I would be embarrassed to have made this and somehow gotten this into as many cinemas as possible.

If you’re not familiar with the basic concept of The Ring, there’s a videotape which, when watched, you are cursed to die seven days after viewing it, unless by some happenstance you can solve the mystery of the creepy girl crawling out of the well before then. The only difference is that in this one, there’s apparently two stories going on at the same time; one involves a pair of good-looking but oh-so-bland college students (Matilda Lutz and Alex Roe) discovering the tape and solving said mystery, and the other contains a much more interesting angle where a college professor (The Big Bang Theory’s Johnny Galecki) is heading a secret cult of students who are investigating the tape while passing it on to other people so that they can have more time (because it’s apparently one of the ways to prolong your actual death, which raises the question of why doesn’t EVERYBODY just watch the video every week at a set time to ensure they live long and healthy lives?).

With a much better script, the film could have actually just been about this, and for a while at the beginning, it actually looks like Galecki’s professor is actually going to be the main character (this is also after a pointless cold open set on a plane that sets it up more like a Final Destination reboot than one for The Ring). But then, it cuts to these two bland-as-hell teen characters who we are then told to follow because they are the protagonists, but they are so uninteresting and with no personality to share between them that we do not care in the slightest about them for the entire film. Not to mention the fact that, honestly, they’re both pretty terrible actors. Roe is just a bland stock boyfriend type, but Lutz is so wooden in this, with one monotone expression throughout the whole film, even when she’s supposed to be scared or angry it’s always that Hayden Christensen level of not trying, and she comes across as Lizzy Caplan’s less-talented sister. Again, it really says all you need to know when the guy from The Big Bang Theory is one of the better actors in your movie.

I hesitate to call director F. Javier Gutiérrez’s filmmaking amateurish, but the kind of horror movie direction he gives in this movie is so dull and flat, the movie more often than not bores you rather than scares you. Nothing really happens in this movie that’s worthy of mention, and when it does it’s usually lifted from a much better horror film (the Final Destination riffs for one, and without spoilers – just in case you’re still interested in seeing it – the entire third act of this movie is a crappier version of Don’t Breathe) or just so nonsensical it leaves you confused more than actually terrified. It’s an ugly film to look at as well, with grey and green colours illuminating hallways and entire seminar rooms, and a lot of scenes shot in unpleasant darkness that are either impossible to make out, or just so unappealing it’s not even funny. Gutiérrez also really likes to show he has no respect for the audience by making the scenes shot during obvious reshoots overwhelmingly obvious, such as a scene immediately following Galecki’s stubble-bearded professor explaining stuff to a scene with that same character completely shaven, and then back to a scene where the stubble has miraculously returned. That’s not just a dumb oversight, that’s just straight incompetence in the continuity department.

None of it makes any sense, the acting is terrible, the direction is beyond lazy, but most of all it is not scary in the slightest. If you want to watch a horror movie that’s out right now and is actually good, just watch Split – or even go back and watch the original Ring, either the American or Japanese version. At least you won’t die from boredom after watching this film.

Rings fails to be a competent successor to the American version of The Ring, but also fails spectacularly as a film of any given genre, from its nonsensical plot to the terrible acting to dull direction, all adding up to a film that offers no scares or any reason to watch it even on an ironic level. This is one film where you’ll actually want to die seven days after watching it…