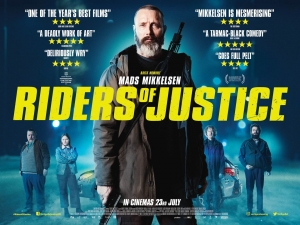 BASICALLY…: After his wife tragically dies in a train accident, a soldier (Mikkelsen) discovers that it might not have been an accident at all…

We’ve got ourselves a double-helping of Mads Mikkelsen in his original Denmark habitat this month, with the release of both the Oscar-winning Another Round and now Riders of Justice. Funnily enough, both movies not only star Mikkelsen in the lead role, but both of them, in their own individual ways, may inspire you to drink heavily afterwards.

Allow me to clarify: Riders of Justice, the latest collaboration between Mikkelsen and frequent director Anders Thomas Jensen, is in no way a bad film. In fact, it’s a very good film. However, it’s one that is enriched with themes and tones that only get darker and darker the further it goes along, to a point where you’re left feeling as though you’ve gone through a rough psychological experience just by watching it. As long as you can stomach its rough edges, though, you’ll be thoroughly surprised by the weight and depth its displays.

In the film, Mikkelsen plays Markus, a soldier who’s serving overseas but is called back home to Denmark after his wife (Anne Birgitte Lind) is killed in a seemingly accidental train crash. His teenage daughter Mathilde (Andrea Heick Gadeberg), who was also on the train, begs her father to seek counselling for the both of them, but he refuses, intending to deal with his grief on his own terms. However, he is soon approached by disabled mathematics whizz Otto (Nikolaj Lie Kaas), another occupant of the ill-fated train, and his unfiltered colleagues Lennart (Lars Brygmann) and Emmenthaler (Nicolas Bro), who present Markus with numerical evidence that the crash was not an accident, but an organised hit to take out an important witness for an upcoming trial, intended to convict the leader of a criminal biker gang known as the Riders of Justice. Markus, driven by his anger and a desire for vengeance, leads the team on a deadly mission to hunt down the Riders of Justice, but in doing so not only ignites a full-out war with the gang, but both he and his daughter also manage to find a way to psychologically deal with their issues in some very unexpected ways.

The film is a very darkly comic thriller, one that sprinkles its odd moments of humour throughout some rather brutal and cold instances of violence. The humour never sullies the overall tone, though, for it somehow manages to fit neatly in between the uncomfortable violence, disturbing character revelations, and many scenes of Mikkelsen putting on a stony face as he takes down an entire squadron of goons without batting an eyelid. Moments that conceptually feel like they belong in a sitcom – at one point, one of Markus’ new allies pretends to be his daughter’s new grief therapist, since he himself has 40 years’ worth of psychiatric experience having seen 25 psychiatrists in that time – are given very grim and rather tragic connotations that not only provide light-ish relief amidst all the carnage, but also let the characters’ guards down and allow the viewer to understand a bit more about their own messed-up pasts without it feeling too much like exposition. There are plenty of other moments that do get legitimate laughs, largely stemming from the team’s individual eccentricities and their overall dysfunctional dynamic with each other, which proves to be extra humorous as they continue to find themselves in increasingly dangerous situations that they largely have no idea how to get out of.

It is a very nuanced script by director Anders Thomas Jensen, for it handles both the humour and neo-thriller vibes with equal love and care, but crucially it also contains a surprising amount of wisdom and heart amidst all of its darkness. One of the main recurring themes is the notion of probability, with the main plot of the film largely driven by all the minor events that at first seem like coincidences – a character’s bike is stolen, a car won’t start, someone giving up a seat on a train, and so on – but put together they seem to form this warped chain reaction that becomes more and more violent as it goes along, which might all just be part of the overall plan for life. Jensen really dives deep into this concept and explores as many avenues as it can, either with strongly-worded humour or raw dramatic scenes of a character destroying entire rooms, amounting to a much more psychological approach that produces some very fascinating results with this extending plot and its characters.

Speaking of whom, Jensen’s script also gives his players plenty of material to work with as people who are in their own unique ways extraordinarily damaged but also rather sympathetic. The always-great Mikkelsen, virtually unrecognisable here with his buzzcut and scraggly beard, gives a stern and focused performance as a man struggling to find an outlet for his unhealthy mixture of grief and anger, and who if written poorly and with less humanity could have just been the latest in a long line of moody action heroes played by the likes of Liam Neeson or Bruce Willis. Meanwhile, you have someone like Nikolaj Lie Kaas’s Otto, who is arguably the moral epicentre of the main quartet – the other two, Lars Brygmann’s Lennart and Nicolas Bro’s Emmenthaler, display some clear behavioural issues that mask their insecurities and past traumas – but comes with his own brand of self-inflicted tragedy that he is always trying to atone for, and it is in both Kaas’s standout performance and the likeable way in which this character is written that you’re fully able to buy why someone like this would want to hang with much more unhinged people like Markus and the others for this mission.

A smart, sophisticated, and darkly funny alternative to the throwaway action-thriller, Riders of Justice is also a surprisingly deep and wise film about the random order of life and how certain people react harshly to it. How general audiences will react to it will be an area of interest, because while Another Round shows Mads Mikkelsen at perhaps his most jovial, this one dials it way back down to the ground with dark and disturbing themes and arcs. No matter which one you pick, though, you’re bound to want a good, stiff drink afterwards.

Riders of Justice is a very darkly comic thriller with surprising depth and emotional weight, anchored by director Anders Thomas Jensen’s script of heavy themes such as probability, grief and anger, as well as some meaty and sympathetic lead performances including that of a virtually unrecognisable Mads Mikkelsen.

Riders of Justice will be released in UK cinemas on Friday 23rd July 2021 – click here to find a screening near you!