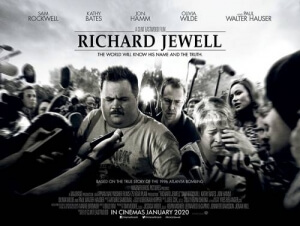 BASICALLY…: Despite saving hundreds of lives in the 1996 Atlanta bombing, security guard Richard Jewell becomes vilified in the press and by the FBI as a suspected terrorist…

Clint Eastwood turns 90 this year, a remarkable achievement in and of itself but none more so than the fact that he is still out there making movies, even at his grand age.  However, in recent years, the quality of work from the star-turned-director has been in a noticeable decline; ventures like Jersey Boys, Sully, J. Edgar, The Mule and especially The 15:17 to Paris have all failed to find the same successes as his past movies both critically and commercially, with many pointing out the growing lack of focus in these movies as well as a drier and slightly outdated mentality clouding over them. Some have attributed this to Eastwood’s age, which hardly seems fair because the guy clearly still knows how to make movies, regardless of their reception, but there is a depressing part inside each of us that is starting to wonder if Eastwood, after so many years in the spotlight, should really start to wind down and enjoy the remaining years of his life.

His latest film, Richard Jewell, only reinforces these feelings, because while it’s stronger than Eastwood’s last few movies – hell, compared to The 15:17 to Paris, it might as well be his next Oscar-winner for Best Picture – you can definitely tell that it was made by someone who is perhaps a bit more muddled than they usually are, resulting in a rather odd viewing experience.

The film tells the story of Richard Jewell (Paul Walter Hauser), a law-abiding security guard who, whilst surveying Centennial Park during the 1996 Atlanta Olympics, discovers a bomb in an unattended backpack, and gets people to safety before it explodes. Initially hailed as a hero, Jewell’s image begins to be tarnished when the FBI suspects Jewell of planting the bomb, which is soon reported by ambitious reporter Kathy Scruggs (Olivia Wilde) who kickstarts a media frenzy that makes his and his mother Bobbi’s (Kathy Bates) lives a living hell. With only his attorney Watson Bryant (Sam Rockwell) to help him through the FBI’s ruthless investigation, conducted by agent Tom Shaw (Jon Hamm), Jewell must fight to clear his name.

Richard Jewell has much more of a focus than Eastwood brought to the likes of The 15:17 to Paris, Sully and The Mule, possibly due to Billy Ray’s script which predominantly keeps things in line from a narrative standpoint. Though it is certainly not without its flaws – especially revolving around one particular character, who we’ll talk about soon – Ray’s script does have a clear three-act structure that’s easy enough to follow, albeit at the risk of simplifying the real events that unfolded, and has its heart in the right place when going into detail about the sheer railroading that this guy went through. It is also a very well-acted movie, with fine turns from Sam Rockwell, Jon Hamm and Kathy Bates (the latter of whom has just been Oscar-nominated for her performance here), and an exceptional Paul Walter Hauser who, after a brief period of playing idiotic man-children in the likes of I, Tonya, BlacKkKlansman and Late Night, finally gets to shine in a far more sympathetic role than he’s played before.

However, while Eastwood does still have an eye and ear for building tension and unease in certain scenes, there is something about his direction here that feels a little off. The movie feels very flat, with some of the more dramatic moments not landing as delicately as they probably should, because they’re executed in such a dry manner that much of the intended emotion is lost in the mix. The pacing is in line with some of Eastwood’s more recent movies, in that it will stretch out scenes where nothing particularly interesting is happening for far longer than necessary, and by the time it does reach a definitive ending it feels rather anti-climactic considering the amount of drama being built up around it. It’s also not a particularly interesting movie to look at, with the dull cinematography doing almost nothing to lighten things up (or at least, as light as a harrowing story such as this can realistically be), something that I’ve noticed Eastwood has been relying a lot on as of late, on top of overexaggerating elements of the truth as well as the roles of some actual people involved with the case itself.

That’s a good segue into this next point if there ever was one, because we’re about to discuss Kathy Scruggs, the character that Olivia Wilde plays. Scruggs’ portrayal has been the highlight of controversy surrounding this film, because it depicts her as a ruthless, arrogant and unashamedly villainous character, who goes so far as to offer sex to Jon Hamm’s FBI agent (who, unlike Scruggs, is not based on a real person and is instead a composite character of several other figures) in exchange for confidential information about the case. Taking Wilde’s performance out of the equation, because she does deliver a fun and over-the-top performance that’s entertaining despite the uncomfortable nature surrounding her depiction, it’s easy to understand why a lot of people have a problem with how Scruggs is depicted here, especially when she is no longer around to defend herself (she died in 2001). Ironically, for a movie that sets out to denounce the radical character assassination of its (male) title character, it doesn’t think twice before carrying out a radical character assassination of its own towards this woman, who is treated like a cackling Disney villain half the time with little humanity left in here; even her redemptive arc feels like an afterthought, because the movie spends so much time painting her as a heartless monster that any attempt to suddenly portray her as a human being feels as false as the articles written about the actual Richard Jewell.

While I cannot say that it is an especially great movie, with its rather flat execution and questionable characterisations, Richard Jewell is most certainly a step up for Eastwood as of late. However, something tells me that this level of quality is going to be the norm for his movies from here onwards as he gets older and a little more frail, and for a respected Oscar-winning filmmaker like Clint Eastwood to become trapped in this lull during the twilight of his career, it’s a little disheartening to witness.

Richard Jewell is a notable improvement on director Clint Eastwood’s recent disappointments, but a more focused script and some strong performances from the likes of Sam Rockwell, Kathy Bates and Paul Walter Hauser can’t be brought to life by Eastwood’s flat and dry direction, which makes bigger flaws like Olivia Wilde’s questionable depiction of reporter Kathy Scruggs stand out even more.

Want to decide what the movie’s like for yourself?
Check out Richard Jewell showtimes in London
via