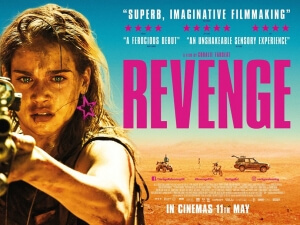 BASICALLY…: American socialite Jennifer (Lutz) is raped and disposed of by three men (Janssens, Colombe and Bouchède) – but unfortunately for them, she survives…

One of the most notorious rape-revenge exploitation movies is director Meir Zarchi’s 1978 film I Spit On Your Grave, and if you’ve ever heard about it then you’ll probably know why it has earned its notoriety. For the uninitiated, however, the film became extremely controversial upon its release for its depiction of violence and nudity, including an extended 30 minute gang rape sequence that led to severe outcries from critics such as Roger Ebert, who would later name it one of the worst movies he’d ever seen, and it became known as a “video nasty” in the UK where it subject to heavy cuts just so it could be released on home video with an 18 certificate in 2001, over two decades after its initial release. Though the film remains controversial, it is still seen by many as the archetypal example of the rape-revenge film sub-genre, and was even remade in 2010 but not to quite as high regard as the original would eventually receive (that’s basically code for “it sucked”).

Because of all the uproar, you wouldn’t think there’d be a film like that released in cinemas in this day and age, especially at a time where focus upon gender inequality and sexual harassment are huge topics within the industry, but debuting French writer-director Coralie Fargeat has not only crafted a modern rape-revenge story that’s both timely and extremely entertaining to watch, but although it shares no characters or any sense of continuity with the film it is conceptually a far superior remake of I Spit On Your Grave than the ACTUAL remake of I Spit On Your Grave.

Revenge follows the standard plot points that are expected in this kind of film, but context is everything; in this case, a young American named Jennifer (Matilda Lutz) is transported to a private getaway villa in the middle of the desert with her handsome – and married – French millionaire lover Richard (Kevin Janssens), ideally for a weekend of passion. Shortly after, however, Richard’s two hunting buddies Stanley (Vincent Colombe) and Dimitri (Guillaume Bouchède) also show up, and are immediately drawn to Jennifer’s alluring presence – so much so, that Stanley eventually takes it upon himself to brutally take advantage of her body. To save their own skins and to ensure she won’t talk, Richard pushes Jennifer off a cliff and leaves her for dead – which, of course, she isn’t, and she must now rehabilitate herself and avoid her assailants in the desert if she is to give them their comeuppance.

The presence of a female director and writer in the form of Fargeat offers a welcome perspective on the rape-revenge template, as she is far more concerned with the revenge half (hence the title of the movie) rather than the other one, which is merely the catalyst for everything that happens and, quite frankly, isn’t even the worst thing that this woman’s body goes through; seriously, she is shot at, impaled, beaten, nearly drowned, and in one scene even experiences a rough trip under the influence of peyote. All of that mercifully overshadows the actual rape part, which is thankfully handled tastefully but still leaves you feeling extremely uncomfortable (as it should do; it’s rape, after all), because unlike I Spit On Your Grave it only lasts a few minutes, and the majority of it happens off-screen. Instead, Fargeat’s focus is on this woman exacting vengeance on these three scumbags, and the results are gloriously gory; there is so much blood in this film that the film’s climax literally bastes itself in it, and there are some close-up shots of certain injuries that are sure to make some audiences gag, but from a technical standpoint the effects and make-up work is strong enough to make it seem so real and all the more (intentionally) repulsive. This is the kind of exploitation movie that is so rarely released in cinemas nowadays, and the way that Fargeat makes her film so intense but also so gratifying to watch is merely a reminder that the appeal, no matter how disgusting the subject matter, is still strong for this sub-genre – as long as it’s handled intelligently and responsibly, of course.

There’s not a whole lot of dialogue in the film, especially after the lead character is left for dead, and you don’t really get to know a whole lot about the protagonist like where she comes from or how she ended up with this sadistic creep of a lover, but Fargeat leaves enough of those details open for interpretation, and keeps the focus much more on what’s happening in the moment rather than linking it to something in their past history. The lack of dialogue does benefit lead actress Matilda Lutz, because the only other thing I’ve seen this actress in was the dire horror reboot Rings, and I remember stating in that review that she was very monotone in that performance. She is much better in this film, largely because it’s a stronger script and far superior direction, but her strongest scenes are actually the ones where she actually doesn’t have any dialogue (though in the few scenes where she does, she’s completely fine); her face isn’t the most expressive in cinema, but you can still tell what’s going on in her head just through simple body language and minor eye movements, and she does a competent job at making you want her character to really get some justice after experiencing such horrific treatment. Plus, one scene that sees her cauterise her wounds with an aluminium beer can gives her a branding that’s actually kind of bad-ass, which doesn’t really have anything to do with the performance but I just felt like pointing that out.

Though it seems like I’m stating the obvious, this movie is not for everyone. There are going to be some audiences that will not have any of this, especially given its rough on-screen depiction of sexual and physical violence, but lovers of that kind of exploitation film will be ecstatic that a worthy successor to I Spit On Your Grave is playing in cinemas for them to check out. Even if you’re hesitant, this is a Revenge that’s worth seeking out.

Revenge is a hardcore, ultra-violent and very entertaining rape-revenge exploitation film that benefits from a unique perspective from writer-director Coralie Fargeat, and is carried competently by the very game lead actress Matilda Lutz.