Respect (Review) – What You Want? Baby This Film Ain’t Got 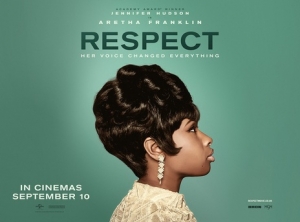 Up until her death in 2018, soul superstar Aretha Franklin was heavily involved in the first official biopic to be made of her life and career, even when Jennifer Hudson was cast to play the singer. According to reports, Franklin even stated that the former American Idol contestant would win her second Oscar – her first being for her memorable movie debut in Dreamgirls – for what would end up being Respect, named after arguably the singer’s most famous track.

However, Franklin’s prediction might have been a little too optimistic. Sure, Jennifer Hudson is excellent in the film, and might well even be featured on a few lists by the end of the year, but her great performance alone doesn’t automatically guarantee across-the-board recognition, especially considering the fact that Respect itself, a disappointingly by-the-numbers biopic, is unlikely to stand out in the current awards race.

The film, directed by Liesl Tommy as her feature debut, predictably takes us on a journey through Franklin’s life, from her childhood – where she is played by young Skye Dakota Turner, while Hudson plays her as an adult – to the recording of what would be her best-selling album, Amazing Grace (the documentary for which was finally shown to audiences in 2019). As a child, her father C.L. Franklin (Forest Whitaker) parades her around at parties and shows off her impressive voice to his guests, and during this period the movie also shows that she became pregnant following some sexual abuse, which the movie alarmingly glosses over despite this surely being a very traumatic moment in her early life. Anyway, as an adult, Franklin initially struggles to make a career out of her singing talents, but it’s not until she partners with husband and manager Ted White (Marlon Wayans) that she begins to break out with songs like “I Never Loved A Man (The Way I Love You)” and, of course, “Respect”. However, Franklin’s international success leads to further personal problems, including White’s horrific abuse and her rampant alcoholism, which she must overcome in order to give herself the respect she deserves.

In other words, you’ve seen this kind of musical biopic many, many times over. Whether we’re talking about Ray or Bohemian Rhapsody, or even elements of What’s Love Got To Do With It with the film’s grim depiction of spousal abuse, so much of Respect’s storytelling structure and depiction of major milestones in the life and career of its subject, major or minor, relies heavily on the same biopic formula that also dominated those other films. You can play musical biopic bingo alongside this film, marking every moment when the subject is told early on that she’ll never make it as a singer, or when she drunkenly fumbles a stage performance, or when she is mistreated by a close one, or whenever she is introduced to a prominent figure who’s always conveniently introduced by their full name, so that the audience knows who they are. By sticking to this formula, the movie plays it very safe and – just like with Bohemian Rhapsody – it portrays this very unconventional, barrier-breaking musical talent with an undermining amount of normalcy, and since it’s also a two-and-a-half hour movie (half an hour of which could easily have been removed, at the very least) it becomes numbing to a point where you’re just not invested in the story, because you’ve seen it so many times involving other artists.

Respect is pretty much exactly what I thought it was going to be: a very average look at the life of an extremely talented singer like Aretha Franklin that plays it far too safe, glosses over some very dark moments in her history – seriously, that whole “getting pregnant as a child due to molestation” thing is almost never followed up on – and has the committed performance of its lead to act as its only shining beacon. Jennifer Hudson is definitely the best thing about Respect, for her performance is commanding and heavily engaging, and of course her own singing voice is unparalleled, but her strong turn deserves to be in a much more impactful and less streamlined account of Aretha Franklin’s life. Director Liesl Tommy and writer Tracey Scott Wilson fall too far into the same trap that even some of the more successful musical biopics fall into, with its overly sentimental tone, cheesy empowering dialogue, and exposition filling in some events that might have actually been worthwhile showing onscreen (Franklin’s contributions to the Civil Rights Movement, including her friendship with Dr. Martin Luther King Jr, are summed up in clunkily descriptive dialogue). In short, it’s just not the right movie to honour Aretha Franklin’s legacy, at least in terms of her unique and provocative spirit.

As highly complementary as the late Aretha Franklin’s prediction may be, Jennifer Hudson – and Respect as a whole – sadly doesn’t seem likely to be taking home that Oscar any time soon.

Respect is a disappointingly by-the-numbers biopic on the legendary soul singer Aretha Franklin, which despite Jennifer Hudson’s commanding central performance operates on a safe, familiar formula which undermines the singer’s unique contribution to the world.

Respect is now showing in cinemas nationwide – click here to find a screening near you!