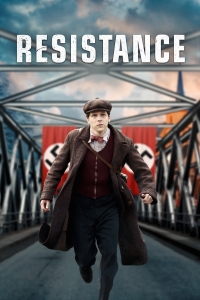 There is not a doubt in my mind that the makers of Resistance had nothing but the best of intentions when they signed on to this film. It is bringing to light a rather fascinating story of war-time heroics, particularly that of Marcel Marceau, the legendary mime who played a vital part in helping thousands of orphaned children escape the Nazis. His story has “inspirational historical drama” written all over it, and if executed well it could indeed be a captivating portrayal of a mostly unknown story.

Unfortunately, the film doesn’t end up doing a whole lot with the material, and it comes off as a slightly awkward and incredibly generic movie that undermines the real impact that the actual events made.

You can tell the movie is going to be a confusing sit from the first five minutes; after a devastating 1938 prologue featuring a young Jewish girl named Elsbeth (played by Game of Thrones scene-stealer Bella Ramsey), we suddenly jump forward in time to 1945, when US General George S. Patton (Ed Harris) is giving a speech to his troops… before then jumping right back to 1938, when the story begins proper with young Marceau (Jesse Eisenberg) being roped into assisting and caring for a large number of orphaned children. Even when it finally settles on that one narrative – rendering the Ed Harris wrap-around segment as almost completely unnecessary, as well as feeling so tacked-on at the last minute – the story is still hard to fully define, because there is little time to process any of it; as soon as Marceau proves himself to be a valuable member of the team by entertaining the children with his talents as a mime, we’re suddenly whizzing forward to 1942, when the Nazis have invaded France and Marceau – out of nowhere – decides he wants to join the French Jewish Resistance. Only in the film’s third act does it finally get to the reason why Marceau became so renowned for his war-time efforts, and by then you’re so worn out by the constant jumps in time and the lack of any real depth to the characters that you really just don’t care anymore.

The movie has such a disjointed narrative that it reduces whatever investment you may have otherwise had in this story. You barely get to know many of the characters aside from their most basic of traits, and because of that you don’t feel much sympathy for them when they’re facing off against the enemy; even the Nazi characters are given more dimensions than our heroes, like real-life Gestapo agent Klaus Barbie who we see be intimidating and menacing during some intense sequences, but also caring and loving around his wife and newborn child (though, of course, that doesn’t mean he’s immediately more likeable). Several plot points introduced early on will also fizzle out unceremoniously, such as Marceau’s tricky relationship with his Jewish father who opposes his son’s foray into the arts – which always feels like it’s one “I have no son” moment away from turning into The Jazz Singer – and an impending romance between Marceau and Clémence Poésy’s Emma. There doesn’t seem to be enough focus in this script to make it either a compelling war drama, or a straightforward biopic about Marcel Marceau’s early year; instead, it’s all over the place, which must seem frustrating to anyone who isn’t familiar with this person or the rather noble things that he did (which, given how little-know the story actually is, is probably a lot of you).

It’s a shame that it doesn’t really work, because you can definitely tell that the people who made it put a lot of effort into bringing this story to the screen. It’s a well-made film, with some good cinematography and set designs that director  Jonathan Jakubowicz flaunts at every available opportunity; it’s also a well-acted film, with Jesse Eisenberg delivering a very physical performance as Marcel Marceau that captures the legendary figure’s style almost perfectly. However, it only makes this film feel more like a wasted opportunity, because here you have a fascinating and inspirational tale in the hands of filmmakers and actors who clearly have talent to spare, all of which is let down by a script which settles for a generic and rather bland approach that doesn’t make any of it feel exciting or even interesting. It’s a script that does not give you enough time with these people to learn more or care about them, and the disjointed pace doesn’t allow for many of the events to feel as captivating as they should probably be for an audience; by the time the film ends, it’s rather sudden but also surprising because nothing about what came before felt like it was a proper climax.

Though the good intentions and the reasonably strong filmmaking prevent it from being anywhere close to the bottom of 2020’s movie pile, Resistance is still a disappointment because it could have really been something intriguing rather than the forgettable thriller that it is. A story like this deserves better treatment, but until we get a much more straightforward biopic of Marcel Marceau which goes a lot deeper into both story and character, this will have to do for the time being.

Resistance is well-made and well-acted, but it doesn’t stop the script from adapting the fascinating real-life story and its legendary central figures into a generic and forgettable wartime drama that feels like a disappointing waste of material and talent.

Want to decide what the movie’s like for yourself?
Check out Resistance
via