Reminiscence (Review) – Less Memorable Than The Movies It’s Borrowing From 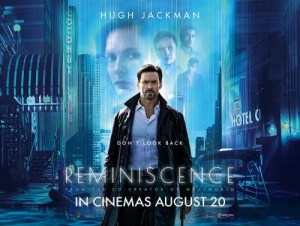 BASICALLY…: In a future where it’s possible for people to relive past memories, a veteran (Jackman) uses the technology to dive deeper into a mystery…

Lisa Joy became known for co-creating, as well as writing and directing several episodes of, the hit TV show Westworld, which was based on the Michael Crichton film that the Jurassic Park author wrote and directed. It therefore only makes sense that her first step into feature filmmaking also adapts the work of another famed sci-fi writer, Philip K. Dick – the only problem is, Reminiscence isn’t actually based on any of his stories.

While it is technically an original script, Joy’s film still manages to borrow extremely heavily from the author’s works, specifically the stories that would become better known in the film world as Blade Runner, Minority Report and Total Recall. The influences are too great to ignore, and instead of being sucked into the narrative that it’s trying to establish, the whole time you’re just thinking about how much better and – ironically – more original those other films were.

Set in a future Miami that has largely succumbed to rising ocean waters and all sorts of political corruption, a man named Nick Bannister (Hugh Jackman) makes a living out of providing people access to their most cherished memories, via a device he operates with his trusted colleague Watts (Thandiwe Newton). One evening, a woman named Mae (Rebecca Ferguson) walks in asking for Nick’s help with finding some lost keys, and soon the two of them spark a romantic affair with one another, which abruptly ends when Mae suddenly disappears. Obsessed with finding Mae, Nick dives into his own memories to piece together the clues as to where she may be, uncovering a much larger scheme involving Louisiana gangsters, corrupt cops, and the crazy exploits of the wealthier citizens over its poorer folk (social commentary klaxon!).

Right away, you can pick up on the influences of those actual Philip K. Dick adaptations, from the film-noir tone and cinematography of Blade Runner (the film even has Hugh Jackman narrating the movie, similar to Harrison Ford’s infamously out-of-place voiceover in the theatrical cut of the classic Ridley Scott film), to the plot revolving around accessing people’s past memories in ways that aren’t dissimilar to Minority Report and Total Recall. The list of movies that you’re constantly reminded of during Reminiscence aren’t just limited to Philip K. Dick adaptations, for the water-soaked sets and societies trigger memories of Waterworld, while there are not-so-subtle nods to films like Inception, Casablanca and even Who Framed Roger Rabbit (Rebecca Ferguson’s femme fatale Mae is a lounge singer, sporting a very Jessica Rabbit-like red dress during an equally sultry number). Needless to say, it’s not a very original film, but the fact that you remember any of those older films way more than the one you’re actually watching is surely a sign that not enough has been done to give Reminiscence enough of its own identity to look past its glaring influences.

Case in point, Joy’s script is made up of a lot of repeated scenes that always lead to the same resolution: Thandiwe Newton’s Watts tells Hugh Jackman’s Nick that it’s dangerous to rely too much on memories, Nick says it’s fine, and then they move on to other things. Scenes like that happen at least a few times before something different finally does happen, and by that point you’re so lost from the constant exposition provided by either secondary characters or Hugh Jackman’s overwritten narration that you’ve begun thinking about further questions regarding how certain things in this universe actually work. There is certainly ambition in Joy’s storytelling, and her direction suggests a sense of grandness that the reasonably grounded script doesn’t entirely allow, but it’s bogged down by plenty of loose story threads which either aren’t explored thoroughly enough, or are halted as quickly as they’re introduced; at one point, the film becomes about this weird gangster played by Daniel Wu, and just as it sets this character up as a major player he’s very quickly taken out of the picture.

It’s not a completely wasteful picture, for the presence of actors like Hugh Jackman and Rebecca Ferguson are almost always guaranteed to deliver strong emotional performances, and the cinematography is nice as it captures the grimy and dark dystopia of this future society. However, the material they’re working from is rather derivative, always reminding you of so many other sci-fi film-noirs you could be watching instead, and which also take a few more chances in their storytelling and overall visual style that have turned them into the cult classics that they are today.

Not so much with Reminiscence, which is destined to stay right at the back of everyone’s memories.

Reminiscence dampens its ambitious intentions with a largely derivative script that borrows far too heavily from the likes of Blade Runner and Minority Report to name a few, which always reminds you of how much better and original those movies are compared to this.

Reminiscence is now showing in cinemas nationwide – click here to find a screening near you!