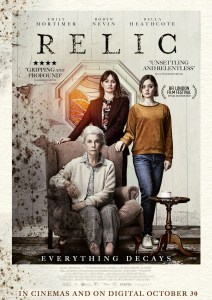 Beyond all the ghosts, slashers, aliens and zombies, the biggest horror monster of all is life itself; particularly, what happens when eventually it starts to run out. For her effective directorial debut, Natalie Erika James takes something as simple as old-age, along with the deteriorating mental conditions that tend to come with it, and turns it into both a chilling breakdown of slowly losing someone you’ve known and loved all your life, and also a surprisingly effective drama about three generations of women coming together for one last time before the inevitable happens.

In Relic, a woman named Kay (Emily Mortimer) and her daughter Sam (Bella Heathcote) travel to their respective mother and grandmother Edna’s (Robyn Nevin) estate home when she is reported missing. After a few days’ search, and sorting through the slowly decaying house – the walls are covered in black mould, and the food is slowly rotting – Edna suddenly shows back up in seemingly sound mind and body, despite not remembering where she had been the last short while. As Kay and Sam spend some time with her, they start to notice that she is beginning to act incredibly odd, from talking to people that aren’t there to burying old photo albums in the yard. Soon, it becomes incredibly apparent that something is taking over her and, if mother and daughter aren’t careful, might be after them next.

Having seen elderly family members go through a number of deteriorating mental problems over my lifetime, from Alzheimer’s to Lewy Body Disease, Relic obviously hit close to home quite a few times. While it’s clearly depicting dementia like it’s an incredibly scary thing – which, honestly, it kind of is – there are scenes in the movie, whether it’s elderly Edna failing to recognise her own family or destroying precious items out of pure frustration, that feel extremely true to how difficult it can be to look after someone with that condition. The details feel like they come from someone who’s had experience with caring for a close relative with dementia (well, maybe not exactly like it is in this film), and it must have been enough of a traumatic experience for them to craft a horror movie around it with scares that are genuinely chilling and not as in-your-face or obvious as many other horror films nowadays.

Natalie Erika James’ direction has a level of sophistication which certainly adopts a slow-burn approach to the scares and its chilling climax, and as we spend a lot of time with these three characters we do get to understand both their relationships with each other – Kaye, for example, doesn’t appear to be as close with her mother as Sam is to her grandmother – and also why they don’t simply do what most other people would already decide by that point. James’ script, co-written by Christian White, smartly uses the characters’ uneven relationships with the matriarch as the branching-off point for some of the film’s most memorable moments which don’t even have a single scare in them. When the film does veer much further into horror territory, the scares come with a subtle knock – shadowy figures will come into the frame without a sudden music stinger accompanying it, thereby making the shot a whole lot creepier – and incorporate some claustrophobic set design and, when required, some impressive practical effects work.

The final few minutes of the film beautifully encompass both the supernatural horror and the generational drama for a wordless epilogue that manages to both send chills down your spine and also move you almost to the verge of tears. It’s a fitting conclusion to a film that will certainly make anyone feel uneasy, especially those who have seen first-hand how tricky it can be to care for someone who’s clearly slipping from your grasp, but leaves you with a soothing portrayal of how those twilight years don’t necessarily have to be spent decaying alone. Both an effective horror and a meditative family drama, Relic is a stable horror you won’t soon forget.

Relic is both an effective horror, with some creepy and subtle scares dominating the background, and a surprisingly emotional generational drama that deals with the difficulty of slowly losing a beloved family member to a degenerative mental disease, albeit in a heightened and incredibly creepy manner, but remains no less moving by its stunning conclusion.