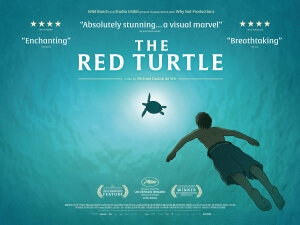 CAST: Nobody – it’s a dialogue-free animated film. Moving on…

BASICALLY…: A man is marooned on a desert island, and his attempts to escape are thwarted by a big red turtle, which turns out to have a major impact on his life…

If you haven’t heard of Dutch animator Michaël Dudok de Wit, get ready to hear that name a lot when it comes to discussing key animators of this day and age.

He began his career making advertisements for companies like AT&T and United Airlines, but began a career in short filmmaking in the early 90s onwards, with animated vignettes like Tom Sweep, The Monk and the Fish, The Aroma of Tea and Father and Daughter, the latter of which earned him an Academy Award for Best Animated Short. You can find these shorts on YouTube, which I highly recommend you do because they’re wonderful pieces of work… in fact, I’ll do you one better:

There, now you have no excuse.

But why the sudden career retrospective on an animator who up until now you probably never knew even existed? Well, you’re going to want to know as much as you can about Michaël Dudok de Wit because if his feature film debut The Red Turtle is any indication, he could well emerge as a new animation pioneer for audiences to flock to the same way they would a Studio Ghibli film.

Ghibli, by the way, co-produced The Red Turtle in a first for the anime studio, with Dudok de Wit being given full reign over style, story, and pretty much everything else involved with the production, and luckily he’s chosen a rather magical and breathtakingly beautiful story to make his claim on the animated feature market. We follow a nameless man as she’s shipwrecked and marooned on a deserted island in the middle of the ocean, all alone except for the crabs and fish that occupy the beach and surrounding seas. His efforts to build a raft and sail away are all met with disaster, primarily due to a large red turtle that keeps destroying the makeshift raft just as it reaches the ocean. However, a close encounter with the turtle leads to a miraculous turn of events, which changes the man’s life forever (no spoilers, because it’s best experienced with as fresh eyes as possible).

The first thing to note is that this film is entirely dialogue-free; aside from a few grunts, heavy breathing, and the odd yelling of “Hey!” into the distance, not a single word is spoken in the entire thing. This keeps the storytelling limited exclusively to the visuals, which is where Dudok de Wit truly shines as this is an absolutely beautiful film to look at, with every bit of scenery and atmosphere meticulously hand-drawn and completely seamless. After a while, you don’t even notice the lack of dialogue, because the visuals are doing such a fantastic job of telling the story without uttering a single word; right away, you know what this guy is thinking and feeling as he’s alone on this island, and without giving too much away you completely get his relationship to other figures he comes across, and vice versa. Watching the film in this way is like listening to a fairy tale for the first time, when all you can picture in your head as you listen to the story are the visuals that you imagine would go along with it, sending your imagination into overdrive. Dudok de Wit, over his career thus far, has thrived in this kind of visual storytelling, and The Red Turtle is a fantastically realised expansion of his talents that rightfully bring them to the attention of much wider audiences.

The beautiful animation also helps advance its strong grasp on emotion, as it manages to create all sorts of wondrous feelings through the mere scope of its simple but effective imagery. All sorts of emotions arise from just how Dudok de Wit and his strong team of animators frame a scene, whether they be feelings of loneliness, love, playfulness, despair, and especially heartbreak. It’s all glimpsed through the facial expressions on characters’ faces, or through the vast landscapes of this island and the giant, empty ocean surrounding it, and every time it’s simply marvellous. I get the feeling that future animation students will be watching this film with great intensity, if only to discover how they managed to make such a grand, effortlessly beautiful piece of animation convey such emotion and drama without a single line of dialogue, and how they can learn from its technique and possibly put it to good use in their own projects.

In a market overly saturated by CG animation, it’s inspiring to still see such effort and intense beauty put into something that was mostly crafted entirely by hand (the turtles are 3D animated, only due to their complicated rendering), and even better have such emotional drama and light-hearted storytelling injected into it without once feeling forced. It’s a simply magnificent achievement for Dudok de Wit, Studio Ghibli and everyone else involved with its making, and one to absolutely check out if you’re a hardcore sucker for animation or just great visual storytelling in general.

The Red Turtle is a magnificent achievement in both animation and visual storytelling for debuting feature director Michaël Dudok de Wit, conveying the most effective of human emotions and its simple but heartwrenching plot without a single line of dialogue, a technique executed flawlessly here that it puts dozens of other lesser animated films to shame, leading it to quite possibly become a must-watch for any future animator if its spirit and techniques are to stay alive in an overly-CG market.