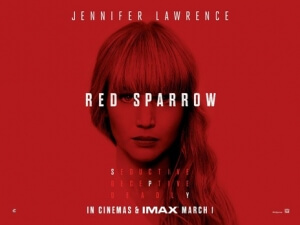 BASICALLY…: A Russian ballerina (Lawrence) is trained to become a covert spy, and finds her loyalties tested when she falls for an American CIA officer (Edgerton)…

The Internet can be a dark place to be if you’re a high-profile celebrity like Jennifer Lawrence, who has been the subject of a severe and sudden backlash over the last couple of years, mostly from online trolls who apparently want to punish her for the mere crime of existing. Like most people, I think Lawrence is a genuinely great talent who always seems to sink herself into whatever role she is given, from franchise fare like the Hunger Games movies to the complete and utter insanity that was last year’s mother!, but there are sadly those out there who think that she is a complete waste of space and should be subjected to the worst kinds of torture for her “crimes”.

Those people will probably be very excited about Red Sparrow, which should really be titled How Many Terrible Things Can Happen To Jennifer Lawrence In One Movie because man, does she just have one horrible thing after another happen to her in this film, quite gratuitously and often hard to watch. However, they will still most likely be mad (because they’re Internet trolls, and they’re never satisfied) because not only is Lawrence so great in this movie, in one of her most provocative performances to date, but the film surrounding her isn’t half bad either.

Lawrence is Dominika, a Russian prima ballerina who struggles to find a way to afford healthcare for her ailing mother (Joely Richardson), especially after she injures her leg during a performance. Her uncle Ivan (Matthias Schoenaerts), a high-ranking official in the Russian government, soon offers her a way to get what she needs, which involves her being trained to become a covert “Red Sparrow” intelligence officer. She is later assigned a task to win the trust of Nate Nash (Joel Edgerton), an American CIA operative located in Budapest, in order to obtain the identity of a mole in the Russian government, but her conflicting opinions on how her government operates leads her to consider becoming a double agent for the Americans.

I’m not going to lie, this may be the most physically demanding role that Jennifer Lawrence has yet undertaken, and that’s including all four Hunger Games movies. Her character goes through such horrendous ordeals in this movie, making the accident she suffers at the beginning of the movie feel like a light sprain by comparison; over the course of the film’s 140-minute running time, she is brutally tortured, raped, slashed with a knife, psychologically and verbally berated by her superiors, completely humiliated while she attends what she refers to as “whore school”, where she is told to strip naked in front of an entire class and give a potential rapist exactly what he wants – and that’s not even half of it. It’s some seriously disturbing stuff that she has to take on the cheek in this movie (figuratively and literally), and yet Lawrence doesn’t shy away from any of it in a performance that is the very definition of “fearless”; she really commits to the brutality of this world without wincing, which for a role like this which must have been very difficult to bring to life should earn her some serious points for going all in at every opportunity.

The rest of the film is an entertaining – in the loosest of terms, because you’re still watching torture and rape for part of it – thrill ride that keeps you hooked on how this is all going to end up, and I was never bored even though it clocks in at well over two hours. This is a very real spy movie, as far away from 007 as you can get, and it’s one that you can tell is made as much for adults as it possibly can be, so it involves a lot of covert operations as well as dark and grisly scenes of torture and deception, like a truthful espionage movie should be. I’m not going to act like this is high art, nor am I under any false pretences that this is intelligent storytelling, which it probably isn’t, but director Francis Lawrence – who worked with the totally-not-related Jennifer Lawrence on three out of four Hunger Games movies – is able to make it as fascinating to watch as it is tough to stomach with the sheer brutality of it all. It’s not always easy to follow, and you may find yourself to read the Wikipedia page to pick up on plot threads you may have missed, but you’re still invested in what’s going to happen to these characters, because they’re acted well and written fairly solidly that you care and root for them even when they’re at their lowest point.

It will most certainly not appeal to everyone, especially those who are quite squeamish when it comes to extremely brutal on-screen violence like the kind you’ll see in this film, which may damage its overall longevity with audiences (because really, who wants to see a movie where Jennifer Lawrence has horrible things happen to her over and over again more than once?). It’s certainly not winning over critics that much, as it currently has a middling 51% on Rotten Tomatoes as of this review, but I found it to be an intense and very intriguing spy thriller that benefits greatly from the completely fearless performance of its lead actress, which was enough for me to overlook some of its more biting flaws.

But next time you want to subject us to Jennifer Lawrence being tortured on-screen, just re-release Joy; that movie was torturous enough on its own even without her involvement.

Red Sparrow can be a brutal and often hard to stomach spy thriller, on account of its horrific scenes of violence and torture towards its main character, but the fearless lead performance by Jennifer Lawrence is so strong that it’s almost enough to overlook some of its more gaping flaws.