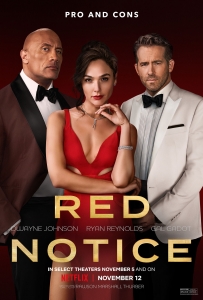 BASICALLY…: An FBI profiler (Johnson) and a wanted con artist (Reynolds) team up to take down the world’s greatest thief (Gadot)…

Budgeted at $200 million, Red Notice is by far Netflix’s most costly attempt to kick-start a new movie franchise. Its international destinations, an action-adventure plot reminiscent of a modern-day Indiana Jones, and of course three of today’s biggest A-list actors certainly add up to that amount, and to its credit you can definitely see most of the money being put to decent use on-screen.

And yet, for all the money and extravagance, Red Notice lacks something fundamental if it wants to last as an ongoing movie series: a soul.

Writer-director Rawson Marshall Thurber’s oddly mirthless star vehicle is a movie at war with itself: on the one hand, it wants to be your typical post-modern action-adventure with giant set-pieces and charismatic leads, and at times it works fine as just that, but it also feels constrained by its own adequacy thanks to a script which, despite its many locations around the world and desperate attempts to appear fun and exciting, relies far too much on traditional values to feel truly ambitious.

The set-up is that FBI profiler John Hartley (Dwayne Johnson) is on the hunt for criminals who have been issued a red notice, the highest-level arrest warrant issued by Interpol: specifically, he is after wily con-man Nolan Booth (Ryan Reynolds), and world-renowned thief Sarah Black (Gal Gadot), known as “The Bishop”, who Booth desperately wants to dethrone as the greatest criminal on the planet. Both of them are after a trio of legendary gold eggs that once belonged to Cleopatra, but while two of them are under heavy lock and key around the world, the third remains hidden – this is where Hartley, who is suddenly framed for the theft of an egg, teams up with Booth in order to try and find it as well as recover the other two eggs in order to clear his name, so long as The Bishop doesn’t beat the two of them to the punch.

The fact that Red Notice operates on very familiar action-adventure territory shouldn’t be much of a surprise; however, it’s the simple truth that the movie doesn’t do much else with the numerous recognisable conventions of such a flick, other than add a thick layer of snark and self-awareness, that ultimately leaves it lacking. The plot, explained via a handful of exposition dumps, is so simple that it’s almost suspicious, and though there’s not really a sense that the movie is taking itself too seriously, there is also such a thing as being so aware of its own conventions that it frequently stops dead in its tracks so that actors like Ryan Reynolds can riff on the very conventions it’s running with.

Speaking of the actors, it is by the grace and magic of their on-screen charm that Red Notice just barely gets its head above water; Johnson, Reynolds and Gadot are having lots of fun here, and it shows in a lot of their scenes together where their chemistry can become electrifying, with Johnson and Reynolds going through the standard motions of a mismatched bromance that plays out exactly how you may imagine it, but is made tolerable by their commitment to the otherwise pedestrian material. Their characters, on the other hand, are nothing more than just extended versions of their established star personas, especially Reynolds who is in full Deadpool mode here as he wisecracks through the whole thing like he’s auditioning for Mystery Science Theatre 3000. Admittedly, his schtick can get a little tiresome after a short while, and to a point you sympathise with Johnson being stuck with this guy for the whole movie, but at least Reynolds’ material here is better written and executed than The Hitman’s Wife’s Bodyguard from earlier this year.

The reason you know and like these main characters is because of who they’re played by and not because of how they’re written, which is ultimately where Red Notice really doesn’t meet its potential. Rawson Marshall Thurber can’t find a way to make his plot or characters interesting enough to make for a wholly satisfying experience; by the time we reach the third act, there’s not been a strong enough reason to care about most things in order to get fully invested in the stakes or the action (most of which is accompanied by some noticeably bad green-screen effects that, for a $200 million movie, feels embarrassing). You’re just simply watching a movie happen right in front of you, one that goes through all the expected motions but with very little of the genuine intrigue to properly hook you in.

The sheer star-power may indeed kick-start a new Netflix franchise – especially as the final few scenes sequel-bait so hard it’s almost unbearable – but if it’s to have longevity and become the next big action-adventure movie series, Red Notice needs to be a lot more adventurous in the future.

Red Notice relies heavily on the charismatic star power of leads Dwayne Johnson, Ryan Reynolds and Gal Gadot to cover for an oddly mirthless action-adventure script with surprisingly little ambition and a disappointing lack of genuine intrigue and investment.