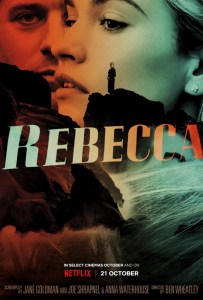 BASICALLY…: A young newlywed (James) discovers that her husband (Hammer) is still haunted by the memory of his first wife, a woman named Rebecca…

After making a number of grisly but eye-catching genre movies from Kill List to Free Fire, you’d forgive Ben Wheatley for wanting to take on some considerably lighter material for his next outing as director. Although, having seen his handsome but forgettable take on the classic gothic novel by Daphne du Maurier, you’re left with a resounding eagerness for him to get back to hyper-stylised violence as soon as possible.

The problem with material like Rebecca, du Maurier’s most famous novel, isn’t that it’s necessarily bad, but it’s been done so much better already by someone else. The version that I’m referring to is, of course, the 1940 adaptation by none other than director Alfred Hitchcock, which not only remains a classic amongst critics – who contributed to the film’s steady 100% rating on Rotten Tomatoes – and audiences – who ensured the film was a box office success, taking in $6 million against its $1.29 million budget – but was the recipient of a number of Oscar nominations, winning two including Best Picture. With that kind of pedigree, anything else that tries to do the exact same thing will immediately be compared in a lesser light, and as stylish a filmmaker as Ben Wheatley is, he is not exactly Hitchcock, as evidenced in his version of the story which cannot match the suspense and intrigue that the legendary director provided.

The story, if you’re not familiar, introduces our unnamed protagonist, a young woman played by Lily James, while she’s working as an assistant to a catty American social climber (Ann Dowd) in Monte Carlo. She soon crosses paths with the wealthy Maximillian de Winter (a British-accented Armie Hammer, doing his best not to be his Man from U.N.C.L.E. co-star Henry Cavill), and after a brief romance the two are quickly wed, with the new Mrs. de Winter being transported to his large estate of Manderlay. Upon arrival, she is subject to cruel treatment by the cold housekeeper Mrs. Danvers (Kristin Scott Thomas, clearly having fun in the role while playing it like a stone-faced pantomime villain), who constantly puts her down in favour of Maxim’s deceased former wife Rebecca, who everyone around her – including Maxim – seems to still be entirely obsessed with, causing the new Mrs. de Winter to slowly lose control of her seemingly blissful new life.

There are definitely things to admire about Wheatley’s film; for instance, it is a very nice-looking movie, with handsome production design and some eye-catching costumes which certainly pop with colour and character, even if sometimes the wardrobe that Lily James and her co-stars are given feels less like the 1930s and more like a New Look advert set in the 1930s. The acting, too, is strong; as campy or over-the-top some of the performances are, there is still a lot of effort being put into them, and they are clearly having fun with playing these larger-than-life characters that du Maurier originally wrote (Wheatley regular Sam Riley pops up a bit later in a pivotal role, and he’s Gaston-ing the hell out of his performance more than Luke Evans did in the live-action Beauty and the Beast). As ever, Wheatley brings to the party his usual bizarre camera tricks during certain sequences, and when they work they can certainly be stylish and cool to look at, proving that he is at the very least an interesting director when it comes to the overall visual palate of the movie in question.

However, Wheatley’s main problem lies in the script, written by Jane Goldman and co-written by Joe Shrapnel and Anna Waterhouse. There simply isn’t a good enough reason to care about any of the drama here, because the characters are portrayed as either too passive or too uninteresting to fully get behind; although James and Hammer share fine chemistry together, their ultimate connection hinges on something which could easily be solved by a mere conversation, and even when James is eager to investigate the mystery surrounding its titular and entirely unseen character of Rebecca, she soon drops her interest mere scenes later in favour of something else, which for all I know would make her portrayal of Cinderella want to shout “do something!”. Again, none of this is really down to the actors, who do well with what they’re given, although for a character who at first is supposed to be mostly unimpressive and plain until she’s swept off her feet, Lily James can’t help but be a little miscast.

Not even Wheatley, for all his intrigue and style as a filmmaker, can bring this largely mundane script to life, often feeling like he’s directing the world’s most standard episode of Downton Abbey whilst on auto-pilot compared to more adventurous outings like Sightseers or High-Rise. Wheatley just lets most of his scenes play out as they need to, without adding enough spice to them or even a stylish flare that any other director could easily have brought to the table; just by looking at the film, it honestly comes across as a massive surprise that it was even directed by Ben Wheatley, because it feels so far removed from his usual style that it might as well be by someone else. While I wouldn’t go so far as to say it’s his weakest film, it’s by far his most mundane, which somehow makes it all the more disappointing.

It’s a good thing it’s coming to Netflix (after a limited theatrical run), because that’s where an entirely mediocre film like this belongs. Next time, Ben, maybe leave the suspense to Hitchcock.

Rebecca is a disappointingly mundane adaptation of the classic gothic novel by Daphne du Maurier, previously adapted into the far superior 1940 Oscar-winner by Alfred Hitchcock, which this version’s director Ben Wheatley can’t match the intrigue or even the style of, despite handsome production values and some memorable performances.