Ready or Not (Review)

Ready or Not (Review) 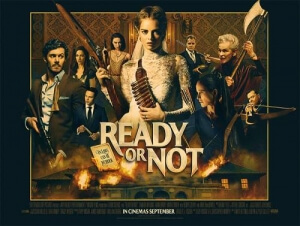 BASICALLY…: On her wedding night, Grace (Weaving) is hunted by her new in-laws during a deadly game of hide-and-seek…

When Universal recently cancelled the release of their The Most Dangerous Game-inspired horror thriller The Hunt, in the wake of the recent mass shootings in America, the decision was widely seen as a sensitive move – however, some were quick to point out the hypocrisy of other, more gun-friendly movies such as Universal’s own Hobbs & Shaw still being shown in cinemas nationwide, despite them being a lot more accessible to audiences than The Hunt would have likely been.

It’s also hard not to feel a little uncomfortable knowing that even in the wake of the numerous tragedies, Fox Searchlight still decided to release Ready or Not – the poster for which features multiple characters holding firearms in various badass poses, including the main character who sports a belt of bullets across her body – as a fairly wide release, which probably explains its low positioning during its first weekend at the US box office. Timing aside, though, its recent sixth-place debut (even though it’s already made back almost double its $6 million budget as of this review) is a little disheartening, because the movie is actually a very entertaining cat-and-mouse thriller that contains a lot of laughs, gory thrills and wildly unpredictable twists that keep you completely hooked.

The action takes place mostly on the wedding day of Grace (Samara Weaving) and Alex Le Domas (Mark O’Brien), the latter of whom belongs to a wealthy family that has made its fortune from several board games. Before the newlyweds can finally relax, though, Grace is invited by the family to partake in an old-standing tradition when it comes to new additions, where she picks a random game from a mysterious box and then they play it, after which she will finally be accepted as one of their own. She ends up picking hide-and-seek, to her bemusement but to everyone else’s shock and even horror – she later finds out that the game is deadly, as the family have sinister intentions for their guest if they find her within their large mansion, and the night turns into a desperate mission to survive the in-laws, in more ways than one.

Narratively, it’s not hugely different from many of the other films to be inspired by Richard Connell’s classic short story The Most Dangerous Game, complete with a sly commentary on the privileges of the wealthy upper-class, but the film – directed by Matt Bettinelli-Olpin and Tyler Gillett, collectively known as Radio Silence – sets itself apart in many other areas. For one, the humour is pitch-black with a lot of the chuckles coming from the sudden gore that will just happen out of nowhere, as well as the bumbling and manic behaviour of some of the rich hunters, which fits right into that fun stereotype of the clueless one-percenter that’s suddenly expected to carry out a very disturbing task. Lead actress Samara Weaving, who previously showed the world her talents for comedy during a small role in Three Billboards Outside Ebbing, Missouri, is deliciously deadpan here and has very expressive eyes which convey so much wit and irony that she easily carries not just the funnier moments of the film but also the most intense ones, some of which see her be absolutely terrified beyond belief but also be legitimately funny.

It refreshingly does a lot more with characters than you’d probably expect from a movie like this; outside of the main character, who you certainly feel for in the moment, the film also takes time to develop some of the villains and how they feel about all of this carnage. Some of them, such as Adam Brody’s alcoholic older brother, are clearly traumatised by previous similar events – hinted at during a prologue set thirty years prior – and others, like Andie MacDowell’s mother-in-law, straight up admit that they don’t want to be doing what they’re doing. However, when you start to learn exactly why they’re supposed to be hunting this poor woman in this lethal game of hide-and-seek, the more you realise that there are some serious stakes for the villains should they fail, so every single person in this film – whether they’re the hunter or the hunted – has a clear reason as to why they’re going along with all of this. For a silly survival movie such as this, it’s written fairly smartly and actually takes the time to let the audience know more about these people rather than presenting a more black-and-white picture of things.

There’s not much else to say about it, at least in review form, because it helps if you go in knowing as little about the plot, beyond what the basic set-up is, as possible. What you do need to know is that it’s devilishly entertaining stuff, and a horror-comedy that is definitely more funny than it is scary but is a good time all the same, not just due to the sick thrills but its refreshing exploration of some of the characters. It’s a fun little movie to definitely seek out.

Ready or Not is an entertaining find, filled with dry humour and fun gore while also taking the time to expand on some of its characters, which a film like this would rarely do. It’s best to go in knowing as little about the plot – beyond its basic set-up – as possible, because then you’ll enjoy its unpredictability even more.

This movie is released in UK cinemas from 27th September 2019 – be sure to check back around then for London showtimes.