Raya and the Last Dragon (Review) – Fun in Family-Friendly Westeros 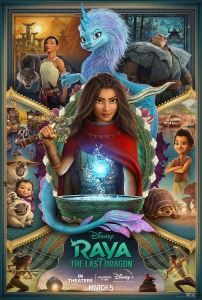 BASICALLY…: In the ancient kingdom of Kumandra, fierce warrior Raya (Tran) searches for the last of the mythical dragons to help fight off a returning evil…

Like most blockbusters thrust onto streaming or on-demand services during the pandemic, there is a great tragedy in seeing Raya and the Last Dragon for the first time on a 55-inch television instead of a cinema screen. Regardless of what you might think of the movie, its gorgeous visuals and epic scope are simply begging to be seen in a much larger auditorium surrounded by patient, attentive families, as opposed to just sitting alone in your bedroom or living room, loudly munching on your own homemade snacks while watching at mid-volume so as not to disturb any neighbours.

The cinema experience will certainly return soon (fingers crossed for May, as Boris claims), but for now we have to make due with seeing films like this via services such as Disney+ Premier Access, which come with a hefty £20/$30 one-off payment – but don’t worry, it’s worth the money.

A fun, action-packed family adventure, Raya and the Last Dragon is set in the kingdom of Kumandra, a nation shaped like a dragon which was once united, but has since separated into five factions: Fang, Tail, Spine, Talon, and Heart. Our titular heroine (voiced by Kelly Marie Tran) hails from the latter, which has been entrusted with guarding a coveted orb known as the Dragon Gem created by the last of the mythical dragons in order to protect the kingdom from the Druun, a race of evil spirits that can turn people into stone. However, when the Druun makes a return after Raya involuntarily causes the Gem to be broken into pieces, she journeys across the kingdom in search of the very last dragon, a water spirit named Sisu (Awkwafina); together, they search for the remaining pieces of the Dragon Gem and try to restore it before the Druun completely takes over.

However, as the film makes very clear early on, it’s not just the Druun that our heroes, and indeed us, should be worried about. The very people of Kumandra, blinded by centuries of greed and mistrust in one another, are capable of the most dastardly things, from betrayal to all-out chaos, just to get closer to what they want; it is, basically, a family-friendly Westeros. It’s quite a noble step for Disney to take by showing how people can be way more dangerous than any mythical being, but it also ties into the film’s grander messages about trusting others and putting aside differences to co-exist. These are themes which are vital for young children to learn, and the film stretches them way beyond just a simple “don’t talk to strangers” mantra or a basic lesson about tolerance; it manages to convey these themes through some choice action sequences and truly beautiful imagery which cleverly shows the pitfalls of blindly trusting anyone who at first appears to be harmless, rather than just telling us this over and over again (though, there are an inevitable number of exposition scenes that detail the kingdom’s rich history).

Directors Don Hall and Carlos López Estrada – the former an Oscar-winner for his work on Big Hero 6, and the latter making his animated debut following his breakout live-action hit Blindspotting – along with writers Qui Nguyen and Adele Kim (the latter best known for adapting Crazy Rich Asians) have created a lush, lived-in world with a rich and complex history, brought to life by some stellar animation which brings out each faction’s unique personality, from Tail’s desert-like wastelands to the brightly-lit city landscapes of Talon. Smaller details shown up close like Sisu’s purple-blue fur or some creative water effects look stunningly photo-realistic, while some of the virtual lighting during the film’s stylish and fast-paced fight sequences could easily rank amongst some of the more impressive live-action cinematography. Effective, too, is the voice acting; as Raya, Kelly Marie Tran embodies fierceness and nobility which makes her a compelling action hero you’d want to follow into battle, and Awkwafina as the titular last dragon easily transitions from Robin Williams-esque wisecracking to earnest supporting figure in ways that feel believable enough.

It is, all in all, a fun and fanciful action-adventure that’s easy for just about anyone to enjoy, although there are some things about it that don’t work quite as well. The script is often filled with some modern-sounding slang which does sound a little out-of-place in this ancient kingdom (and this is before Awkwafina even enters the picture), and while members of the supporting cast stand out – particularly a “con baby” who’s partnered with a trio of monkey-like creatures to grift people – not many of them are given much of a chance to flex outside of their designated one-note personalities. Some will undoubtedly also disagree with some of the choices made during parts of the film’s conclusion, particularly how it retcons some very dark moments in favour of a happier ending which, given how dark Disney has gone in the past, would honestly have been a bit of a welcome relief had it stuck to its guns a little more.

That shouldn’t take away from how gorgeous and enjoyable Raya and the Last Dragon is, for it is filled with lots of exciting action and strong messages, and is of course a huge step forward for overall representation, particularly of Southeast Asian cultures and a cast made up almost entirely of Asian actors. Alhough it’s perhaps not quite as much of an instant classic like Frozen or Zootropolis was, it’s still a great showing of strength by Disney as they continue to dazzle with effective storytelling and compelling characters.

Once again, though, I really wish this could have been shown on the big screen, for it really does have that theatrical vibe going for it which could have possibly made this an even more fun experience.

Raya and the Last Dragon is a fun and fanciful family action-adventure that’s filled with intriguing new worlds and characters which are brought to life by some dazzling animation and stellar voice work, while also working in some strong messages about trust that younger viewers, and possibly older ones, can appreciate.

Raya and the Last Dragon is now available to stream on Disney+.