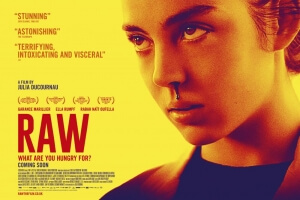 BASICALLY…: A young vegetarian student (Marillier) develops a dangerous taste for raw meat after being exposed to it during a hazing ritual…

Upon its debut on the festival circuit, first-time feature filmmaker Julia Ducournau’s Raw had numerous reports of audience members fainting or in dire need of medical services after witnessing it. Automatically, this gives the film a sense of notoriety, one that comes with its own seal of approval which also serves as a harsh warning label for the faint-hearted, and one that inexplicably makes it a film which people cannot wait to actually see, just to see how far it actually goes.

So, if you really cannot stand the sight of blood, Raw is not for you. For everyone else, it is an exhilaratingly entertaining body horror film that also packs a good chunk of intelligence to it, especially regarding its own warped vision of maturing adolescence in young women.

We first meet young Justine (an excellent Garance Marillier, in a career-making role if there ever was one) as she is preparing to start at veterinarian college, the same one attended by her older sister Alexia (Ella Rumpf, also great). During the numerous hazing rituals she and her fellow freshmen are forced to partake in, Justine is coerced into chewing on a piece of rabbit kidney – this is significant, as Justine comes from a family of strict vegetarians, and up until this point has never willingly eaten meat. Not long afterwards, she starts to develop a taste for meat, whether it be cooked or raw – and one incident involving a Brazilian bikini wax and a pair of scissors later, it’s not exclusive to just animal meat, either.

The cannibalism aspect to this film has been the subject of focus for many people, and part of the reason why those audience members fainted during its initial screenings, but that’s not entirely what this film is. Sure, it’s a major part of it, but the film is really about this young woman starting to find her place in the world, at a time when most young people start to do the exact same thing: at a higher education facility, in this case a veterinarian college. What Ducournau has managed to do here is to paint a vivid landscape that’s at once inviting but also dangerously scary; after all, when you’re living away from home for the first time and experiencing new and different things with people you barely know, you’d be pretty freaked out by everything you come across too, and in young Justine’s case it opens up a side of her that is entirely unexpected of her character up to that point. As the film goes on – and as her tastes become more diverse – she starts to become more confident in her looks, more open to parties and the excessive amounts of booze on offer, and starts to develop an appetite – ahem – for sexual lust, particularly for her gay roommate Adrian (Rabah Naït Oufella). In a strange way, Raw is not so much a movie about a cannibal, but more a film about finding your identity at a reasonably young age, although in this case that identity is that of someone who likes to eat human flesh.

However, when the movie does need to flex its darker inhibitions, Ducournau refuses to shy away from how seriously messed up a lot of it is. Early scenes of students being forced out of their rooms in the middle of the night by masked students, who then force them to crawl towards a nightly rave, already send your nerves into overdrive, not just because it looks like a scene of terrorism, but because the cinematography of waves upon waves of underwear-clad students crawling on their hands and knees is genuinely chilling, and it’s accompanied by a bombastic soundtrack that really adds to the tension and monstrousness of the situation, leaving us on the edge way before the cannibalism aspect is even introduced. Also, because the bulk of it is set in veterinarian college, there are a lot of disturbing scenes of animals being prepped for surgery or autopsy, like a horse that is hung up by its legs, or a scene where students are forced to cut open a whole bunch of dead dogs, which contribute to the uneasy feeling you always feel in every scene, especially if you’re an animal lover. As for the human flesh carnage itself, it’s pretty unnerving and well-handled, though it’s perhaps not as bloody as some people may have made it out to be, and as far as cannibalism movies go it’s no Cannibal Holocaust – but then, this was never designed in the same way as something like that. Raw is its own unique thing, and it is well-made, well-acted and well-structured enough to make you care about someone who likes to dine on people (with, I assume, some fava beans and a nice Chianti, if films have taught me anything).

In a year that’s already been fairly strong for horror films, after the likes of Split and Get Out, Raw is definitely one of the most fascinating, not least because it takes the time to establish strong character arcs and themes more than developing the actual horror itself, which this film does well but is not its defining feature. It’s a film that will stay with you long after seeing it, whether or not you follow in the tradition of those fainting audience members, and if you can handle a little bit of gore here and there, you’ll be surprised to find a nuanced, realistic, and even mature look at escalating identity in young people, particularly women.

It’s an acquired taste, sure, but luckily for those willing to give it a try, there’s plenty to chew on.

Raw is a fascinatingly realised body horror film which handles the horror elements well, including its gorier aspects, but at its core is an emotionally resonant coming-of-age story that feels natural and unforced, one that is well-acted by newcomers like Garance Marillier and Ella Rumpf, and well-made by debuting writer-director Julia Ducournau who, if she carries on at this rate, could become a new name to consider in modern horror filmmaking.