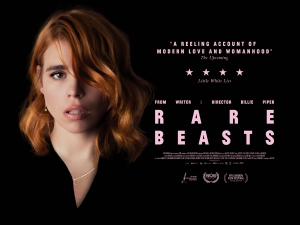 During her long career as both an actress and a singer, Billie Piper has been wed to both Chris Evans (the radio host, not the Captain America one) and Laurence Fox. Given both of their highly-publicised toxic personalities which she’s undoubtedly had to put up with over the years, it’s little wonder that, for her directorial debut Rare Beasts, Piper has opted for a narrative that completely exposes love and romance for all of its ugly nature.

Described by many as an “anti-rom-com”, that description could not be more apt for a film which is structured like your typical Richard Curtis tale of boy-meets-girl, but every single familiar aspect from the meet-cute to the bonding scenes all the way down to the cutesy kid character is given an unpleasant, mean-spirited vibe that’s almost like a Bizarro version of something like Bridget Jones’s Diary. This approach is destined to be divisive, and I’ll admit there were times during this when I felt far too uncomfortable about what I was watching, but Piper’s ambition is admirable, and though it is heavily flawed it’s not a completely bad debut feature.

Piper directs, writes, produces and stars in Rare Beasts, acting as single mother named Mandy; she’s clearly going through some psychological hurdles in her personal life, exacerbated by the divorce of her parents (Kerry Fox and David Thewlis), a toxic work environment, and her young son Larch (Toby Woolf) who, given his frequent tantrums and severe tics, is quite the handful. To top it all off, we meet her as she’s on a date with a man named Pete (Leo Bill), who very quickly reveals himself to be the worst kind of person you’d find yourself on a date with. Pete, with his permanent scowl and obnoxious self-loathing, is a serial misogynist who believes women are heavily inflicting on his conservative views on masculinity, holds deeply religious views that he wants to enforce on those who don’t want it, and is prone to frequent angry outbursts at the drop of a hat. Nonetheless, Mandy begins to engage in a “romantic” relationship with Pete, one that is made up of each party absolutely hating each other and constantly pointing out each other’s flaws and insecurities, and yet – for the time being, at least – these two extremely damaged people continue to defy expectations by sticking with each other, even when it seems that the entire universe is telling these two people not to end up together.

The film desperately wants to flip the rom-com rulebook upside down, and in many cases it does achieve some darkly funny alternatives to the standard genre clichés. The first date, as depicted in that opening scene, ends with Piper’s Mandy assuming that her date is going to rape her by the end of the night, while a later sequence showing the two “lovebirds” engaging in their first sexual encounter is hilariously awkward, but not in a cutesy way and more in a showing-the-other-person-their-anus-in-full-view way. Supporting characters, from Mandy’s warring parents to a cameoing Lily James as a bride at a wedding the main characters attend, do not offer sage love advice or even a wholesome presence; there is something off about every single person in this film, as though Piper is showing her audience a world in which romance appears to be truly dead, and everyone is left with cynical, nihilistic views which only provide fresh nails in its wooden coffin.

The director clearly knows her targets when it comes to familiar genre tropes, while also setting herself some obvious goals with what she wants to say regarding feminism in a modern society, as well as the effects of toxic masculinity on a person’s self-esteem. However, she tends to struggle with how she wants to say them; her stylised and heightened direction refuses to settle on a particular motif, flip-flopping from dry pitch-black comedy to abstract theatre in a manner of minutes, and many of the scenes in her script meander with overlapping dialogue and scenarios that it can be hard to determine the kinds of themes that she’s even trying to address here. It forms a rather chaotic mess, one that is apparently guided wholly by ambition that isn’t necessarily blind, but visually-impaired enough to not tell what kind of path it’s actively headed down. Piper has perhaps bitten off a little more than she can chew with her first directorial and screenwriting gig, and perhaps should have practised her craft beforehand on a couple of short films or some episodes of television series before tackling much more challenging and provocative material like this (she’s currently gaining some career-best reviews for her lead turn in I Hate Suzie, which she co-created, so maybe directing a handful of that series might have been beneficial).

Like its lead characters, Rare Beasts is exceptionally flawed, and needs a lot of fine-tuning to whittle down some of its outstanding insecurities if it’s to pass as something more universally acceptable. However, I cannot in good faith declare this a completely bad movie; you can definitely tell that Piper is trying so hard with this film, and that is evident in not just her performance but also her direction and writing, and while it doesn’t entirely work as a flowing narrative or even as a stylistically displeasing nightmare of a romance, respect must be paid to the effort that has evidently been put into making this film. There have been far worse passion projects made by equally talented people who were perhaps out of their depth while making them, and though Rare Beasts does not come close to being among the best it’s by no means amongst the worst either. Piper’s film will, again, prove to be far too distasteful for a lot of people, with its horde of unlikeable characters, venomous dialogue and a completely mean-spirited view of the world, but then again, it seems as though Piper’s point was to make you feel so uncomfortable as you watch this anti-rom-com play out; it just so happens that she can’t entirely seem to settle on the right point to make.

Rare Beasts is an ambitious attempt by director/writer/star Billie Piper to flip the rom-com rulebook on its head by portraying some of the most recognisable tropes in ugly and mean-spirited ways, but the debut filmmaker often struggles to settle on a particular method with which she needs to convey her numerous themes and messages.

Rare Beasts is now showing in cinemas nationwide – find a screening near you right here!