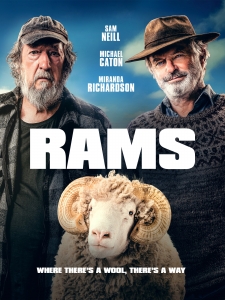 Following in the tradition of Grumpy Old Men, The Odd Couple and every single confrontation between Homer Simpson and Ned Flanders, Rams – the Australian remake of the 2015 identically-titled Icelandic film by Grímur Hákonarson – pits two warring neighbours against each other over a shared passion.

The passion in question is that of sheep farming, an innocent enough profession but one that leads to a number of confrontations in director Jeremy Sims’ likeable and light-hearted comedy, which softens the edge that the original film came with but has a decent heart to carry itself.

Set in Western Australia, Colin (Sam Neill) and Les (Michael Caton) are two brothers who live on the same farmland, yet haven’t spoken to each other in decades. Both of them are competitive sheep farmers, although they have very different approaches; Colin is by far the more sociable of the two, and thus gets on better with other farmers in the area, while Les is an anti-social, cantankerous alcoholic whose way of dealing with his estranged brother is to show up in the middle of the night and blast his window open with a shotgun. However, when an outbreak of a deadly disease forces the farmers to sacrifice their flocks, the two brothers once again opt for very different types of defiance – while Les more or less stands his ground, Colin begins breeding sheep in secret – but for the first time in years, they may just have to actually communicate with one another.

The film is neither challenging nor provocative, but that isn’t necessarily a bad thing. Rams, for all of its set-up, is really just a simple story about these two old men learning to overcome their differences and be a family once again; there just happens to be a fine herd of sheep or two that occasionally steal entire scenes (as sheep in film sometimes tend to do). Those who have seen the original, and will thus be comparing it endlessly with this version, will probably find that its slightly lighter tone contrasts a little too greatly with the original’s drier and more pitch-black humour, but what Sims’ version perhaps lacks in depth and quirkiness, it makes up for with a nicer, feel-good vibe which makes it a lot more accessible than Hákonarson’s original.

There is, bluntly, a bit more to like in this version. Sam Neill, for instance, brings a real warmness to the part in ways that only the beloved actor can, as seen in his multitude of oddball roles over the last few years, and whenever Michael Caton is on-screen, screaming and blowing holes into his estranged neighbour’s boots and front porch, it’s rather magical seeing the Aussie veteran let himself loose in increasingly unpredictable ways. As wild as some of their actions might be, neither of them resort to portraying mere caricatures; they both feel like real people, hardened by years of disgruntlement and resentment, but in very different senses they do seem to still care about each other, even if they won’t admit it in person (for a while, their only form of communication is through sending letters attached to the collar on Colin’s dog). The amiable script, by Jules Duncan, and the gentle direction by Sims allows the two lead actors enough leeway to make the viewer understand the meanings behind some of their actions, and they excel at making these two polar-opposite characters still come across as likeable even in their lowest moments.

There are parts to the film, though, which aren’t quite as subtle or human as the two leads, and we’re not talking about the sheep (which, again, steal a handful of scenes from even the ever-watchable Sam Neill). There is a romantic sub-plot between Neill and Miranda Richardson as the “pommie” new vet in town which doesn’t feel that necessary, while the main villain – a sneering Leon Ford as a rude and obnoxious bureaucrat from the Department of Agriculture – lacks credibility because he often feels like he’s come from a much hammier and more over-the-top comedy, which can be grating in ways that I suppose are intentional (after all, we are supposed to dislike him), but this character and performance was just a bit too much.

A climactic sequence set in the middle of a forest fire also unnecessarily ups the ante when the stuff with the brothers themselves was honestly enough (and also, after last year’s dramatic fires in the Australian bush, it might ruffle a few feathers for anyone who might have been caught up in it), but you’re just about with it because the leads are so likeable and the sheep they’re herding are rather adorable – gigantic testicles and all – that the fires don’t set everything ablaze.

Instead, they serve as a mere coda to a perfectly fine movie that’s okay to watch, so long as you don’t expect anything majorly substantial like the original Rams film that it was based on.

Rams is a simple and likeable film that features a couple of heartfelt lead turns by Sam Neill and Michael Caton, as well as some scene-stealing sheep, but fans of the original Icelandic film shouldn’t expect a similar tone or amount of depth in this version, which makes it more accessible but perhaps less memorable.

Rams is out now to rent or buy on digital platforms, including Amazon Prime Video.