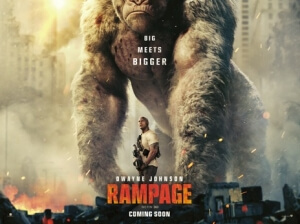 BASICALLY…: A mysterious chemical has turned a few animals into giant aggressive beasts, and it’s up to primatologist Davis (Johnson) to stop them before they destroy everything in their path…

Movies about enlarged creatures running amok are a prime theme in some of the classic B-movies, like the giant radioactive ants from Them! (a dastardly movie which fuels my genuine fear of large insects; seriously, never make me watch that movie, I will most likely have a panic attack even when I look at the DVD artwork), or any one of the original Godzilla movies.

For Rampage, a modern-era B-movie if ever there was one, they seem to have just gone with the ludicrous premise of giant monsters going about their destructive business and rolled with it, creating a movie in the process that’s certainly silly but also a mindless bit of fun.

Like most of the great giant monster B-movies, it starts out with a few capsules filled with mysterious chemicals falling from a destroyed space station, and landing in several places that are conveniently nearby some animals. One of them is an albino gorilla named George, who is cared for in the San Diego Zoo by primatologist Davis Okoye (Dwayne Johnson), and who after being exposed to the chemicals turns into a much larger and aggressive beast overnight. As George gets bigger and more destructive, Davis teams up with disgraced genetic engineer Dr. Kate Caldwell (Naomie Harris) and smooth-talking government agent Harvey Russell (Jeffrey Dean Morgan) to uncover the shady organisation behind the creation of the chemicals, and stop his primate friend from destroying everything in his path. Although, that last part may not be so easy, especially after he learns that there’s also a giant mutated wolf on the loose, not to mention an equally monstrous giant crocodile as well.

I understand that this is based on a video game, which from what I gather has gained a fan base for its tongue-in-cheek sense of humour and fun style of gameplay, which essentially comes down to destroying as much as you can while you play as these giant creatures. While it doesn’t by any means buck the trend of video game movies being anything from downright terrible (BloodRayne, Super Mario Bros, Mortal Kombat, the list goes on) to just okay (Tomb Raider… and that’s really about it), Rampage seems to have taken as much of the original game’s spirit and self-aware attitude as it can and turned that into a giant blockbuster action movie that doesn’t seem to take itself too seriously, which is part of what makes it a bit of dumb fun. The most enjoyable B-movies almost never treat themselves as though they’re actually saying something of value; they’re just there to deliver on a zany premise that was promised to the audience and they do so with as much entertainment pumped into their veins as is humanly possible, which is exactly what Rampage does and shouldn’t necessarily be knocked down a peg for being exactly the kind of dumb monster movie it set out to be.

Sure, it falls back on clichés in its over-the-top script with even larger-than-life characters, but even in moments when the film is trying to be overly serious you can kind of tell that there is a knowing attitude in the actors’ eyes, like they’re fully aware of what kind of movie they’re in and are delivering exactly the kind of performance audiences would expect, whether it be stern and heroic in Dwayne Johnson’s case, or comically bumbling like several background characters like Jake Lacy’s sidekick to Malin Åkerman’s villain. Never is there a point where you sense that anyone is treating this plot with any kind of legitimate seriousness, which for a much smarter movie would be lethal, but luckily this is a dumb-as-bricks B-movie that’s more concerned with giving the audience a good time without necessarily getting them to think that much. If you go into this kind of movie expecting legitimate smarts, I don’t know what to tell you; this is pure popcorn entertainment designed for pure escapists who want to turn their brains off for a little under two hours, and this contains enough action, light-hearted humour and stupid dialogue to successfully satisfy anyone just wanting a good old-fashioned fun time at the movies.

Does that mean it’s a good movie? Of course not; like I said, it’s a very stupid movie that just happens to know it’s pretty stupid. There’s plenty of things to mock about it, from the effects which can range from being pretty decent to just plain cartoonish at times, to the main plot of the movie which of course makes little to no sense when you start to think about it, to the rather heavy amounts of destruction porn in its last third, where innocent people are clearly just mercilessly killed left and right by these giant creatures, yet their deaths are never really acknowledged in a similar fashion to how no-one really points out the tens of thousands who perished in the climax to Man of Steel. But even though this is clearly not designed for anyone of intelligence who cannot seem to switch their brains off at any given moment, it’s way more coherent and digestible than some other big bloated blockbuster examples, like Man of Steel or any of the Transformers movies, and the inclusion of Dwayne Johnson, an actor who is pretty much self-aware in almost everything he’s in, helps give it a bit more of a enjoyment factor than any of those movies combined.

Rampage is certainly a big, dumb monster B-movie with little to no intelligence to it whatsoever, but part of its charm is how it is aware of how silly it is and just goes along with it to make something that’s certainly stupid but also mindlessly entertaining at the same time.