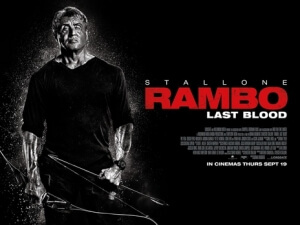 BASICALLY…: War veteran John Rambo (Stallone) must use his lethal combat skills to rescue a close relation from a sadistic Mexican cartel…

Sylvester Stallone is an actor best known for the two “R”s of his career: Rocky and Rambo. In terms of personality and background, both are continents apart from each other (literally in some cases) but like Stallone himself they have grown considerably over time, and matured into reflective, meditative figures who look fondly on their pasts and express optimism about the future.

Or, at least, Rocky Balboa has. In the case of John Rambo, the Vietnam veteran turned vigilante has more or less stayed exactly the same, exacting vengeance in the most brutal of manners on those who deserve it in each one of his adventures, and his fifth outing Rambo: Last Blood is just more of the same, only not as consistently fun as some of the others.

We meet up with Stallone’s Rambo as he’s living a quiet life on a ranch, with his niece Gabrielle (Yvette Monreal) who’s about to start college. When Gabrielle is summoned to Mexico to reunite with her estranged father, she is subsequently captured by a local cartel and forced into sex slavery, prompting Rambo to head across the border and get her back before the unthinkable happens. He goes up against violent cartel brothers Victor and Hugo (Óscar Jaenada and Sergio Peris-Mencheta), who quickly learn the cost of crossing someone with as fierce combat experience as John Rambo.

They quickly learn it because the movie is a quick sit, running barely under ninety minutes, which means there’s little room for what made some of the previous Rambo movies – particularly the well-received debut entry First Blood – work, such as the complexity of the character and reflections on the violent past that he once endured. Here, he’s reduced to a leaner, much rougher version of Liam Neeson’s character from the first Taken movie, which has the potential to work because Stallone is a physically intimidating presence here, but the writing relies too heavily on clichés and xenophobic stereotypes to make you care about any of it. The Mexican cartel here is filled with every Mexican cartel stereotype you can think of, and portrayed just as cartoonishly over-the-top as you’d expect, with even the more reliable ones such as Adrianna Barraza as a friend relative connection not announced of Rambo’s who also lives on the ranch having very little character to work with, and in the case of Paz Vega, her character is set up to be someone important but completely disappears by the time the big climax comes into play. It feels like a big, violent, machismo action film that would have gone over better in the 80s instead of in today’s more sensitive climate, and it’s not even a very good one; director Adrian Grunberg shoots most of the action in the dark or with aggressive shaky-cam which makes it difficult to make out what is happening half the time, and the writing isn’t strong enough to support the shockingly gory moments of violence (seriously, there’s more gore in this film than the last Saw film that came out a couple of years ago).

The movie only finds its fun action movie footing in the climax, which is this wildly violent mix of Home Alone, the third act of Skyfall and your average Saw film, and it’s so over-the-top in its kills and designs that the movie is almost worth recommending just for this insane section alone. This is the kind of action movie climax where people are shot in the head, blown up, set on fire, fall onto spikes, hit with bullets that have been laced with magnesium, and even get their legs cut clean off; it is blood-soaked carnage and it’s kind of enthralling, albeit in that sadistic sense where, like Rambo, you want these guys to get everything that’s coming to them in and any method available will do, no matter how gory. If the whole movie had that kind of over-the-top tone throughout instead of just saving it until its big finish, then maybe the movie would be more fun than it is, but aside from one scene where Rambo re-enacts the climax to Taxi Driver near the end of the second act, the film is sluggish, unpleasant, and rather dull, filling out most of its running time with cliched dialogue and thin stock characters who you either don’t care about or don’t know an awful lot about.

This movie is what Rocky V was to the Rocky series, which like this one (which is billed as being the final movie in this particular series) was a movie that was intended to wrap up the character’s story with a smaller, more personal chapter than the ones before, but proved to be so underwhelming that not even Stallone cared much for it in perspective (although personally, and I’m aware this is an unpopular opinion, I actually rather liked that movie, but not as a finale to that saga). It’s both too early and too hard to say whether Stallone has similar feelings about this film, because at times it seems like he’s sleepwalking through scenes and other times he’s giving it his all, but at least after Rocky V he went back and revisited the character further down the line in the 2006 sequel Rocky Balboa; something tells me that this isn’t the last we’ve seen of John Rambo, if history is willing to repeat itself, but let’s hope that whenever he does decide to dig up the character one more time – if at all – he makes it a more consistently satisfying movie than Rambo: Last Blood, which just doesn’t hit the bullseye as well as this series used to do.

Or, better yet, maybe it’s time for this character to finally be at peace and take a good, long nap after everything he’s been through.

Rambo: Last Blood is a sluggish, unpleasant and mostly dull action sequel that doesn’t find its footing until the gory and over-the-top climax, but even by then there’s very little reason to care about any of it.

Want to decide what the movie’s like for yourself?
Check out Rambo: Last Blood showtimes in London
via