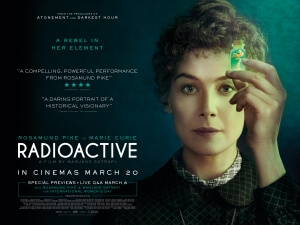 No individual is perhaps more important to shaping the modern era than Marie Skłodowska Curie; the Polish scientist rocked the scientific world in the late 19th century, when she discovered two new elements – polonium and radium – and developed the theory behind radioactivity (a phrase coined from her), which would go on to inspire great medical breakthroughs but also produce deadly results in the creation of the atomic bomb.

Her work continues to be heralded to this day, and in the new biopic film Radioactive her achievements are on full display in a stylish approach that has some truly profound moments, but can’t help but feel trapped within the limitations of standard biopic tropes.

The film focuses primarily on Marie Curie (Rosamund Pike) as she, throughout her life, fights to make her achievements a reality, in a time when nobody would take her seriously because of her gender. It’s not until she forms an alliance with fellow scientist Pierre Curie (Sam Riley) – who would later become her husband – when she finally begins to receive the funding and material she needs to do her ground-breaking research, and soon enough both she and Pierre become household names for their discovery of radioactivity.

It covers practically every major event in Marie Curie’s life, from her Nobel Prize wins to her development of mobile radiography units during the First World War, to even certain tragedies that she would experience much later on, all leading up to her eventual death in 1934. That’s a lot to cover in a reasonably short amount of time, and while the movie makes a noble effort to go through as much as it can when it comes to this person’s life, it can’t help but feel somewhat cluttered. Scenes will go by fast so that it can get to the next big moment in her life, with barely a pause to let the importance of said moment sink in, so it comes across as less of an authentic celebration and more of a checklist ticking off every moment that’s worth portraying. Because of that, this movie falls into a category of biopics that perhaps contain too much material for a feature film, and might have instead benefited from being a miniseries so that each one of these major events could be fleshed out a little more than they are in a stricter running time. At the very least, the script could have been significantly tidied up to leave more room for audiences to emotionally connect with the character, instead of constantly going through the motions with barely a moment to breathe.

While the script perhaps doesn’t have the same experimental mind as Marie Curie herself had, it’s left to director Marjane Satrapi to carry on that spirit, as she herself experiments with a style of filmmaking that doesn’t always land on its feet, but is nothing if not intriguing. The Iranian filmmaker, who has a rather variable filmography from animated graphic novel adaptation Persepolis to the pitch-black Ryan Reynolds comedy The Voices, gives the film a unique visual language that highlights the confidence and stoic nature of its lead character, something that is further amplified by Anthony Dod Mantle’s cinematography which combines colourful specks – the green hue of the radioactive material she discovers illuminates several scenes – with drab depictions of the Parisian environment she operates in, as though to show she is a shining light in a colourless and unimaginative world of science. Along with a fierce and committed lead performance by Rosamund Pike, Satrapi’s direction stands out enough to feel a little more stylish than the contemporary-looking biopic.

However, though the style suggests otherwise, the substance keeps on insisting that it is strictly playing by the conventional rules of a biopic. It’s a similar trap that Bohemian Rhapsody previously fell into, where it’s so focused on delivering a by-the-numbers retelling of major events in this historical figure’s life that it doesn’t leave a lot of room to really stand out from the crowd, which in a way undermines the figure’s lifelong mission to indeed stand out from their contemporaries. There are moments where it does venture outside of the box, such as random flash-forwards to future events like the bombing of Hiroshima and the nuclear meltdown at Chernobyl which all, of course, tie in to the very thing that Marie Curie became most famous for, but those moments are far and few in between and don’t feel quite so earned, because everything else leading up to them has been much more straightforward without even the faintest of hints that it’s about to take this particular direction.

While the movie certainly has problems, largely in the script department, it still manages to achieve what it sets out to do, and that is to highlight the momentous and important discoveries made by this person. Marie Curie’s research ended up changing the world, for better or worse, and Radioactive does manage to leave you fascinated by all of her achievements – if only the movie itself was as innovative as she was, then it really could have been a worthy discovery.

Radioactive is a stylish attempt to tell the life story of famed scientist Marie Curie, with director Marjane Satrapi experimenting with a unique approach that visually sets itself apart, but a conventional biopic script that feels way too cluttered with far too much material for a feature film unfortunately bogs it down significantly, despite the noble efforts of Satrapi and lead actress Rosamund Pike to make it feel stronger than it really is.

Want to decide what the movie’s like for yourself?
Check out Radioactive showtimes in London
via