We wish we could bring you happier news right now, but 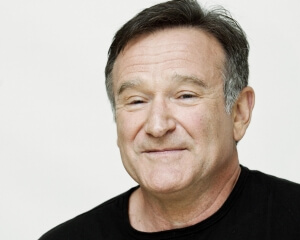 unfortunately we are devastated to share with you the news that Robin Williams, the great comic and acting titan, has been found dead at the age of 63.

The actor was found unconscious in his California home, having appeared to have taken his own life via asphyxia (though the official police statement addresses this to be unconfirmed until forensics and toxicology reports have been conducted). Williams had been known to have been battling depression and addiction for most of his life, including a brief relapse back into alcoholism in 2003 and a cocaine habit during the late 70s and early 80s, as well as a case of bipolar disorder.

Having begun a love for comedy from an early-age in attempts to entertain his mother, the Chicago-born actor’s big break came in a 1978 episode of TV show Happy Days as alien Mork, which proved to be so popular that Williams headlined his own spin-off show Mork and Mindy which ran for four years. After that, Williams began starring in films such as Popeye and Club Paradise to mixed success, but his Academy Award-nominated turn in Good Morning Vietnam eventually proved him as a force to be reckoned with. He would go on to be nominated for three further Oscars for Dead Poets Society, The Fisher King, and Good Will Hunting (winning for the latter).

Other dramatic roles throughout his career included Awakenings, The Birdcage, Patch Adams, Christopher Nolan’s Insomnia, One Hour Photo and, more recently, a small role as Dwight D. Eisenhower in Lee Daniels’ The Butler.

But more often than not, Williams is perhaps best remembered by audiences for his many comedic and family-orientated roles – honestly, where do we even begin with them? From Mrs Doubtfire to Hook to Flubber to Happy Feet to Jumanji to the Night at the Museum films he had great success, but perhaps most notably to younger fans he was the legendary voice of the Genie in Disney’s Aladdin.

As for forthcoming releases that Williams made before his passing, he will feature in the third instalment of the Night at the Museum franchise, subtitled Secret of the Tomb (out this Christmas), independent film Boulevard, holiday comedy Merry Friggin’ Christmas, and as a voice role in Absolutely Anything, with Simon Pegg and Monty Python members Terry Jones, Terry Gilliam, Michael Palin and John Cleese.

The entertainment industry has been quick with their tributes to Williams, with celebrities such as Steve Martin writing on his Twitter account “I could not be more stunned by the loss of Robin Williams, mensch, great talent, acting partner, genuine soul” and Night at the Museum co-star Ben Stiller stating that “I met him when I was 13 and a huge fan and he was so kind and I watched him be kind to every fan i ever saw him with… And with other actors he was so generous and brilliant. He made everyone feel special and equal around him even though he was the genius… His heart was so big and even if you didn’t know him, what he gave everyone was that same spirit in his work, so we all felt it… His impact on the world was so positive. He did so much good for people. He made me and so many people laugh so hard for a very long time.”

Tributes even extended to the White House, with President Barack Obama releasing his own statement: “Robin Williams was an airman, a doctor, a genie, a nanny, a president, a professor, a bangarang Peter Pan, and everything in between. But he was one of a kind. He arrived in our lives as an alien – but he ended up touching every element of the human spirit. He made us laugh. He made us cry. He gave his immeasurable talent freely and generously to those who needed it most – from our troops stationed abroad to the marginalized on our own streets. The Obama family offers our condolences to Robin’s family, his friends, and everyone who found their voice and their verse thanks to Robin Williams.”

He is survived by his wife, Susan Schneider, and three children. Film Feeder offers their severe condolences to his family and friends at this difficult time, and wishes them nothing but love and support.

From his extensive film career, stand-up and humanitarian work, Robin Williams succeeded in making the whole world laugh and cry (often at the same time) with a gift and passion that will never go away despite today’s tragic news. Whether he was a Genie or Peter Pan or an elderly Scottish widow, you cannot deny that at some point he put a smile on your face. And if he did, then consider his work and life more meaningful than he probably thought.