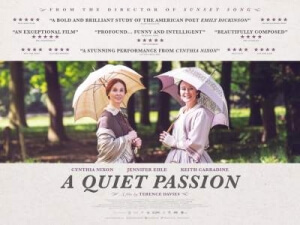 If there ever was a cure for insomnia, Terence Davies’ latest film – a biopic on American poet Emily Dickinson – is it.

Before this film, I didn’t know a whole lot about Dickinson, her life or her many collections of poetry, and I can safely say that, now having seen A Quiet Passion, I STILL don’t know anything about who she was, what she did, or why any of it was of any significance. The ultimate failing of any biopic, at least in my eyes, is that you come away from one knowing just as little about its central figure as you did before going in, and Davies’ film not only provides non-experts on Dickinson’s legacy almost no crucial information about her life whatsoever, but it has the audacity to be a dull, snail-paced bore of a movie on top of everything.

It is a straightforward look at the life of Dickinson, played for the majority of the film by Cynthia Nixon (and in earlier segments by Emma Bell), who grows up in her family household, writes some poetry every now and then – with voiceover by Nixon handily reading it out for us – and then lets nature take its course. That may sound like I’m spoiling things, but that is really the entire plot of this movie in a nutshell, because aside from some other uneventful episodes that are sprinkled throughout, nothing actually happens in this two-hour film, so you can imagine the boredom I had to endure while watching it.

To make things more frustrating, not once over the course of those two hours does the film really take time to address what makes Dickinson such a revered figure in the literary world. It never tells us why this woman, who is written to be such a cold and unemotional blank slate of a person throughout most of it, deserves all the praise and attention she got once her work was made public, and because her character in this movie is written this way, we cannot for a second find ourselves rooting for her or even interested in what she is going through. She is seriously the least interesting character in her own biopic, and when you’re in a situation where some of the side characters, like Catherine Bailey as a friend of Dickinson’s whose lively presence is sorely missed when she’s gone, are more compelling and worthy of screen time than the person you’re meant to be focusing on, especially in a biopic, you’ve seriously messed up in your representation of that person.

I honestly feel bad for Cynthia Nixon, because from what I gather she and Davies had been wanting to do a film about Emily Dickinson for a few years now, with the project first being mentioned back in 2012 and then actually filming it a few years later. But sadly, her casting as Dickinson is one of the film’s biggest problems for me; I hate to be mean about someone I’m sure is a nice person in real life, but Nixon in this movie plays her as a Botox-injected spinster, and every time she appears earlier in the film, where I’m guessing she’s playing her at a slightly younger age (for reference: Nixon is 50 as of this review), she looks about the same age as the actor playing her father. It’s seriously distracting, to a point where it was taking me out of the film, and not helping matters is that her performance feels very one-note and oddly robotic, especially in moments where she’s trying to display some emotion like smiling or laughing, but it’s like one of the hosts from Westworld trying to blend in with the humans. Again, I feel bad knowing that Nixon had wanted to play this part for a good few years now, but she really doesn’t fit the part here; just cast Sarah Paulson as Emily Dickinson and get it over with.

There’s almost nothing to recommend about this movie; it’s shot boringly, it’s acted boringly, it’s written without any strong reason as to why this person is worth making a movie out of in the first place, and it should only be watched if you’re struggling to sleep, and nothing else seems to be working. Maybe I’m just not that knowledgeable about Emily Dickinson to really understand what’s happening here, but that’s part of the problem; whether you know about a person or not, a biographic film is meant to at the very least offer a jumping-off point for you to learn more about them in your own time, but this film doesn’t even have a surface to jump off of, and it’s paced and written so dull that it kills any interest you might have had about Emily Dickinson before watching this movie. It is made only for people who already have quite a knowledge for her and her works, and good for those people who end up seeing this movie and really liking it, but not everyone knows who Emily Dickinson even is, and those who don’t will probably end up being as lost and as bored as I was during most of it.

As far as bad biopics go, it’s not one of the worst-made ones; you can tell that the production and costume design is on point here, and the attention to detail with its period setting is fairly strong, unlike something far more incompetent than, say, Diana was. But at least Diana was so bad that it left an impact; A Quiet Passion is so dull and forgettable that it will slip from my mind within days, if not hours, of seeing it. If you’re really curious about the life and works of Emily Dickinson, go to the library and find out whatever you can, or even visit her Wikipedia page; it’s not worth it to check this film out whatsoever.

A Quiet Passion is a dull, weary and exceptionally boring attempt to depict the life and works of Emily Dickinson, but fails to express what it is about her and her writing that makes her stand out, with Cynthia Nixon utterly miscast in the main role and not adding anything of value to someone who is already beloved by many literary scholars.