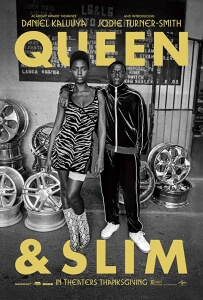 BASICALLY…: A date between two young black people (Kaluuya and Turner-Smith) takes a turn for the worst when they are pulled over by a white police officer…

By the time Bonnie and Clyde were gunned down in 1934, they had already won the hearts of a disillusioned Depression-era public, who labelled them folk heroes for doing what nobody else had the guts to do, despite their very illegal means of doing it.

Oddly enough, the world could use people like Bonnie and Clyde nowadays. Public outrage over social, political and legal injustice is greater than it ever has been, with so many innocent and often unarmed people of colour being arrested or sometimes even killed by white cops who shoot first and ask questions later, yet this blatant display of institutionalised racism is ignored by those in power, who do next to nothing to ensure this doesn’t happen again. People need inspiration to finally make a stand against these injustices, though of course violence is not the preferred option, but any kind of hope in an increasingly unjust world would be all it takes to finally light that match.

Writer Lena Waithe and director Melina Matsoukas – a music video director making her feature debut – imagine what it would be like if that hope sprung from the most unexpected of circumstances in Queen & Slim, a powerful drama which takes the overall story of Bonnie and Clyde, and updates it with timely themes about race, injustice, and making a stand in a cruel, bleak world.

The film starts in the middle of a date between two black people, “Queen” (Jodie Turner-Smith) and “Slim” (Daniel Kaluuya) – though neither are referred to as such during the film – which is going about as well as any date you’d probably set up through Tinder. They could not be less of a match for each other; she’s a criminal defence lawyer who knows the ins and outs of the legal system like the back of her hand, while he mainly just bums around and does his own thing. As if their date couldn’t get any more awkward, they are pulled over on the drive home by a white police officer, whose overzealous attitude soon forces Slim to shoot the cop dead in self-defence. Queen, knowing full well that they will be locked up for the rest of their lives for killing a police officer, immediately convinces Slim that they need to go on the run, and so the two of them must now lay as low as they can if they are to escape their fate. Meanwhile, the shooting goes viral when it is caught on camera, and much like Bonnie and Clyde they start to become revered outlaws amongst their oppressed kin.

There is almost this sense of powerful modern-day satire in the film’s set-up, a little like how Jordan Peele took the idea of interracial relationships and morphed it into a horror film with Get Out (also starring Kaluuya, funnily enough), with the main driving force here being “what would Bonnie and Clyde be like if they were around today, and were also black?”. There isn’t much to laugh about here, though, since everything is played incredibly straight, as it should be; topics such as racial profiling, police brutality, poverty and legal injustice run rampant in this film, either in the forefront or the background, and Waithe is a smart enough writer to know when to hold back on certain tones so that powerful moments such as these can naturally unfold. The world which she depicts in her story is bleak and even dystopian, where there is clearly anger brewing from underneath the surface which the inciting incident only exacerbates, but also inspires a sense of hope for communities who see the main characters as icons that symbolise the way forward in fighting against injustice. In that sense, as intense as the story is, it is also quite a hopeful film which makes it a far cry from many other movies that tackle similar themes to this, which deal too much with the reality and not what could be if there was any possibility.

It is also a riveting feast for the eyes, with cinematographer Tat Radcliffe offering some crisp, dimly lit shots that make everything from night-time driving to gas stations in the daylight seem intimidating. You can tell that director Matsoukas had previously worked on music videos, because the way in which the visuals are presented seem like they would go perfect with music attached to it, hinting at visual lyricism that most first-time feature filmmakers struggle to hone down. Then, of course, there’s Queen and Slim themselves; Daniel Kaluuya, so great in Get Out, gets another chance to shine as someone who’s utterly overwhelmed by everything that he’s found himself wound up in, while Jodie Turner-Smith turns in a star-making performance as a woman whose knowledge of the way things work for people like herself and her on-screen partner is both a blessing and a curse. Also watch out for a scene-stealing Bokeem Woodbine as Queen’s estranged pimp uncle Earl, and his rather eclectic wardrobe.

At 132 minutes, the film is perhaps longer than it ever needed to be. You can feel which scenes could and probably should have been cut to get it down to at least under two hours, and it even reaches a point where you think it’s about to finally wrap up, but then it keeps going for another twenty minutes. Despite that, it’s a solidly told story that wears its heavy themes on its shoulders, and is a clever re-telling of a famous pair of legends that takes what made Bonnie and Clyde so infamous and updates it for our more troubling times.

Queen & Slim is a powerfully told modern take on the legend of Bonnie and Clyde, which writer Lena Waithe and director Mena Matsoukas tell with complex and deep themes of injustice, not to mention some gorgeously bleak cinematography and two extremely worth lead performances by Daniel Kaluuya and Jodie Turner-Smith.

Want to decide what the movie’s like for yourself?
Check out Queen & Slim showtimes in London
via