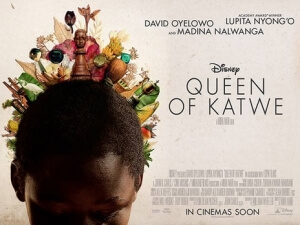 BASICALLY…: In Uganda, a young woman named Phiona Mutesi (Nalwanga) develops her skills as a chess prodigy and soon wows the world at the World Chess Olympiads…

Despite their recent resurgence into the world of film with hits like Frozen and Zootropolis, not to mention its many Pixar, Marvel and Lucasfilm projects setting the company up even further for world domination, Disney is still seen by many to be far too safe and the kind of studio that doesn’t take many risks.

To those people, I would tell them to watch Queen of Katwe, an unorthodoxly mature and poignant exploration of taboo issues (for Disney, anyway) of severe poverty among others, whilst retaining that type of fairy-tale storytelling about wishes that can, as long as they work hard enough, come true.

Set in the Katwe slum of Uganda, an African teenager named Phiona (newcomer Madina Nalwanga) lives a simple life with her siblings and her strong-willed mother Nakku (Lupita Nyong’o). One day, she stumbles across a missionary program where football coach Robert Katende (David Oyelowo) teaches a small class of children the game of chess, and soon becomes fascinated by it enough to start playing. Over a short amount of time, Phiona starts to become quite the champion, and soon she finds herself travelling across the country and other parts of the world to compete in national competitions, gaining worldwide attention for her intelligence and precision when moving the pieces.

As far as the narrative is concerned, it’s nothing that original. It is a standard sports film about an underprivileged individual who goes on to fame and fortune through their incomparable talents, but it’s made so well and written to be so emotionally powerful, not to mention acted beautifully, that honestly you don’t care that you’ve seen this kind of film before. Mira Nair, the Indian-born filmmaker best known for mostly Hindi films like Monsoon Wedding and Salaam Bombay!, has painted a vibrant portrait of the Ugandan slum of Katwe, one that mixes a bombastic soundtrack with images of people walking through the muddy exteriors of dilapidated homes and selling various items from vegetables to souvenirs in the street. However, it is important to point out that none of this is designed to make it seem less harsh and potentially dangerous than it is, and what the film is so powerful at representing, especially for a film released by Disney – in fact, I’m genuinely amazed that this got a PG rating here in the UK – is just how real the harshness of everyday life in this poverty-stricken area of the country feels. As you see characters be forced out of their homes, left to wander the streets at night, and forced to take shelter in an abandoned church that doesn’t even have a roof, you appreciate how much Nair and writer William Wheeler have avoided making the environment much more pleasant for the sake of a family audience from a family-friendly studio, and in doing so showing a vibrant vision of Uganda that is true to life as well as accessible for anyone to watch.

Even so, that doesn’t stop Nair from making everything look absolutely gorgeous to look at, from Sean Bobbitt’s colourful cinematography to the splendid energy displayed by its mostly young cast. Professional actors like Oyelowo and Nyong’o are simply wonderful here, but its young lead Nalwanga ends up being the one who carries the film on her robust shoulders, as she gives us a simple but sympathetic character to root for and adore from her streetwise attitude and fierce determination, a trait she undoubtedly picks up from her on-screen mother Nyong’o. Nalwanga and the several young children who make up the rest of Oyelowo’s chess team end up nearly stealing the entire film with their natural charisma and ability to seem like real children instead of the usual cookie-cutter cute kids you usually get in Disney productions.

Chess, too, gets a starring role which, for someone like me who used to play it at school, is fun to watch be played by people who do this on a more professional basis, and Nair et al deserve credit for making something like chess seem positively exciting on the big screen. However, like most sports movies (then again, is chess really a sport?), the game is not the main star; Queen of Katwe is far more about the personal and external struggles this young, likable girl is going through with her complicated life in a rough corner of the African continent, and for a studio like Disney to release something like this as part of their official line-up is just as inspiring as the true story it was based on.

Queen of Katwe is a remarkably mature sports movie which, despite following the usual conventions of a sports film, receives points for not compromising a poverty-stricken vision of the Ugandan slums for the sake of a family audience, as well as being directed and acted wonderfully by everyone involved.