PVT Chat (Review) – Not The Most Titillating Experience 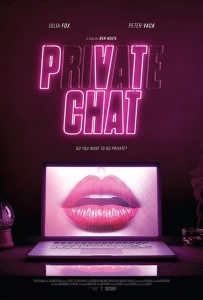 BASICALLY…: Internet gambler Jack (Vack) becomes obsessed with cam girl Scarlet after he seems to spot her on the streets of New York…

More than ever this year, people are going to be spending Valentine’s Day on their own, but a lack of sensual intimacy or the desperation to connect with someone, anyone, isn’t something that a computer, a strong wi-fi connection, and a box of tissues can’t solve. PVT Chat dives right into this kind of world, where loneliness and physical sexual dissatisfaction leads to obsessive, even dangerous, fixation on the hard-working cam girls of the Internet – or so it does in filmmaker Ben Hozie’s calculating and reasonably enticing film, which like the very kind of kinks that it portrays, fails to end with a satisfying climax.

The film is primarily about Jack (Peter Vack), a New York lowlife whose “career” lies in online gambling, though he spends nearly all his spare time engaging in cyber sex with cam girls. The model he is most fixated with, though, is Scarlet (Julia Fox), a dominatrix who specialises in humiliation; like a good “slave”, Jack gets naked for her, lets her use his tongue to put out her cigarettes, and on her command stops masturbating when he’s about to come. Needless to say, Jack is smitten with her – in his own deranged, obsessive way – so when he thinks that he sees her casually walking around New York, even though she claims to be in San Francisco, he becomes more and more determined to get closer to her. However, before you start thinking that this entire film is merely a Joker-like portrayal of a mentally-ill loner with serious addiction and obsession issues, thankfully we also see events from the perspective of Scarlet herself, and as we learn a little more about her real-life existence – which, like that of her biggest admirer, is one filled with misery and loneliness – the more we see just how these two rather damaged people are on a collision course that may or may not end in tears.

Unfortunately, for most of the film we are stuck with Jack, who unlike Fox’s Scarlet turns out to be a lot less appealing the more we get to know him, and sadly he’s also our lead. This isn’t someone who’s certainly got some issues but ultimately means well; rather, he’s an obnoxious, socially-depraved and dangerously unstable loser whose addiction to online gambling and obsession with his cam crush leads to him making some incredibly stupid decisions that nobody in their right mind would make. He’s rude to people who are genuinely trying to help him, he hangs out with even more repellent douchebags that fuel his gambling habit, and – during one pivotal scene in the film – casually wanders into someone’s apartment and snoops around, hiding underneath their couch when the owners unexpectedly return. Peter Vack’s performance is fine, but this is a character that I wasn’t really comfortable spending an overwhelming majority of the movie with, because beyond his repugnant tendencies he’s really not that interesting of a character, nor does it have anything fresh to add to any related conversations. Say what you will about Joker, but at least that movie had more of an idea about what it was trying to get across with its anti-hero protagonist; in PVT Chat, any attempts to replicate that kind of success are met with flailing disappointment.

Ben Hozie’s film is also one where there are only the barest of bones that form a cohesive story, and ends in a way that appears to wrap up certain character arcs but still leave many unanswered questions. It doesn’t feel like a satisfying enough ending to a film that felt like it was just getting started, which kind of makes this film a bit of a let-down when you start to think of all the directions it could have gone instead. There’s some decent things about PVT Chat, in particular what it has to say about the lifestyles of online performers and, of course, Julia Fox’s always-alluring magnetism, but other than that it’s a bit of an empty and forgettable watch.

Regardless, there’s a good few shots where those who are alone on Valentine’s Day can easily be satisfied with, if you catch our filthy drift.

PVT Chat doesn’t take many risks or major leaps when it comes to depicting the lifestyles of online sex workers, despite an alluring turn by Uncut Gems’ Julia Fox, and instead wastes itself on an unappealing protagonist and a less-than-satisfactory plot and climax.

PVT Chat is out now to rent or buy on digital platforms, including Amazon Prime Video.