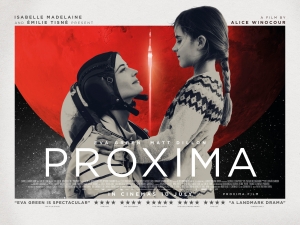 BASICALLY…: As an astronaut (Green) prepares for a year-long mission in space, she finds her relationship with her young daughter (Boulant-Lemesle) tested…

Eva Green has been reaching for the stars ever since her big break in Casino Royale; the French actress has since gone on to star in numerous acclaimed independent projects like Cracks and The Salvation, and has often been the best part of otherwise mediocre big-budget Hollywood flicks from 300: Rise of an Empire to Dumbo.

I suppose it was only a matter of time, then, that Green would attempt to literally reach the stars in one of her movies, and in her latest starring vehicle Proxima she manages to do just that – but the latest film from director and co-writer Alice Winocour is not just another sci-fi movie about the wonders and tribulations of space travel, but a much more grounded and sincere film about the frustrations and misgivings of simply getting in the proper mental state for it. It’s a space movie where we never even get to go up into space, but watching Green give one of her best performances as someone coping with the enormous weight of her profession is enough to make you feel like you’re in zero gravity.

Green is Sarah, a French astronaut who has been selected at the last minute to accompany a group of international space pilots on a year-long mission aboard the International Space Station, which is meant to be the last such trip before heading further out to Mars. She is also a single parent to her young daughter Stella (played by remarkable young actress Zélie Boulant-Lemesle), who herself is struggling to cope with the fact that her mother is going away for such a long time, and when Sarah places her in the care of her former partner Thomas (Lars Eidinger) so she can head to Russia for some vigorous training exercises, the relationship between mother and daughter begins to fall apart.

Winocour, whose previous film Disorder kind of fell apart by the end, is on a much more focused and self-assured path with this film, which does a fine job of putting you in the heat of the main character’s personal frustrations, whether it’s personal with her daughter or her amicable relationship with her former partner, or on the job as she, quite alarmingly, experiences a high number of challenges owning to her gender. Matt Dillon plays a brash American astronaut who at first remarks how having a French woman on board the shuttle will lead to better meals being made, and he doesn’t really get much better from there; he tries to get her to accept less responsibilities when on the ISS due to her apparently not being able to handle the stress, and gives her a warmer-than-preferred hug at one point. The hints of misogyny extend to other male employees at this training ground, from a doctor who asks her intrusive questions about menstruation, to a drill sergeant who dismisses her for being slightly late to an exercise. Like most of the film, it’s treated as very matter-of-fact and blatant, but while it is a problem for her she does her best to not let the casual sexism get her down, which is a testament to Winocour’s strengths as both a writer and director that she can address the issues surrounding women in this line of work – hell, any line of work – but not let the lead character be defined by any of it.

If anything, Sarah is much more concerned about the well-being of her young daughter, which serves as the emotional highlight of the film. So many films about astronauts deal with them leaving young children behind, whether it’s Interstellar or First Man, but Proxima sets itself apart by not only dealing exclusively with a mother-daughter relationship (which is rare for a type of film that predominantly features a father-son or father-daughter one), but by having it exist as far more of a narrative drive than even the plot about going into space. Winocour allows you to feel the strain between Sarah and young Stella as the weeks and months go by with little contact, and how Stella’s own problems from being dyslexic to not understanding maths feed into her own feelings of abandonment by her own mother for an extended period of time. It’s wonderfully portrayed by Winocour, and especially by the two heart-wrenching performances given by both Eva Green and Zélie Boulant-Lemesle; Green is on top form here, unafraid to let her guard down and give a turn that’s both raw and extraordinarily real; likewise, Boulant-Lemesle is a very natural young actress who has some very believable moments of emotion, and is a genuinely sweet and likeable presence.

The movie eschews the visual effects-heavy space drama that movies like Interstellar, First Man and Ad Astra managed to work with in favour of something that feels a lot more authentic and (for lack of a better term) down-to-earth, focusing far more on the emotional implications of heading up into space for a large amount of time than most of those other films would have probably dedicated time towards. A character tells Sarah that the hardest part of space travel isn’t preparing to go up, it’s preparing to come back, which the film all but hints at being the core moment of drama; if things are so difficult right now, then there’s no knowing what it’ll be like a year in the future, so it’s best to simply embrace the now, because it’s all we really have. Again, the film never actually ventures into space, but it leaves you on such an emotional high that makes you feel weightless.

Proxima is an emotional and very well laid-out space-themed drama where the crux of the narrative revolves around Eva Green’s astronaut struggling to keep her personal and professional life afloat, which director and co-writer Alice Winocour puts great emphasis on above effects-heavy sequences (of which there are next to none), as well as two stunning performances from an excellent Green to remarkable young actress Zélie Boulant-Lemesle as her daughter.

Want to decide what the movie’s like for yourself?
Check out Proxima showtimes in London
via