Promising Young Woman (Review) – Delivers On All Its Promises 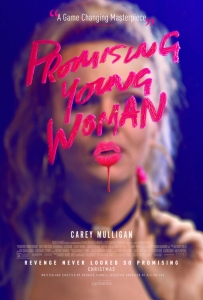 BASICALLY…: A medical school dropout (Mulligan) exacts revenge on those responsible for traumatic past incidents…

Of the eight Best Picture Oscar nominees this year, writer-director Emerald Fennell’s Promising Young Woman has been by far the most talked-about and hyped-up movie of the bunch. Gaining enormous attention from critics and audiences during initial festival showings – including a reported shouting match between some disgruntled members during a test screening – and especially after an eye-catching trailer campaign which led with a string-instrument rendition of Britney Spears’ “Toxic”, it quickly became something that general movie-appreciators were itching to see.

Then, of course, 2020 happened. It was originally due to come out last April, but then that obviously didn’t happen, and then after a US hybrid cinema/PVOD release around Christmas it was dated for a UK theatrical run in February of this year, but then that obviously didn’t happen, so now it’s finally debuting via Sky Cinema with just over a week to go until it finds out if it’s won any of its five Oscar nominations.

Whether it does or not, it’s been a rocky road for Promising Young Woman to reach UK audiences, but much like last week’s Palm Springs the wait was ultimately worth it.

In this dark, sly and devilishly uncomfortable movie, Carey Mulligan plays Cassie, a 30-year-old woman who’s in a state of arrested development, still living with her parents (Clancy Brown and Jennifer Coolidge) and working a lowly job in a coffee shop alongside Laverne Cox, after dropping out of medical school following a traumatic incident involving her best friend Nina. However, Cassie spends her evenings concocting a more malicious lifestyle for herself; she pretends to be drunk at nightclubs and gains the attention of so-called “nice guys”, who end up taking advantage of her assumed inebriated state despite claiming to have noble intentions, before she catches them out. Cassie’s life begins to take another potential step into cold-blooded revenge when she meets Ryan (Bo Burnham), a fellow medical student who’s now a paediatrician, and learns from him that certain other figures from her past have also come back into play, which puts her on a warpath against those who had wronged her and Nina before.

A movie such as Promising Young Woman, which tackles some incredibly difficult topics such as gender roles, predatory behaviour and toxic masculinity within a script featuring buzz words aplenty and grandstanding you’d normally find within a Twitter thread, does things so right that other recent movies like Black Christmas and The Craft: Legacy do so wrong. For one, it actually remembers to be a movie, instead of just being nothing but a two-hour lecture on why people are irredeemably terrible; the real strength of Fennell’s script lies in its boldness to be both a compelling revenge thriller while also balancing an alarmingly realistic portrayal of how, indeed, people have it in them to do absolutely awful things to other, non-consenting people. Fennell cleverly drip-feeds information to the viewer regarding Cassie’s backstory via choice dialogue exchanges and subtle visual cues, which are enough to give you a sense of why she’s going about doing the things that she does here, but far more crucially they reveal a far more self-destructive personality than even if she really was flat-out drunk. The director and writer is not afraid to have her lead character do and say terrible things that, in the hands of a far lesser filmmaker, would have made them a very unlikeable protagonist, but here it works since it makes the situation a lot less black-and-white because, truthfully, there are no real heroes in this story. It’s a far cry from the straw-man debates and over-the-top symbolism that plagued the likes of Black Christmas and as recently as Antebellum, and Promising Young Woman is all the better for it.

Part of what also makes the film such a fascinating watch is that you legitimately have no idea what direction it’s leading your down. The opening scene, which sees Adam Brody be the latest schmuck to fall victim to Cassie’s tricks, immediately sets you up for a story where anything could happen, and that’s very much true with how the rest of the film plays out, all the way up to the closing moments. Not only is Fennell incredibly good at lulling you into a false sense of security with certain people and plot threads before inexplicably pulling the rug out from underneath your feet, but a phenomenally fearless lead performance by Carey Mulligan keeps you second-guessing her character’s true intentions at every turn; you can never tell if she’s being genuine or putting on an act, even in scenes when she’s with people who she should feel comfortable around by that point, and the actress is brilliant at keeping the viewer on their toes until it’s finally time to come clean.

There’s a lot of uncomfortable actions that some viewers will certainly disagree with, which for a film tackling a number of triggering subjects would be amiss if it didn’t make you feel at least a little unclean, but by and large Promising Young Woman is incredibly sophisticated and intelligently handled material that feels extremely relevant – perhaps, regrettably, even timeless – in modern society. It is a film that puts a mirror up to some of our darkest attributes and forces us to stare into its eyes until we catch every glimpse of its ugly soul, and actually feels like it’s saying something unique instead of lazily throwing about buzz words in hope of some shock appeal.

As a debut feature for Emerald Fennell, she couldn’t have asked for a better calling card (that, and her Oscar nominations for her screenplay and direction certainly help too), and for UK audiences who have had to wait patiently for the movie to finally debut this side of the Atlantic, Promising Young Woman delivers on pretty much all of its promises.

Promising Young Woman is a smart and highly impressive calling card for debut writer-director Emerald Fennell, who tackles some very difficult subject matter with an even more complex lead character, but a combination of the filmmaker’s intelligent approach, that refuses to paint any of its scenarios black-and-white, and an utterly fearless lead turn by Carey Mulligan put this in a far different category of social thriller which actually has lots of things to say.