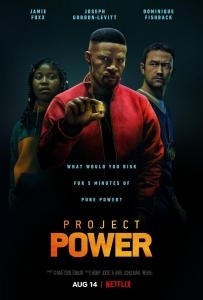 BASICALLY…: An ex-soldier (Foxx), a cop (Gordon-Levitt) and a teen drug dealer (Fishback) team up to stop a new drug – which temporarily gives users superpowers – from hitting the streets…

With Marvel and DC ruling the roost of superhero movies, some are eager for a much more different take on super-powered individuals, if only to cleanse their palate of the saturated fare of those big-time competitors.

Right now, Netflix seems to be on the right track with alternative superhero flicks, with last month’s The Old Guard gaining a strong audience, and now Project Power being another potential out-breaker with its fine cast, action-packed visuals, and most importantly what it does with the idea of where superpowers actually come from. All of it makes for a decent action movie on paper, but in motion the movie doesn’t have as strong a substance as it clearly has with its style.

Set in New Orleans, the movie deals with the arrival of a new pill called “Power”; basically, anyone who takes it will be endowed with superpowers for five minutes, although nobody knows for sure what powers they’ll get, whether they’ll be super-strength or camouflage, or simply just blowing up. Our main perspective is from Robin (Dominique Fishback), a teenage dealer of the new drug who’s working with cop Frank (Joseph Gordon-Levitt) to stop it from spreading, and who soon becomes involved in the mission of Art (Jamie Foxx), a mysterious former military operative who’s on his own path to find the source of the drug before it can cause too much harm.

There are a number of things about the movie which do work; for instance, the cast is really good, with Jamie Foxx easing by on his own natural charisma, and Joseph Gordon-Levitt doing what he can with a somewhat underwritten role. The real story here is Dominique Fishback, who is poised to break out big should this movie do The Old Guard-levels of viewership, because she gives an earnest and truly down-to-earth turn that makes her someone you can easily root for amidst some of the utter carnage that goes on here, not to mention some impressive rapping skills which come in handy every now and then when the movie takes some time out to develop its characters. The lead cast is certainly strong, with Fishback being the true highlight, and the idea of the movie itself is interesting, as similar to films like Limitless and Lucy though it may be; what would indeed happen if all the possible superpowers were condensed inside a single pill, and most importantly would you take it? Right there, it offers a lot of possibilities, mostly dealing with moral dilemmas and a potential commentary on the on-going drug wars, not to mention how it could portray a superhero world that’s also in this really gritty and crime-infested cop universe.

Unfortunately, the movie doesn’t capitalise on many of those possibilities. In fact, when you break down the overall plot, it’s surprisingly formulaic; there’s a lone wolf who’s eager to find something – or someone – that’s close to him, who’s been held captive by a bunch of shady government figures who want to harness the powers for themselves, and then it’s action scene after action scene until the final act where true motives are revealed etc. This is the most disappointing aspect of the film, in that it has a set-up that could be really interesting to explore, and yet it opts to go down a route that’s been well-trodden and explored by so many other films that it doesn’t feel as fresh or as exciting as the plot suggests it might. It makes the movie all the more forgettable, especially when there’s not much outside of the strong acting and central idea that pulls you in to this world; certainly not a majority of the action scenes, which are mostly glazed in some pretty bad CGI that takes you right out of the movie, and are shot with such intense shaky-cam and rapid-fire editing that it makes it hard at times to tell what’s even going on. Even the characters, as strong as the performances are by the likes of Jamie Fox and Dominique Fishback, feel paper-thin when you realise that it’s mostly the actors’ easy charisma that’s carrying your interest, and not the actual characters themselves.

It’s a disappointingly thin movie that wastes a lot of its potential for something generic and not that engaging, outside of a few strong turns by its performers. If you’re eager for something which does do something more interesting with superheroics, watch The Old Guard instead; by comparison, this pill is a little trickier to swallow.

Project Power disappointingly doesn’t capitalise on a number of its many possibilities, instead opting for a more generic plot with less-than-stellar action scenes, although the performances – particularly from young breakout Dominique Fishback – are strong and charismatic enough to get you through this otherwise forgettable style-over-substance thriller.

Want to decide what the movie’s like for yourself?
Check out Project Power streaming links
via