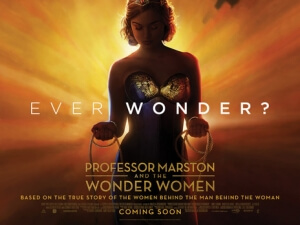 The second movie to feature Wonder Woman this year (and the first of two to land within a week of one another) has far kinkier things on its mind than just superhero antics. However, Professor Marston and the Wonder Women isn’t so much about the character herself, but it is rather a film about the DC character’s creator and his very unorthodox relationship with both his wife and mistress, which makes for light but no less thrilling viewing that also happens to have a genuinely sweet centre at its core.

When we first meet psychologist William Moulton Marston (Luke Evans) in 1947, he’s giving testimony to the Child Study Association of America about some of the racy material in his comics, such as the use of ropes and spanking that hint at sadomasochistic undertones. The rest of the film is told in flashback, when we see that both William and his wife Elizabeth (Rebecca Hall) take quite the liking to his new teaching assistant Olive Byrne (Bella Heathcote), and together they create the lie detector as well as conduct research on his DISC (Dominance, Inducement, Submission, and Compliance) theory – but more importantly, develop such a fascination for each other that they soon enter a polyamorous relationship, something that’s considered a serious criminal act in the time this all takes place in. One thing leads to another, and soon William gets inspiration to create the comic character we all know today as Wonder Woman, but not without a few hiccups along the way.

Marston’s creation of Wonder Woman doesn’t really factor in until late into the second act of the film, so this film is much more about his relationship with these two women, both of whom he clearly loves to bits, and respects each of them as their own individual beings. It’s a very likable relationship he shares with Elizabeth, as there’s seems to be a mutual appreciation between both husband and wife for their intellect and strength, and once Olive comes into the picture that high respect is only quantified by how much Olive seems to genuinely love these two people, and how much they seem to adore her. All three make up what is perhaps one of the most heartfelt love triangles in a long while, and when you see them working together as a mini-unit it’s not only adorable but you really want them to be together despite the numerous amount of laws they are breaking by just being together. Evans, Hall and Heathcote have great chemistry together which helps enormously, and individually they have their unique charms to them that make them interesting and three-dimensional characters in their own right, not to mention how they certainly make the three-way romance believable and also thrilling in unexpected ways.

It may also be one of the most arousing films of the year, putting the likes of the Fifty Shades films to utter shame (or at least, more shame than they’re already experiencing). The sexual tension between Marston, Elizabeth and Olive is something that can be felt in every scene, and once certain desires are given into, the way is paved for scenes of passion that are filmed so intimately by director Angela Robinson, as are later scenes where rope-ties and the basis for the comic character’s costume factor in, which create a beautiful image of bondage that, again, the Fifty Shades movies wish could be this arousing. The racy sexuality of its three lead characters plays a deep and spiritual role in the story, as for them it’s not necessarily about pleasure but more to do with expressing their shared love for each other in the way that human nature intends us to do. Marston’s DISC theory plays into the film’s narrative as well, almost like chapter titles depending on the current mood of the scene, and as he intended it works well to show how shared compassion between people can lead to true happiness within one’s self, something that again Robinson intimately portrays and with a light but no less alluring touch.

The racy content of the film shouldn’t put people off from seeing it, as at its centre is a beating heart that leaves you with a warm feeling inside, and that is down to how well this romance is portrayed, how interesting Marston’s inspirations for Wonder Woman are, and just how it manages to both arouse and entertain without being too smutty about itself as well as being mature enough to give it reason for being. You should definitely choose this for your kinky viewing night over any of the Fifty Shades movies, as you’re more likely to feel something down there more than anything you’ll find in any of those films combined.

Professor Marston and the Wonder Women is a legitimately sweet and intimately told film about the unorthodox relationship between William Moulton Marston and his wife and mistress, and manages to be both arousing and mature about its subject in fascinating and titillating ways.