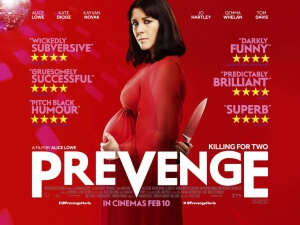 BASICALLY…: After her boyfriend dies, a pregnant woman (Lowe) is convinced by her unborn foetus to go on a vengeful killing spree…

Ever since Psycho, crazy mothers have been popping up in quite a few horror films over the years like Carrie, The Babadook, and the very first Friday The 13th – but what of crazy mothers-to-be? Sure, pregnancy has been explored and exploited in quite a few flicks of the genre already, but probably not in the way that first-time director Alice Lowe has managed to do with her debut feature Prevenge, an oddball but fascinatingly dark horror-comedy that takes maternal fears to a whole new level.

Lowe, who also writes and stars, is Ruth, an expectant single mother just about ready to pop… both physically and mentally. Distraught over her boyfriend’s death, seemingly by accident during a climbing trip, she begins adopting various guises to entice several people into a false sense of security, and then slaughtering them in cold blood. As if things couldn’t get crazier, her murderous odyssey is being controlled by none other than the unborn baby inside her, who tells its mother via mental communication to act violently when the time is right… or, perhaps more likely, she’s just crazy and seriously in need of an epidural before actually giving birth. Until then, she’s a raging, walking sociopath who happens to have another person growing inside of her.

The film has received publicity for the fact that Lowe herself was actually seven months pregnant all throughout the three-week shoot, which given that she made a film about a crazy pregnant woman who kills people is a pretty ballsy feat for any female filmmaker. However, while it certainly helps her devilishly dead-pan on-screen performance by actually having a baby inside her uterus to react to, even in the most graphic of scenes (a kill which involves emasculation is Tarantino-level gross), as a director it also gives her a more personal angle to approach the psychotic side of things with. Her script allows her to play around with the common paranoias of pregnancy, such as that the baby can start to take control of the mother’s mind whilst still developing, and the ensuing psychosis brought about by the fact that there is literally another human being inside your body, and it might not be entirely friendly. Lowe leans more towards a Taxi Driver-style approach to these paranoias in both her writing and direction, painting the character of Ruth as someone who in her mind thinks she’s a hero for doing what she does, even though in reality her mental state is severely warped and extremely dangerous, and the results are as graphically violent as Travis Bickle’s final showdown in that film.

It may take advantage of these numerous paranoias in the most sinister ways possible, but Prevenge is also rather funny in places. Lowe’s previous writing credit was for director Ben Wheatley’s Sightseers (which she also starred in), and it’s the same type of dry, black-as-night comedy from that film which she brings here under not-very-different circumstances – in fact, if you’ve watched that film, you can go into Prevenge with the head-canon theory that Lowe’s character is actually her one from Sightseers just a few years later, hence her murderous ways. Here, though, the humour comes mostly from the satirical elements surrounding the ideals of pregnancy, including a midwife played by Jo Hartley who misinterprets her patient’s feelings for just another normal day on the maternity ward, which is where the film shines brightest in the comedic department. Other gags tend to be hit-or-miss and sometimes not keeping with the tone of the rest of the film, like a gross-out scene with a character throwing up into a wig, but when it does hit the sweet spot it can be sly and unforgiving in its dark sense of humour.

Even though it has a few first-time-director problems, like an inconsistent tone (is it meant to be disturbing? Funny? Satirical? Some scenes don’t offer the satisfaction) and repetitive scenes that build toward a slight anti-climax, Prevenge shows that Lowe has a lot of promise as a filmmaker, and with perhaps a slightly bigger budget that could allow her to develop her ideas even further, she has the potential to really make something that might gain her the attention and appreciation that she deserves.

All I’m left wondering is what Lowe’s child will think some years later, when she discovers she was technically a co-star in her mother’s film about a pregnant serial killer. Those therapy sessions will be interesting…

Prevenge is a strong-enough first film by debut director Alice Lowe, who also writes and stars in a gleefully dark horror-comedy that has enough fun with common pregnancy paranoias to overcome some of its flaws.