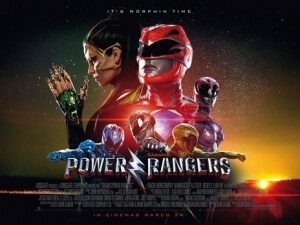 BASICALLY…: A group of teenagers gain special powers and become the Power Rangers, which comes in handy when the evil Rita Repulsa (Banks) comes to cause mayhem…

The Power Rangers franchise has been around for over two decades, entertaining children and adults ever since its debut in 1993. In that time, it’s spawned several TV series, endless toy lines, and high revenues in home media distribution – but oddly enough, when it comes to its films, they haven’t been as successful. The first one, 1995’s Mighty Morphin Power Rangers: The Movie, didn’t receive as strong praise from fans or audiences, while 1997’s Turbo: A Power Rangers Movie fared even worse, and when plans were announced for a big-screen reboot there was an equal amount of people who were both excited and sceptical of it. After all, as both previous attempts had managed to prove, their successful episode formula isn’t one that automatically translates well into an hour-and-a-half to two-hour narrative, so there’s no way it could actually work this time, right?

To the astonishment of almost everyone, Power Rangers somehow manages to succeed in being far better than some people might be expecting, although not without a fair share of problems… which, for a Power Rangers movie, is absolutely phenomenal.

The film is an origin story for the main group of teenagers-cum-heroes featured in the original 1993 series, which is comprised of Jason (Dacre Montgomery), Kimberly (Naomi Scott), Billy (RJ Cyler), Trini (Becky G) and Zack (Ludi Lin). At school, they’re a bunch of outcasts who don’t fit in with their peers, but once they all come across a set of coloured stones in a mine, they gain superhuman strength and agility, which they then learn are necessary to become the Power Rangers, a team of intergalactic warriors that defend the world from multiple threats. Mentored by a digitized alien known as Zordon (Bryan Cranston) and his robotic sidekick Alpha (a CG creation with the voice of Bill Hader), they must learn to come together and use their powers to defeat the sinister witch called Rita Repulsa (Elizabeth Banks), who has a destructive scheme that involves a whole lot of gold.

I should probably point out at this point that I am not a Power Rangers kid; I certainly watched it a few times in my youth, but never religiously like some other kids did. Even back then, I knew that what I was watching was pretty silly, with its cheap-looking costumes and nonsensical plots (not to mention its heavy use of Japanese stock footage for fight scenes), and whenever I did watch the show it was mainly out of my childish curiosity. Some twenty years later, my indifference to the show remains intact, but I was still surprised that there were times in this movie where I actually found myself caring about the characters, interested in the story, and feeling excited whenever there was a major action set-piece about to unfold. The actors playing these teenagers are all charismatic and have good chemistry with each other, so for the first time in my own personal Power Rangers history I actually cared whenever one of them was expressing their feelings or revealing new bits of information about themselves. The plot, as far as origin stories go, is much more engrossing than something like Josh Trank’s Fantastic Four (or Fant4stic, if you’re being snarky), and you feel every new development connecting naturally to what came before it. Some of the action is initially hard to make out at first, on account of the constant shaky-cam the cinematographer decided to employ for its visuals, but once it got going it was silly, exciting, and fun.

I was shocked by how much I was legitimately finding myself enjoying this film, but then every once in a while there would come something dumb and ridiculous to remind me of its inherent stupidity. For one, it never quite settles on the right tone, something that is evident from the very start; immediately after a brief and intense prologue that sets up Zordon’s role in the film, there’s a gag about milking a male bull in a school gymnasium. It struggles to find its footing at several points, being dark and serious one minute and then silly and rambunctious the next; it’s not an awful tonal shift, and if anything this film handles it better than many others like it, but it’s frustrating when you can see how uncertain it is in itself. Also, be prepared for some of the most obnoxious and forced product placement for Krispy Kreme you’ll ever see in a motion picture; I’ll spare you the details for now, but whenever major characters name-drop the brand in actual sentences, it is so jarring it might as well be in a cupboard.

Other little things here and there, from a few ropey visual effects to some characters being given more of a focus than others, also help prevent Power Rangers from being a genuinely good movie, but for the wholly decent product that we still managed to get, let alone from something as mindless and child-orientated as Power Rangers, is frankly astonishing. It’s not going to be for everyone, but then again was Power Rangers ever for everyone? For what it was, I enjoyed it just fine, and you probably will too if, like a lot of kids in the early 90s, you just give it a chance.

Power Rangers does a decent enough job of rebooting the franchise for the big screen, with fun characters, an engaging story and some pretty cool action, and while it’s not without its faults, including some bizarre tonal shifts and some truly cringe-worthy product placement, it’s far better than it probably has any right to be.