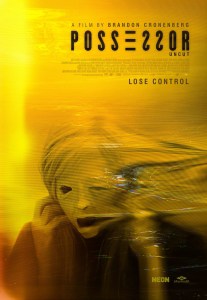 BASICALLY…: A corporate assassin (Riseborough) who uses technology to implant their subconscious into other people’s bodies finds herself trapped in the mind of another man (Abbott)…

This review is of the cut shown at the BFI London Film Festival in October 2020 – the UK release date is currently listed for November 27th 2020.

Yes, your assumptions are correct: Possessor director Brandon Cronenberg is indeed the offspring of noted genre filmmaker David Cronenberg, the Canadian maestro behind bizarre body horror entries like Scanners, Videodrome, The Fly and Naked Lunch, among numerous others. In addition, it looks like Brandon took heavy inspiration from his father’s peculiar taste for out-there slices of WTF cinema, and implemented them into his own offerings, having previously made a splash with his 2012 debut Antiviral, and now Possessor which also goes full Cronenberg but with a significantly unique touch that separates him from his father’s shadow.

A cold, chilling and highly original sci-fi thriller, the film follows a woman named Tasya Vos (Andrea Riseborough), a corporate agent who works for a shady organisation that has created technology which can implant her subconscious into another person, allowing Vos to carry out high-profile assassinations without tracing anything back to her or her superiors. Vos is regarded as a formidable agent in her field, due in part to her lack of emotion attachment (she even has to feign true feelings when she visits her together-but-not-together husband (Rossif Sutherland) and their young son), and when she is given a new assignment – to inhabit the body of a man named Colin (Christopher Abbott), whose girlfriend Ava (Tuppence Middleton) is the daughter of Tasya’s target, arrogant businessman John Parse (Sean Bean) – she is more than eager to get underway. However, once inside Colin’s mind, she begins to find that her host is not as willing to forfeit control as she thought, and soon both she and Colin engage in a game of mental tug-of-war over complete possession of his body.

Brandon Cronenberg’s film is a fascinating oddity, not least because of its unusual premise; the idea of inhabiting other people’s bodies via advanced technology has a realm of possibilities from which it can branch off of, but Cronenberg opts for a tone that identifies how creepy such an idea can be, while also setting it in a very-near-future environment (if I had to guess, maybe four or five years from now) where such fantasies feel entirely, and scarily, plausible. It’s strange enough that in this universe, people can plant their subconscious into another person in mere seconds and assume full control of their body, but to see the psychological toll it is taking on those who are continuously using it for malicious intent is another thing entirely, which is where Cronenberg really takes after his namesake with disturbing visuals of melting skin and quick cuts of neon-drenched abstract imagery. Nevertheless, the director manages to keep you on edge all throughout, with a story that doesn’t waste time with certain misgivings about literally walking in someone else’s shoes, and highly stylised – even fetishized – moments of gore that do not hold back on their bloody severity.

Where Cronenberg really manages to stick the landing is the unconventional approach it has to its characters, most notably the lead. This is the kind of movie where there are no real heroes; just people we’re following who happen to be doing very questionable things along the way, especially Andrea Riseborough’s Vos who, by most accounts, is kind of a sociopath, incapable of emotion to a point where she can no longer muster genuine feelings towards her own family. Despite showing signs of trauma when she consistently flashes back to past assassinations which ended in severe bloodshed, her focus is solely on the mission with the belief that anyone she comes across in someone else’s body is just as expendable as her target; to some, this can make her seem extremely cold and unsympathetic – especially during the shocking climax – but that is entirely the point of the character. She is someone who has all but sacrificed her humanity for her work, and this current job is merely the latest test to see if she can control herself enough to carry out merciless killings without blinking. The actress does a strong job of conveying her character’s increasing emotional isolation, as does Christopher Abbott who likewise has a lot to work with as he embodies not one but two different characters all at once, often in the exact same scene.

It’s a compelling, highly entertaining thriller with some very disturbing ideas and themes, all done with a clear passion for the material that only a Cronenberg could deliver, and quite honestly it’s worth checking out if you’re eager for something which takes an intriguing concept and goes unexpected places with it. Not since Leigh Whannell’s Upgrade have I seen a sci-fi horror/thriller that goes all in on its out-there yet somewhat plausible premise, although this one is perhaps a less fun sit if only for its darker and more sinister tone (Upgrade has its fair share of dark moments as well, but by and large it has more opportunities to shine as an action-thriller in addition to full-on sci-fi body horror), but definitely be sure to check this one out as well whenever you can.

Possessor is a chilling sci-fi horror/thriller that takes as much advantage of its intriguing and original premise as it possibly can, delivering a compelling and highly entertaining film with plenty of smart thrills and lots of gory violence that make writer-director Brandon Cronenberg a worthy disciple of his more prolific father.