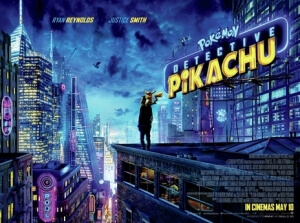 BASICALLY…: In a world populated by Pokémon, the son of a famous Ryme City detective (Smith) teams up with an intelligent Pikachu (Reynolds) to solve his father’s disappearance…

When I was seven years old, I remember wanting a Pokémon of my very own. Like most kids back in the late 90s and early 2000s, I was obsessed with the Japanese craze; I collected the cards, I played the games, and of course I watched the anime show religiously to a point to where the lyrics to its theme song have become ingrained into my head, and back then all that I felt was missing was to have an actual Pokémon by my side. I didn’t care if it was a Pikachu, a Bulbasaur, a Charmander, or even a Magikarp; the seven-year-old version of me just wanted one of those magical animals to exist in the real world.

Of course, my priorities changed as I got older, and I developed new obsessions and interests as I became a fully-functioning adult; but now that Pokémon: Detective Pikachu has finally fulfilled my childhood fantasy of bringing Pokémon to photo-realistic life, I am firmly reminded of my childhood dreams and wishes and have been transported back to being that seven-year-old once again, simply awed that, for the first time, I am getting to see what a Pikachu would look like in the real world.

That’s only one of the things I enjoyed about this movie, which is a fun and entertaining family feature that neatly sets itself up as a nice introduction – or re-introduction, in my case – to the bright and colourful world of Pokémon.

Set in a world where humans and Pokémon live among one another, young Tim Goodman (Justice Smith) is summoned to Ryme City where his father, the detective Harry Goodman, has apparently been killed in a car accident. There, he stumbles upon Harry’s pet Pokémon: a talking, intelligent and coffee-addicted Pikachu (voiced by Ryan Reynolds) that wears a detective’s hat, and seems to have no memory of where he came from. Pikachu teams up with a reluctant Tim, along with budding reporter Lucy (Kathryn Newton) and her pet Psyduck, to solve the case of both Harry’s death and his past, which soon leads to the discovery of a plan that threatens all life in the city.

Anyone who grew up during the height of the Pokémon craze will be enthralled with how this film brings them to life, through some excellent photo-realistic CGI and also the extraordinarily faithful designs that have been given to them. Every single one of them, from Pikachu to Charizard to even Mr. Mime, looks exactly how we all remember them from our childhoods, without too radical a redesign to a point to where they become unrecognisable (looking at you, Sonic the Hedgehog…), and the CGI on them is so good – from their fur right down to their expressive eyes – that for a moment you actually do think that they’ve found a way to bring Pokémon into existence. It’s a very pleasing movie to look at, beyond just the gorgeous CGI; it’s laced with colourful cinematography which neatly plays with neon lighting and moody shots that are straight out of a detective thriller, and the action scenes are very inventive while also being really entertaining.

The greatest wonder you’ll be looking at, though, is the sweet and heartfelt emotion that’s been poured into this movie, by a director and a group of writers who clearly harbour a lot of love and respect for this property. This is something that could have been so easily half-assed and approached with a cynical attitude – after all, it’s a franchise built entirely around selling games, cards, toys and other merchandise – but by giving it a soul as well as characters that are actually fun and likeable makes it a real stand-out amongst other big-screen iterations of popular things from our childhoods. Reynolds is clearly enjoying himself in the recording booth as the sleuth Pikachu of the title, and even though he’s not on-screen he shares a nice chemistry with Justice Smith, who himself is a good character to get behind as the de-facto straight man of the central pairing; together, they’re a partnership that you actually understand, and one where you feel for them when things go sour for them in certain places, which gives the movie tons of heart and some genuinely dramatic moments that are very well handled by both the actors and the filmmakers.

The movie feels like a modern-day version of Who Framed Roger Rabbit, not just in the sense that it’s set in a universe where animated creatures co-exist in a real society with real people, but in how it’s structured and even shot like a mystery movie, albeit one that just happens to have Pokémon in it. While the central mystery itself is pretty predictable – as soon as one person shows up, you kind of know exactly what their secret agenda is long before the main characters do – the journey they go on, as they encounter one Pokémon after another in several different situations (one of the film’s funniest scenes involves an interrogation with Mr. Mime, which suddenly gets hilariously and unexpectedly dark), is extremely fun and light-hearted enough to make you want to carry on, even when you know exactly where it’s all going to eventually end up. It’s an enthralling experience for anyone who holds a special place in their heart for the world of Pokémon, or even anyone who’s fairly new to the whole thing as it’s a fun and likeable movie with a simple but entertaining story to follow.

Overall, I’m just happy that my childhood dreams of seeing what a real Pokémon would look like have been fulfilled, and thankfully it’s just as adorable as I had always imagined.

Pokémon: Detective Pikachu is a fun and likeable family movie that will absolutely delight fans with the wonderful CGI which brings the creatures to extraordinary life, but also win over newer ones with its simple but entertaining story.

Check out Pokémon: Detective Pikachu showtimes in London
on Walloh.