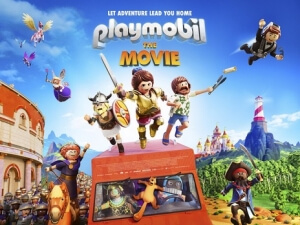 BASICALLY…: When Marla (Taylor-Joy) and her younger brother Charlie (Bateman) are transported to the animated world of Playmobil, she must gather the courage to save him from captivity…

The German toy line of Playmobil is to LEGO what Pepsi is to Coca-Cola; both certainly have their fans, and in their own unique ways have experienced multiple successes, but there’s no getting around the fact that one of them is, and always has been, a mere rip-off of the much more famous brand. You’d never see someone walk into a toy store and willingly ask the person at the counter about the latest releases from Playmobil; odds are, they’d ask about what’s new with LEGO, because not only is that the more embraced toy brand worldwide, but they also have better products as well as a far bigger canvas of imagination than its German counterpart, which appears to have been created solely to cash in on their Danish rival’s enormous success.

It therefore makes an uncomfortable amount of sense that Playmobil, a toy company designed from the get-go to be a LEGO rip-off, would also bring out its own movie that blatantly rips-off – what else? – The LEGO Movie, a clever, funny and heartwarming movie that took its corporate origins and morphed it into something genuinely fantastic. Needless to say, Playmobil: The Movie doesn’t have any of that; it is what most people feared The LEGO Movie would actually be, a soulless, cynical and downright embarrassing marketing ploy designed to advertise a product that wasn’t even very good to begin with.

In the first of many things that the film steals from the far superior Phil Lord-Chris Miller outing, it has a live-action segment; this one follows Marla (Anya Taylor-Joy), who is forced to take on the responsibility of looking after her younger brother Charlie (Gabriel Bateman) after their parents are killed in a car accident. After an argument, Charlie runs away to a toy store where he finds an entire model world made up entirely of Playmobil figurines, and suddenly a magic beam transports both him and Marla into the all-animated world of Playmobil, where Charlie – now looking like a bearded Viking warrior – is kidnapped and taken to a coliseum where the evil Emperor Maximus (Adam Lambert) forces him and other warriors to battle a ferocious monster. Marla must now venture through the vast world of Playmobil to find and rescue her brother, with the assistance of food truck driver Del (Jim Gaffigan) and suave secret agent Rex Dasher (Daniel Radcliffe).

It’s a movie that borrows so heavily from other movies – and not just The LEGO Movie; there are plot cues taken directly from Finding Nemo and Frozen (the latter of which this film’s director, Lino DiSalvo, worked on as the Head of Animation) – that it fails to acquire an identity of its very own, and what little inspiration it has to try and be its own unique thing isn’t very strong either. The humour fails to score any kind of laughs, the characters are so one-dimensional that actual Playmobil figurines have more depth to them, and even the animation feels underwhelming with its all-too-smooth textures and movements; The LEGO Movie actually brought style to its visuals, resembling a stop-motion movie half the time through photo-real designs and a slower frame rate, and not only that but it also had memorable characters, a fantastic sense of humour, and a self-aware attitude that recognised the ridiculousness of it all. Playmobil: The Movie, on the other hand, plays it completely straight, with no hint of irony or even a sense of fun; from the very beginning, it feels like a product churned out just so that they can push the brand name without trying too hard, and it never loses sight of its cynical reasons for existing which greatly hurts its chances to actually be something beyond just a soulless cash-grab.

Assume for a moment, though, that The LEGO Movie never existed and this was the first film of its kind to be released: would it still work? The answer is a resounding “no”, as it has very little to offer young audiences with its generic plot of believing in oneself and rediscovering fun, extremely thin characters who barely stretch beyond their one defining trait – Radcliffe’s secret agent Rex Dasher is arrogant, and that’s it; Lambert’s villainous Maximus is campy, and that’s it; and so on, and so on – and some very cringeworthy musical numbers that feel ripped right out of Disney’s songbook. By the way, I forgot to mention that this movie is sometimes a musical, the kind where characters just suddenly burst into song for absolutely no reason, because a key word for this movie is “sometimes” – sometimes this movie has musical numbers, sometimes it’s a straightforward adventure movie, sometimes it’s a modern-day fairy tale, and all the time it’s completely chaotic and makes absolutely no sense whatsoever. It is designed purely for very young audiences, similar to the actual Playmobil line of toys, and because of that there appears to be very little effort to actually get into meaningful themes or valuable life lessons that could potentially help early-years children develop their feelings and emotions. Instead, this is a mere distraction so that young children can be entranced by the pretty colours while their parents take a much-needed break for an hour and a half, and like most other films with that purpose it will be quickly tossed aside when they discover a library of much better and more nurturing movies aimed at their age group.

One of those movies is, once more with feeling, The LEGO Movie which does nearly everything that Playmobil: The Movie tries doing but does it so much better and with actual passion and soul behind it. That movie proved that everything is awesome; this one is most certainly not.

Playmobil: The Movie is a soulless imitation of much better family movies like The LEGO Movie that lacks their charm, creativity and passion while instead doing absolutely nothing to stimulate the minds of its very young target audience.

Check out Playmobil: The Movie showtimes in London
via