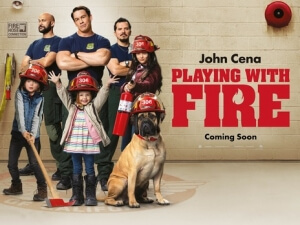 BASICALLY…: A group of rugged firefighters are forced to care for three rambunctious children after saving them from a fire…

I am so, so happy I was able to see this film before its Boxing Day release. That’s not an indication of the movie’s quality, because it is absolutely awful, but it’s more about the fact that I was able to rectify a previous mistake of mine.

For a bit of context: last year on Boxing Day, after I had finally locked down my end-of-year best and worst lists, I ended up seeing Holmes and Watson, and one of the many things that irritated me about that terrible movie was that I could not include it on the worst of 2018 list, simply because I saw it right after the deadline. If I had managed to see it at an advanced screening beforehand, then I guarantee it would have featured on there somewhere, but alas it was sneaky enough to avoid such detection.

This year, I knew that Playing With Fire was going to be released around the same time, when this year’s lists would similarly be locked down, and after hearing how atrocious the movie was from critics I trust and respect, I became determined to see the film way before the deadline so it would actually qualify for the list.

Luckily, I was able to attend a screening well in advance. Unluckily, that screening was for Playing With Fire, which is an utter embarrassment for every single person involved with this movie, from the people that made it to the audience that watched it.

The film stars John Cena, Keegan-Michael Key and John Leguizamo (along with Tyler Mane, aka Michael Myers from Rob Zombie’s Halloween movies, as a mute axe-wielding psycho uncreatively named Axe) as a group of smokejumpers situated in the Californian wilderness. They end up saving three young siblings from a cabin fire and must care for them until their parents show up, but they turn out to be the most unruly, rambunctious and godforsaken little demons they could have chosen to rescue; they are loud, annoying, and seem rather ungrateful that these men risked their lives to save them from a massive fire, and yet we are supposed to feel sympathy for them as the grown men inevitably start to warm towards these kids, because it’s one of those movies where the hardened macho men must find their inner child once more or some BS like that.

Watching this movie is like seeing some people that you know and like put on a comedy show at your local community theatre, but they are doing such a bad job at it that you can’t help but feel guilty that you were supporting their misguided endeavour in the first place. Everything about this movie feels off, from the static cinematography to the staging to especially the editing, which is all done in such a way that suggests this whole production was assembled right at the last minute with very little thought going into the jokes or the story or anything. It feels more like a particularly rubbish Nickelodeon sitcom than a movie, and I have no idea if that was the intent of director Andy Fickman (I’m guessing it wasn’t, because this is the same guy whose previous film was Paul Blart: Mall Cop 2) but it’s almost as though he just threw his hands up in the middle of production as a sign of him just giving up, and just made it seem as direct-to-television quality as he could possibly make it.

The movie incorporates such bottom-of-the-barrel jokes and slapstick that it’s extremely demeaning for anyone who’s ever been in a comedy before this. Keegan-Michael Key, who as we all know is a very talented comedic actor, is reduced to mostly stuttering and flamboyantly waving his hands around without ever once being funny with it, coming across more like an extremely closeted man than someone who’s meant to be the comic relief in this “comedy”. He and everyone else, from Johns Cena and Leguizamo to Judy Greer, are utterly wasted in parts that could have easily been played by Adam Sandler and his regular crew; in fact, the movie looks and feels so much like a Happy Madison production that it leads one to wonder if this script was indeed originally written for those guys, but even they had the decency to say no to this one. That’s extremely odd given that the film’s many fart and poop jokes, particularly one gross-out gag involving a hazmat suit, would have fit right in with one of Sandler’s most notorious outings, and even then would have been a step too far down into the pits of Hell.

It fails on a filmmaking aspect, because it is so uninterestingly shot and made that you could have re-edited this into a half-hour TV sitcom and it wouldn’t look at all out of place, and especially on a script level – did I mention that spliced right in between scenes of uninspired slapstick and poop jokes, there are dramatic monologues? Needless to say, the tone for this movie is all over the place – which makes the whole thing look like a complete and utter embarrassment. Not once do you feel like it’s being genuine with its emotion because, again, they’re spliced in between scenes where a little girl craps herself, nor does it feel like any thought whatsoever was put into making this story make any kind of coherent sense (I don’t expect high art from a film like Playing With Fire, but at least give us something we can latch ourselves onto within this nonsensical world). I honestly felt bad for every single actor in this movie, who have all done far better things than this yet were given this to do by their agents who really should have known better, and most of all for anyone who goes to see this laugh-free monstrosity that’s so devoid of laughter that not even the outtakes during the ending credits raise a chuckle.

So, yes, I am extremely glad I was able to see this film before it officially came out, because now it means I can actually include it on this year’s worst list. How high will it feature? Well, you’ll just have to wait until later this month to find out, but unlike Holmes and Watson last year this is one terrible film that is not going to get off lightly simply because it came out right after my own deadline.

Playing With Fire is one of the year’s worst films, with terrible TV sitcom-like qualities in its filmmaking and lazy, bottom-of-the-barrel jokes to match the tonal inconsistencies of its script and characters, rendering it an utter embarrassment for everyone unfortunate enough to be involved with this horrible excuse of a movie.

Want to decide what the movie’s like for yourself?
Check out Playing With Fire showtimes in London
via