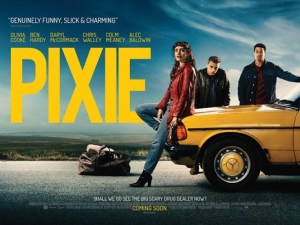 BASICALLY…: When a heist goes wrong, a young woman (Cooke) and her friends (Hardy and McCormack) find themselves going up against local gangsters…

The first five minutes of Barnaby Thompson’s Pixie set the tone for everything about to come: two would-be robbers, driving in a car on their way to the heist, trade quick back-and-forths that quickly reveal their personalities and insecurities (one is still very much hung up on their ex, despite being broken up for six months), and everything seems like it’s going well until one quick slip-up results in an unhinged conclusion.

It’s obviously played for darkly humorous effect, and sometimes the dialogue raises a few good chuckles, but the blatant inspiration of Quentin Tarantino hovers over it like a stormy cloud in the sunshine. It’s hard not to envision the Pulp Fiction filmmaker being flattered by what is essentially a feature-length tribute act, with hints of John Michael McDonagh in there as well, but against all odds Pixie is still a fun and entertaining crime caper which finds plenty of joy on its own terms within the Tarantino playhouse.

We are quickly introduced to Pixie (Olivia Cooke), a young Irish woman who’s the daughter of a local gangster (Colm Meaney), and the mastermind of aforementioned heist against a rival clan of priest gangsters, from whom a duffle bag of MDMA is stolen. However, when that heist goes south, Pixie finds herself teaming up with a pair of small-time drug dealer friends (Ben Hardy and Daryl McCormack) who have ended up with both the MDMA and a body in the boot of their car, and the three go on the lam to try and sell the drugs, acquire their share of the money, and avoid the gangsters who are after them.

Essentially, this movie is as though John Michael McDonagh made Y Tu Mamá También instead of Alfonso Cuarón (there is even a threesome at one point), only with a heavier lean towards black comedy and eccentric gangster motifs. Part of the movie’s fun is watching Cooke’s Pixie and her two companions encounter one strange character after another, from a leering shop owner to Dylan Moran as a blunt drug dealer, and fighting their way around them with nothing but their fast wit and keen optimism (with the occasional sudden burst of violence). The actors’ easy chemistry and strong charisma, especially coming from an energetic Olivia Cooke,  makes you want to root for them despite sometimes exhibiting very questionable patterns of behaviour as they move from one scenario to the next, which again contribute to the film’s penchant for dark humour that some will be onboard for all the way, but others will probably find a little discomforting (there are some lines of dialogue and certain implications that feel a little dated in 2020).

By the time things begin to wrap up – complete with a slow-motion shoot-out with gun-brandishing priests led by an Irish-accented Alec Baldwin, who’s having fun here but he’s really in the film about as much as he’s in the trailer – you feel as though you have also been on a wild cross-country journey with these colourful and likeable characters, and you’ve felt comfortable enough in their presence to want to perhaps go on more adventures with them (though where the film ends up, a sequel somehow seems out of the question). Barnaby Thompson, who had previously directed the two previous St. Trinian’s films, gives the film a light but still digestible tone that makes it easy to watch without focusing too much on the unpleasantries, something that contributes to how simple and accessible this film can potentially be for mainstream audiences. It never takes itself too seriously – after all, how could the sight of Alec Baldwin holding a weapon in a full priest getup be anything other than funny? – and the script is littered with amusing one-liners that the actors roll off their lips impressively; sure, it’s significantly lighter material than the works of filmmakers like Tarantino or McDonagh that have clearly inspired this film, but Pixie isn’t really setting out to be among those greater examples.

Instead, it’s an enjoyable tribute performance to those styles of filmmaking, with enough fun qualities to make it a decent watch on its own, even though it never fully shakes away its blatant influences. If anything, it’s worth it just to see Olivia Cooke’s endlessly charming lead performance alone.

Pixie is a fun tribute to the filmmaking and writing styles of filmmakers like Quentin Tarantino and John Michael McDonagh, even though it is considerably lighter material than either one of those auteurs have worked with in the past, but this film has enough fun qualities to make for an entertaining sit, from a bunch of charming performances (particularly from lead Olivia Cooke) to the eccentric sight of Alec Baldwin in a slo-mo shoot-out with a bunch of nuns.