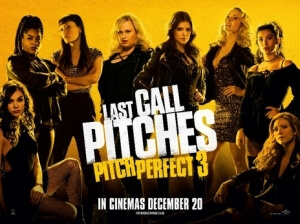 BASICALLY…: The Barden Bellas reunite one last time to perform across Europe, and compete against other bands who use actual instruments instead of their voices…

Like many other trilogies that never really should have been trilogies, the Pitch Perfect film series has always declined a little bit in quality with each passing – and wildly unnecessary – movie. While the first Pitch Perfect wasn’t a massive success at the box office, it did well enough to gain a bit of a cult following, enough to almost make it this decade’s equivalent to Mean Girls in terms of its endless quotable lines and highly imitable A Capella covers of hit songs. The second movie was an even bigger box office smash, but reaction was much softer in comparison and it’s hard to find someone who remembers much of what even happens in that film.

Now, with the inevitable trilogy closer Pitch Perfect 3, the series has finally reached that low bar where they just don’t seem to care and are doing whatever the hell they want, because they know you’ll still go out and see it. But even though it’s probably the series’ weakest entry, at least in terms of plot, there are one or two things worth seeing it for – but outside of that, there really isn’t much reason to see this unless you’re still a fan of these movies.

The tone is set right from the very first scene: in a flash-forward, the A Capella group the Barden Bellas are all singing a rendition of Britney Spears’ “Toxic” on a luxury yacht in the South of France. Suddenly, series mascot Fat Amy (Rebel Wilson) literally comes crashing through the roof, and suddenly it’s a scene straight out of a direct-to-video Van Damme movie. Well, that doesn’t sound very much like Pitch Perfect at all, you’re probably thinking, and you’d be right; the previous films had plenty of scenes featuring outrageous comedy, but with this it seems like they just decided to throw in an action sub-plot for no real reason without even making it funny, as though in the writers’ room they just threw random story beats to the wall and used whatever stuck, which represents a serious downgrade in actual comedic writing that the first film at least had an idea of.

This isn’t a dream sequence or anything, either; we then cut straight to a title card that says “3 weeks earlier”, and the plot begins proper. The Barden Bellas, which also include Beca (Anna Kendrick), Chloe (Brittany Snow), Emily (Hailee Steinfeld), Aubrey (Anna Camp) and the rest, are now graduated from college and struggling to fit in with the outside world where A Capella isn’t exactly a hot job prospect. A reunion leads Aubrey to have the idea of entering them all into an overseas USO tour, where they would also compete with other musical bands to land a spot as the opening act for the upcoming tour of DJ Khaled… and yes, he does appear in this movie, quite frequently as a matter of fact, to a point to where the movie will just stop to either namedrop him or admire him as some kind of modern musical god. Seriously, he’s in this movie more than John Lithgow is, and he plays the main villain; in yet another sub-plot, he plays Fat Amy’s estranged father who’s a gangster of sorts, and ties directly into that tonally-off opening scene described in the last paragraph.

As you can tell, there’s quite a bit going on in this movie, so much so that it leaves very little room for the characters to shine as much as they did in the previous films. A lot of them are now just walking stereotypes of their own characters, with Fat Amy in particular just being there to drop a comedic one-liner even when the scene doesn’t call for there to be one, and many of the other series standouts like bizarre Asian group member Lilly (Hana Mae Lee) being given almost nothing to do this time around – though the few things she is given to do generate some of the few genuine laughs in this movie. There’s not even a solid basis for a plot this time around, and it’s mainly just made up of rehashed elements from the first two films – the Bellas are entering a singing competition, AGAIN; Beca is torn between her loyalty to the Bellas and her own musical aspirations, AGAIN; and so on – which even then feel mostly tossed to the side in favour of one crazy set-piece after another. It feels like they really wanted to go all out on what is likely going to be the very last of these movies, but by doing so they’ve lost the quirky spirit of what made the original film so unique and beloved, and instead have made something that feels much more cynical and soulless, not to mention pandering to the young teenage audience who this series is directly targeted towards.

But as ridiculous as this movie is, when it does actually show the Bellas doing what they are best known for – that is, singing covers of pop songs using nothing but their voices – that’s when the movie really gets into a groove. Not only are they catchy as hell, but these actresses seem to have developed a good rhythm with one another to really make it sound like they are more into this than they probably are. The covers are quite fun to listen to, and it is in these scenes where the movie feels like it’s right where it belongs, in that realm of toe-tapping feel-good nonsense that’s completely serviceable.

It’s a shame, though, that the movie surrounding them is mostly just a gigantic messy dud that closes the series out on a bit of a bum note, and doesn’t exactly set the bar high for any potential future reboot – which you know is probably going to happen, since no matter what this is bound to make quite a bit of money. Let’s pray that if there is one, DJ Khaled isn’t involved.

Pitch Perfect 3 ends the series on a bum note, with the memorable characters and fun A Capella song covers mostly pushed aside for a ridiculously overdone plot and a notably more cynical tone that replaces the original’s quirky spirit.