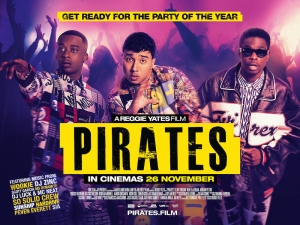 BASICALLY…: On New Year’s Eve 1999, three friends (Edusah, Peters and Elazouar) head out in search of the ultimate party…

Believe it or not, a movie can be set on the rough streets of suburban London, as well as feature a predominantly ethnic cast, and NOT be about rival gangsters or petty knife crime. So many examples of British urban cinema have unfortunately adopted these negative portrayals, whether we’re talking about Blue Story or Kidulthood, that a risk of stereotyping arises when discussing films within this category, the exact opposite effect of what the creative heads perhaps wanted to accomplish.

This makes it all the more relieving that Pirates – the writing-directing feature debut of actor and TV presenter Reggie Yates – opts for virtually none of those things, bucking the trend considerably with a light comedic tone and an undeniably big heart that shuns violence and gang warfare in favour of fun, if slightly familiar, adventures set to banging garage music.

Pirates is set in London on New Year’s Eve 1999, with virtually everyone in the capital getting ready to ring in the new Millennium. Our focus is on three best friends: Cappo (Elliot Edusah), Two Tonne (Jordan Peters) and Kidda (Reda Elazouar), who enjoy hanging out together and broadcasting their own DJ sets live from their bedrooms on pirate radio. However, with each of them on the cusp of adulthood – Cappo is now at university, while Two Tonne and Kidda are stuck in low-level jobs – they decide to mark the final days of their youth by finding the ultimate NYE party, where fun and possibly romance awaits them. Of course, the mission isn’t without its hiccups, leading to a bunch of hilarious and awkward misadventures over the course of their evening.

Small in scope and light on hard-hitting issues, Pirates is a simple tale that crosses the youthful debauchery of Superbad with the humour of The Inbetweeners (the characters even drive in a car that isn’t too dissimilar to the one from that show), but is highly pleasant in its handling of pure comradery and 90s nostalgia. Yates clearly has an adoration for this not-too-distant historical time period, and has lots of fun invoking fond memories of listening to garage hits from the likes of So Solid Crew and Ms Dynamite, playing Snake on Nokia phones, tending to Tamagotchis, and not knowing what this new search engine called Google is. He achieves this through sharp comedic writing and energetic direction which makes most of it feel natural without seeming too forced (though not every gag about certain aspects of 90s culture lands as well as others). As his feature debut, Pirates sets Yates up as a formidable storyteller who can take simple templates like the one used here and making it work on the strength of its charm and humour alone.

By far the biggest contribution comes from the three fine young actors that Yates has recruited to play his central leads. The chemistry between Elliot Edusah, Jordan Peters and Reda Elazouar is off the charts, with all three working extremely well together with some top-notch comedic timing and deliveries that greatly compliment their natural charisma. Scenes of them just messing about with each other, whether they’re smoking weed or singing along to songs in the car, are some of the most natural and delightful in the entire movie, because you really do feel their connection as well as how passionate they are about almost everything they come across. They single-handedly make Pirates an exceptionally more fun viewing experience, since it is hard to watch them together in this and not come away with a smile across your face.

The movie isn’t perfect, however; some of the 90s-centred gags don’t entirely land, with one involving the Backstreet Boys going on for a little longer than it needs to, while other characters outside of our lead trio tend to just slot too safely into the background (we hardly ever seen any of these boys’ parents, while female characters are mainly there to just be love interests or bitter exes). The movie is only 80 minutes long, but honestly there could have been parts where you could have maybe added at least another five minutes just to expand on certain plot points and characters that seem underdeveloped in the final cut.

However, for the most part, Pirates is a fun and good-hearted movie that has the makings of an underground audience favourite, setting not just Reggie Yates but his formidable three leads up for greater things further down the line. More importantly, it sets a positive new example for British urban cinema that doesn’t require gang violence to get its point across.

Pirates is a fun and good-hearted debut feature from writer-director Reggie Yates, who brings the spirit of the late 90s back with enjoyable writing and three lively performances from his young leads, which are enough to forgive some of its shortcomings in the gags department.

Pirates will be released in cinemas nationwide on Friday 26th November 2021 – click here to find a screening near you!