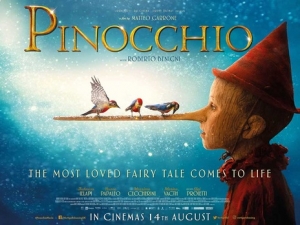 BASICALLY…: A wooden puppet named Pinocchio (Ielapi) comes to life, and finds himself in a series of misadventures…

Carlo Collodi’s fairy tale The Adventures of Pinocchio is a cultural milestone, charming readers for over 100 years, and inspiring numerous film adaptations – most famously the Disney one – but let’s be real for a moment: it is also kind of messed up. There are things in that original story that would give most kids nightmares, including some rather dark undertones that would shock even grown adults with its mean-spiritedness, not to mention some wildly insane characters and scenarios that would feel better suited in a Lewis Carroll story than anywhere else.

This kind of bonkers storytelling is all over director Matteo Garrone’s ambitious and faithful new version of the classic story, which is bound to be a massive knock to the cerebrum for anyone who’s only ever known the Disney version, and also a fascinatingly weird experience even for those who are more familiar with the original tale.

The film starts as lowly carpenter Geppetto (Roberto Benigni, in a somewhat redemptive bit of casting, given that the Oscar-winner directed and starred in his own version of the story back in 2002, which famously bombed both with critics and at the box office) builds a wooden puppet that he names Pinocchio. It isn’t long, of course, before Pinocchio (Federico Ielapi) comes to life, much to Geppetto’s amazement, and almost right away gets into a series of misadventures, from being captured by a travelling marionette show, to being conned by a couple of vagrants, to being taken in by a fairy and her giant snail companion, all the way to the rousing conclusion everyone probably already knows about, but as a professional courtesy I’ll keep under wraps here.

On a technical aspect, I cannot fault this movie. It is rather astonishing to look at, with some gorgeous cinematography and set design that’s on the same level as your average Tim Burton movie, adding to the fairy tale aesthetic that director Garrone – who has some experience in bringing fairy tales to life, seeing how one of his more recent films was the adult-centric Tale of Tales – takes as much advantage of as he can. The design of the title character itself is impressive; I honestly cannot tell if he is a CG creation or it’s just some very intricate make-up, but either way it’s convincing enough to make you believe there really is a wooden boy right there in the frame. The overall use of make-up and practical effects is highly commendable, seeing how some characters are given full animal faces which look extremely detailed, and as for some of the more outlandish characters such as that giant snail, a cantankerous monkey judge, and a nihilistic tuna that Pinocchio meets much later on, their distinctive features stand out in ways that a much more CG-reliant production couldn’t manage.

However, seeing how this is a much more faithful version of the story than most other versions which audiences might be more familiar with, I can see some of the younger viewers – or even some of the older ones – being kind of freaked out by some of the stuff that goes on here, which can sometimes be downright traumatising. There is a point in this movie where a major character – a fairly young character, no less – is hanged from a tree, and you see the body just dangling there for a few solid seconds with barely any life to it whatsoever; later on, characters attempt to euthanise an animal by tying it to a rock and drowning it in the sea. Even I found myself uttering the phrase “Jesus Christ!” during a couple of these moments, and I do respect that they were lifted directly from the source material, but imagining a somewhat young audience nowadays seeing that sort of stuff on-screen was keeping me distracted from the actual movie. Of course, there are some kids who might be perfectly fine with seeing pretty dark things in their movies – after all, a lot of kids in the 1980s grew up on some pretty sinister stuff and most of them turned out perfectly fine – but in today’s more sensitive world, I doubt it will go over as well with today’s youth as it would have back then.

I should probably also mention that this version of the film is a specially-recorded English dub, instead of being in its original Italian language with English subtitles. At first, it was kind of distracting as I would notice that the audio was not syncing up all that well with the actors’ lips, but you do get used to it after a while, and after reading about how Garrone paid for it out of his own pocket, even getting actors Roberto Benigni and Federico Ielapi to specially re-record their lines in English, you have to respect the dedication that went into something that could have otherwise torpedoed the film just like that infamously bad English dub of the 2002 version (all I’ll say is, they got Breckin Meyer to dub over Roberto Benigni – need I say more?)

The movie is a strange beast, because you’re constantly being blind-sided with so many weird characters and insane plot turns – in other words, experiencing the original story – but it is such a meticulously crafted movie that you have to respect the ambition behind its utter madness. I know that Disney is currently developing a live-action version of its own take on Pinocchio, but somehow I highly doubt it will be as ballsy and out-there as this strange, yet admirable, version of a pretty dark fairy tale.

Pinocchio is a highly ambitious and faithful adaptation of the classic fairy tale, with some impressive production values that include some extremely convincing make-up and gorgeous cinematography, though some of the story’s darker elements might not sit well with a younger audience who might be more familiar with the Disney version than the actual story it was based on.

Want to decide what the movie’s like for yourself?
Check out Pinocchio showtimes in London
via