Pieces of a Woman (Review)

Pieces of a Woman (Review) 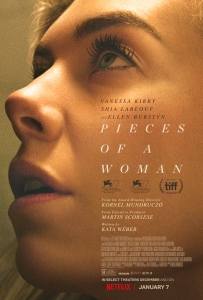 BASICALLY…: After a tragic home birth, a couple (Kirby and LaBeouf) must deal with the emotional aftermath…

Fair warning: anyone who has ever gone through the trauma of losing an infant during childbirth will very easily be triggered by this movie. It is an unspeakable thing for any parent to experience, let alone the mother who has to deliver the baby, and Pieces of a Woman does not sugar-coat how rough and emotionally devastating it can be. I know a couple of people close to me who have very tragically miscarried at some point in their lives, or the baby was stillborn despite a reasonably healthy pregnancy, and should those people be by some miracle reading this I would advise they perhaps refrain from watching this, because God knows how much emotional trauma could be brought back to the surface should they queue it up on Netflix.

That being said, even with all of its heavy and often bleak look at grief from the perspective of a couple going through the unimaginable, the film is nonetheless a stirring watch, fuelled by some excellent performances and key filmmaking skills which come in handy whenever the time calls for it.

We start on a September day in Boston, when an expectant couple – Martha (Vanessa Kirby) and her partner, construction worker Sean (Shia LaBeouf) – are preparing for an organised home birth. When their arranged midwife backs out at the last minute, their replacement Ava (Molly Parker) arrives at their home as Martha begins going through labour, and slowly she guides her through what at first seems like a straightforward birth – until, devastatingly, tragedy strikes. What follows is a months-long mediation as both Martha and Sean both deal with the immediate emotional aftermath, from flirting with criminal prosecution for Ava’s negligence, as spurred on by Martha’s domineering mother Elizabeth (Ellen Burstyn), to relying on drugs, alcohol and adulterous sex to numb the pain.

It is by no means an easy film to watch, especially if you’ve ever found yourself in the position that our two main characters find themselves in, but thanks to a sensitive line of smooth shots, delicate pacing and intimate framing, director Kornél Mundruczó (who shares a “Film By” credit with writer and partner Kata Wéber at the start of the movie, which is based on their play of the same name) easily pulls you into the drama like a suction cup. After the expertly crafted single-take shot that documents the central tragedy in real time, wherein Mundruczó and cinematographer Benjamin Loeb capture some seriously moody frames that always foretell what’s about to go down, the film settles on a much slower, but no less impactful, pace which examines the emotional fallout between this couple and those closest to them. Some parts can feel particularly slow-moving, especially after such a heart-pounding opening sequence, but the director ensures that your interest in seeing how low their levels of grief can get remains fully intact, without it ever becoming an overbearing or exploitative display of sadness. There are things that the characters do which you do not agree with in the slightest, nor are there really many parts where your sympathy for them feels completely earned, but the fact is that these characters are written, directed and shot in a way where you are at the very least still interested in seeing what becomes of them, and how they will eventually deal with this situation head-on.

Both Mundruczó and Wéber have a way of powerfully communicating their emotions through a tale that could only have come from very personal experience (I cannot say for sure whether they indeed went through what the fictional Martha and Sean do here, but it wouldn’t surprise me if it turned out both this film and the play it’s based on were direct responses to their own struggles) and they have chosen the right actors to convey these complex and devastating feelings on-screen. As the de-facto main focus, Vanessa Kirby is nothing short of magnificent in a role that requires her to go through some seriously unpleasant motions (her simulations of a woman in labour are some of the most realistic film portrayals of a dilating soon-to-be mother in a while), but she handles the heaviness of the material all too easily in a turn that is sure to define her for years to come. Her scenes against an equally-excellent Ellen Burstyn come with enough electricity to power a small town for life, and even in the film’s quieter scenes she stands out as a figure of both radiant beauty and sorrowful discontent. As for Shia LaBeouf, I know he’s a rather toxic name in the industry right now, but that does not prevent me from subjectively thinking his performance is also top-notch and that, had he not been removed from awards consideration in light of the recent allegations against him, he would have easily been just as much in contention for serious awards recognition as Kirby is right now. He really is that good here, and while this is much more of Kirby’s film than his anyway, I would not completely disregard LaBeouf from the conversation either.

Despite some slow-moving parts, and a climactic courtroom scene which doesn’t exactly keep with the grounded realism the film is otherwise set on delivering, Pieces of a Woman is a strong and often powerful film that definitely isn’t easy viewing, but is made worthwhile by some intriguing direction, writing and performances which collectively deliver a healthy drama to absorb.

Pieces of a Woman is a devastating but very well-made drama that will not sit easy with all audiences, especially with its uncomfortably realistic portrayal of tragic birth, but is made palatable by strong filmmaking and some excellent performances across the board, in particular an outstanding Vanessa Kirby and an equally powerful Shia LaBeouf who both deliver some extremely emotional turns.

Pieces of a Woman is now available on Netflix.