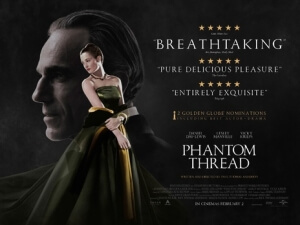 BASICALLY…: A high-end fashion designer (Day-Lewis) falls for his young muse (Krieps), which begins to have an effect on his difficult personality…

Ten years ago, Paul Thomas Anderson teamed with legendary method actor Daniel Day-Lewis for the filmmaker’s most ambitious project to date, a period piece set amidst the growing oil prospecting industry that showed how it could corrupt a man’s soul to the point of being completely irredeemable. There Will Be Blood went on to be nominated for several awards, and won just as many for Day-Lewis’s iconic performance in the film, and is widely considered by many critics to be one of the very best films of the 2000s.

A decade on from that filmmaking milestone, and both Day-Lewis and PTA – as the latter tends to be known in the media – are back together at last for a film that is neither as provocative nor as daring as their last collaboration. Instead, Phantom Thread is a different beast altogether; it is a sophisticated and well-groomed romance with one hell of a fashion sense but also not without a slightly more sinister edge to it, which pushes it a bit further over the edge than many other period-set romantic tales without necessarily falling to its graceful doom.

It is perhaps PTA’s most streamlined movie in years, or at least anything he’s done post-There Will Be Blood, but more importantly, it’s probably his strongest work since that other film a decade prior.

The film is set in 1950s England, where renowned fashion designer Reynolds Woodcock (Day-Lewis) makes dresses for socialites, royalty, film stars and many other high-end figures, along with his sister Cyril (Lesley Manville). He is also, however, a massive control freak who wants everything set to a meticulously drawn routine in an almost autistic sense, or else his brilliant mind struggles to concentrate on the thing he enjoys doing the most. This comes into play when Reynolds meets a beautiful waitress named Alma (Vicky Krieps), who soon becomes one of his dress models and eventually his lover, but his domineering and demanding personality frequently clashes with Alma’s more outgoing nature, and so begins an emotional and shocking power struggle between the two for domination in their relationship.

This is artful filmmaking on PTA’s part, with every piece of direction, line of dialogue and spectacular visuals – Phantom Thread also marks his first (unofficial) credit as cinematographer, since regular DP Robert Elswit was unavailable to shoot this film – looking and feeling like a fashion shoot, complete with costumes that are truly stunning works of art in and of themselves, and swift and elegant production design that itself is as though it was carefully stitched together by someone with a true passion for set-making. It is a gorgeous-looking film, one of the filmmaker’s most handsome productions to date in his career, not to mention it contains an absolutely outstanding score by regular composer Jonny Greenwood, who mixes classical orchestral score with soothing jazz, soft piano chords and the Radiohead musician’s own flavour of unconventional composition, to not only bring this film more to life than it already has been, but to give it an extra layer of beauty amidst some of the more questionable character traits you’re witnessing on the screen. The musical score feels like a character in its own right, accurately portraying the right kind of emotions going on in the scene like an unseen Greek chorus, and coming in at just the right moment when a grand swoop of music is entirely called for. Greenwood’s score for this film is easily the best he has yet done, serving as a fantastic companion to an already outstanding movie.

When you get an incredibly accomplished actor like Day-Lewis in your lead role, chances are that he – through his infamous techniques of method acting – will completely disappear into the part and find aspects of the character that even the writer won’t have considered when writing the script. It’s worked out incredibly well for him so far, earning countless awards for his work over the years and constant praise for being one of the greatest actors of all time, so it should not surprise you in the slightest that, in Phantom Thread, he is once again excellent in more ways than one. It’s a far less showy and over-the-top role than Daniel Plainview in There Will Be Blood, but for his second film with PTA – and most likely his last before retirement, if reports are indeed accurate – he scales back considerably far and designs for his director a portrait of a man so wound up in his tight regime that even the slightest misstep can completely throw him off balance, and he’s not afraid to make him an unlikeable presence as he lets his monstrous ego get the better of him. Like I said, it’s no surprise that a fantastic actor like Daniel Day-Lewis is once again fantastic in this kind of movie; but the real revelation is Vicky Krieps, a Luxembourgian actress who more than holds her own against an acting titan like her co-star (as well as Manville, who is also excellent in this film), and delivers the kind of vulnerable and sweet performance that can launch quite the career for her in the long-term. It’s unfortunate that she has largely been overlooked this awards season, especially in the shadow of Day-Lewis and even Manville, because she is most certainly the film’s secret weapon who deserves as fair a chance in the spotlight as her co-star.

It’s arguably PTA’s best work since There Will Be Blood, and while it may not be for everyone – but then again, which one of his films truly is universal? – Phantom Thread is a finely sewn quiet masterpiece of both filmmaking and acting.

Phantom Thread is Paul Thomas Anderson’s finest work since There Will Be Blood, and certainly his most handsome production to date with fantastic visuals, a career-best score by Jonny Greenwood, and of course a mesmerising lead performance by Daniel Day-Lewis in his final role before retirement, although Vicky Krieps deserves to be just as much in the conversation for her own powerhouse career-making part.