PG: Psycho Goreman (Review) – What If The Guyvur Were A Disney Channel Sitcom? 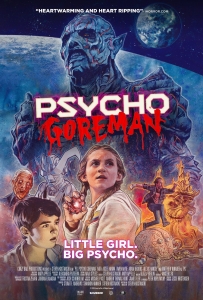 Some bad movies earn their cult status over years of underground fan appreciation, while others are quick to deem it excellent so-bad-it’s-good entertainment right off the bat. But then you have movies like PG: Psycho Goreman, which practically dare viewers to make internet memes out of them and endlessly quote their numerous memorable and unintentionally funny one-liners.

It’s so obvious that there is at least a little bit of cynicism when it comes to the bizarre choices made with this film, but at the same time it’s hard to dunk too hard on it because it is also a film that knows exactly what it is, and runs with everything it’s got in its cheap, gloriously cheesy arsenal.

The movie is about young siblings Mimi (Nita-Josee Hanna) and Luke (Owen Myre), who one day stumble upon something rather interesting in their backyard; an alien overlord (Matthew Ninaber in physical form, with the voice of Steven Vlahos), who has been imprisoned on Earth after a failed bid to take over the galaxy. The kids manage to free the alien from its underground chamber, but before it can continue with its plan of universe domination, it finds itself at their merciless whim since they possess the mysterious gemstone he was buried with, which also causes him to obey their commands without hesitation. The kids – more specifically, the rather manic Mimi – re-name their new subject “Psycho Goreman” or “PG” for short, and get him to do their bidding, even if it means transforming their friend Alasdair (Scout Flint) into a giant brain mutant, or simply getting him to play their extremely convoluted game called “Crazy Ball”. Of course, there are other aliens who also want a piece of PG, and when they eventually make themselves known it’s time for a universe-defining showdown.

The best way to describe this film is if something like The Guyvur were in the same universe as a Disney Channel sitcom; you have this family who constantly deliver their lines and physically act as though there’s a studio audience in their heads that’s laughing at every line of dialogue they’re uttering, mixed in with gory violence where (human) heads are ripped off and entire flesh is melted down like they’re the villain at the end of Robocop, all of which is shot and executed like it’s the bloodiest episode of Power Rangers to ever exist. It’s all clearly part of the joke, as PG: Psycho Goreman is clearly intended to be both a parody and a loving homage of cheesy, campy sci-fi movies from the 80s and early 90s, specifically the ones deemed to be “family-friendly” at the time like Gremlins and Poltergeist (believe it or not, there was a time when both movies were given a PG rating). You can tell that the filmmakers are doubling down on the typical clichés of those movies, but with an extremely knowing sense of humour, with even the more heartfelt moments containing satirical qualities that show they’re aware of the kind of film they’re lovingly mocking (a tender heart-to-heart between two characters involves being lured into a van by a creepy older man, and it ends with the kind of message you’d find on a South Park episode). Everything else from the writing to the low-rent effects to especially the acting is truly reminiscent of a movie from those eras which perhaps hasn’t aged great some decades later, and in that respect it’s admirable in how these people are intentionally going out of their way to bring back this kind of campy sci-fi schlock.

You can pick out the many dumb things about this movie until the break of dawn, and none of them would be wrong necessarily, but again this is the kind of movie that is counting on being poorly received by critics and audiences so it can achieve its desired cult status sooner than expected. It’s certainly a movie that will make you laugh at how silly and blatantly low-budgeted it is (the entire climax of the movie takes place in a tiny warehouse, for goodness sake), but unlike a lot of unexpected cult hits over the years this one knows exactly what it’s trying to do, and part of me doesn’t want to really give it the satisfaction because, truth be told, I did find myself losing interest every now and then. While it’s cool seeing them use practical effects with some of the alien designs and even bringing back stop-motion to animate certain parts, the movie can be quite obnoxious to sit through with some of the performances, characters and dialogue going so far over-the-top that it’s hard to see them as anything other than baiting people on the internet to create new memes based on them. I get and appreciate what they’re trying to do here, and it’s likely it’ll work for plenty of other people, but it didn’t entirely gel with me.

It probably will indeed become a cult movie in a few years’ time, but PG: Psycho Goreman hasn’t completely made me a convert.

PG: Psycho Goreman ticks all the boxes for future cult movie status, from its gleeful parodying and homage to cheesy sci-fi flicks of the 80s and 90s, but parts of the meme-baiting execution might be too obnoxious for some.

PG: Psycho Goreman is now available to stream on Shudder.