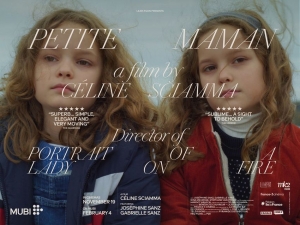 This review of Petite Maman was conducted as part of the BFI London Film Festival 2021.

Writer-director Céline Sciamma’s follow-up to her audience favourite Portrait of a Lady on Fire is much smaller than even her biggest admirers might have predicted. Conceived during the first French lockdown last year, and then filmed during the second, Petite Maman exclusively features a cast of five actors in a remote location close to Sciamma’s hometown, and runs at just over 70 minutes. However, the film packs an awful lot into that short amount of space and time, with the limited resources available (Sciamma even acts as her own costume designer), and before even the full hour is up you’ll be completely entrenched in this absolutely wondrous and charming tale of childhood.

The film opens as Nelly (Joséphine Sanz), an eight-year-old girl, is travelling with her grief-stricken mother (Nina Meurisse) and her somewhat absent father (Stéphane Varupenne) to the countryside home of her grandmother, who has just passed away. Once there, while her parents sort through the grandmother’s things, Nelly goes exploring in the nearby woods, where she comes across another similarly-aged young girl named Marion (Gabrielle Sanz), who is building a hut made of sticks, eerily similar to the one that her mother – who has abruptly left, presumably to sort herself out – used to build when she was a child. Sure enough, Nelly soon pieces together that Marion is indeed the younger version of her mother, who lives in a different but similar house with her still-alive mother, Nelly’s grandmother (Margo Abascal), as she awaits around for some life-altering surgery. Both girls nonetheless decide to make good use of the limited time they have together, and form a very special friendship that transcends beyond the magical realism of the situation.

Sciamma has crafted a very simple and straightforward story that anyone of any age can watch and understand, with a timelessness and universality that should make it a real classic in the future. Its simplicity harkens back to some of the gentler offerings from Studio Ghibli, with slight hints of magic in how smoothly the light-as-a-feather plot transitions from one moment to another, and beautiful naturalism that she instils upon her incredibly sweet young performers. Both Joséphine and Gabrielle Sanz are twin sisters in real life, so it comes as no surprise that they share lovely chemistry on-screen together, whether they’re making pancakes or play-acting as inspectors and murder suspects in their own murder-mystery. It really feels like you’re just watching two young kids play with each other, and not an adult’s idea of how children should be playing, which also makes it an ideal companion piece to Sciamma’s past kid-centric tale Tomboy (other films of hers including Girlhood and her debut Water Lillies are more about teen characters, whereas both Tomboy and Petite Maman focus on pure childhood).

In traditional storytelling terms, Petite Maman lacks significant ingredients like conflict and a villain, but at the same time this movie doesn’t need either of those things to succeed. It simply wants to tell a simple story about a young girl befriending a child version of her own mother, and does so in such an endearing manner that you immediately forgive it for its narrative shortcomings. Sciamma has a way of telling straightforward stories without any of the normal bells and whistles that come with standard filmmaking, but always keeps her focus on the things that matter, in this case the blossoming connection that both young girls share with each other. Neither seems to really care that one is from the future while the other will later go on to become their mother, because as children they are just trying to make sense of the more complex world around them, and the lack of concern for what really matters in favour of just having as much fun as they possibly can is very true to the one-track mindset of a child. Sciamma understands this thoroughly, and through her series of vignettes she embraces the innocent perspective to make hers a bittersweet but incredibly emotional story to tell.

Some may perhaps be put off by its refusal to stick to certain storytelling traditions, but as a sweet and charming exploration of childhood with a touch of magical realism, Petite Maman is a beautiful piece of work that will enchant Sciamma devotees and possibly win over some new ones too (in case Portrait of a Lady on Fire didn’t quite do the job for you). It could very well end up like the director’s Tomboy and become compulsory viewing for young audiences – that film was approved to be studied as part of the French curriculum for its transgender themes – which would be ideal not just for young audiences in France, but across the world as well.

Petite Maman is a delightful slice of magical realism, which sees writer-director Céline Sciamma deliver a pleasantly simple story that packs a wallop of natural emotion into its short running time, along with a couple of charming lead turns by young actresses Joséphine and Gabrielle Sanz.

Petite Maman will be released in cinemas nationwide on Friday 19th November 2021 (as of publication).

It will also be available to stream exclusively on MUBI from Friday 4th February 2022 – click here to get your free 7-day trial today with Amazon Prime Video!