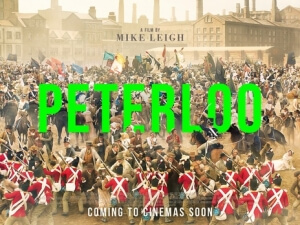 BASICALLY…: In 1819 Manchester, a peaceful protest against the government ends in a bloody massacre…

In 1819, Britain was in a flux; the cost of the Napoleonic War had severely impacted the working class, especially those living further up north, which became increasingly angry with the wealthier government and the Prince Regent, and organised a peaceful protest in St. Peter’s Field in Manchester to demand parliamentary reform. Things, however, turned bloody when the cavalry showed up, resulting in one of the most barbaric and deadly episodes in British political history with around 15-17 people killed and several hundred others seriously injured.

It’s an event that many will likely not have heard about until Mike Leigh’s new historical epic Peterloo, which is exactly the point that Leigh seems to be making here; the filmmaker has been vocal about wanting to educate audiences about every last detail because he feels it deserves to be regarded as a defining moment in British history, which it really is because the massacre was a major step towards shaping British politics to what they are today, and as we approach its 200th anniversary it is a piece of history that really shouldn’t be ignored.

In that regard, I admire Leigh for his ambition in giving us the hard facts about virtually everything leading up to that fatal day; but in doing so, he hasn’t been able to tie it all together with a plot or set of characters that fresh audiences can find to latch on to, making it an impressively made but simultaneously rather cold experience.

The massacre really serves as the film’s climax, with the majority of the film being about all the things preceding that, from the cruel power of the corrupt and greedy judges in charge of the northern land, to the outspoken publishers of the Manchester Observer newspaper, to the struggles of working-class families represented by one that includes Maxine Peake as its matriarch, to the involvement of noted liberal orator Henry Hunt (Rory Kinnear), to all of the political group meetings calling for reform or more extreme cases of violence against the Crown.

Anyone that has seen a Mike Leigh film in the past, especially one of his historical epics like Topsy-Turvy or Mr. Turner, will know that he really likes to share every last little detail on the screen, often resulting in films with extended running times that allow for practically everything in the situation to be given its moment in the spotlight. Peterloo, which runs at just over two-and-a-half hours, is no exception, as Leigh crams as much information as he can about this one moment in history – even the most minute of details such as the making of the swords that the cavalry would use at the titular event – that it feels more like one big history lecture than a film with a traditional three-act structure and designated lead characters. This is the kind of film where nobody is a true lead; it constantly switches from perspective to perspective, showing us the factual events as they happened as told from people who happened to be there at that time, which leads to characters that had previously been set up as being major players to either be relegated to the background or disappear entirely for long periods. It is a rather unfocused film as a result, since Leigh refuses to designate any one person as the audience surrogate and just lets several characters try to duke it out for the spotlight, leaving the audience to feel somewhat emotionally detached since there is really no-one for them to connect with as everything is going on. You’re just left watching scenes of people you don’t know that much about, nor are you given enough time with them to find out who they are or what their contribution to society is, talking about things that you honestly have a difficult time trying to understand. That sort of thing is fine if Peterloo were a historical documentary, or even a book; but as a film, it doesn’t work if you’re trying to find something within the facts to care about as you’re watching it, which is a rather big misgiving for something that clearly wants to showcase a significant point in history, because it’s not enough to just show us what happened, you also have to give us a reason to care.

As cold and emotionally detached as the script may be, there is no denying the sheer craftsmanship that is on-screen at all times in this movie. This is probably Leigh’s most ambitious production to date, with a cast of several thousand extras filling out the screen to enormous effect, and sets and costumes that feel very much of the time period which are also rather exquisitely designed. Dick Pope’s cinematography helps expand the world to an almost epic quality, with the climactic massacre sequence shown in full bloody horror without shaky-cam to hide some of the more disturbing consequences of the quarrel. There’s not a weak link in the cast, including more recognisable actors like Maxine Peake and Rory Kinnear who are great in their respective parts, and lesser-known performers who make their cases heard in memorable and often delightful manners. On a side-note, I found it extremely amusing that Blackadder alumni Tim McInnerny was cast as the Prince Regent in this film, which leads me to believe either Lord Percy filled in for Hugh Laurie’s George during this time, or if it was just another one of the Scarlet Pimpernel’s disguises (watch the show if you don’t know what I’m on about).

With this film, Leigh has shed light on an important moment in our history that isn’t talked about very often, and he should be commended for doing so as the extremely talented filmmaker that he is; I just wish that it was a lot more emotionally engaging, because that way I could actually care about all of this history happening right in front of me.

Peterloo is an impressively-made slice of history that sees director Mike Leigh ambitiously spotlight all the intricate details surrounding the Peterloo massacre of 1819, but the lack of focus and meaningful characters to get behind hinder it from being truly substantial viewing.