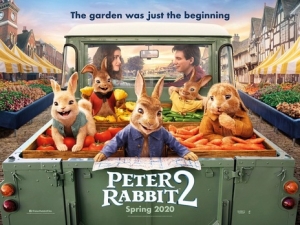 BASICALLY…: Peter Rabbit (Corden) runs into some more mischief when he ventures outside the garden…

Film fans rejoice, for cinemas have finally re-opened (again) as the path to normality makes its next big step. It is a momentous day for all of us who have had to rely on streaming and VOD for our fixture of movie entertainment over the past five or six months – and, for some, even longer – but, at last, we now have the option once more to view films like Peter Rabbit 2 as they were meant to be seen: on the big screen, surrounded by strangers in a dark auditorium while snacking on popcorn and slurping on several beverages.

It helps tremendously that Peter Rabbit 2, the first in my personal victory tour of big-screen debuts this week (and keep your eyes peeled on plenty more over the next few days), is also rather delightful. Beyond the fact that it was so wonderful to watch in the appropriate theatrical setting, with the additional stereo sound effect of young children laughing hard at all the antics – an annoyance in the before-times, but given the occasion I’ll allow it – this is a funny, charming and exceptionally heartfelt family movie which, like its underappreciated predecessor, puts much more cynical adaptations of beloved children’s characters to shame.

The film opens with Peter Rabbit (voiced once again by James Corden), the blue-jacketed mischief-maker himself, acting as ring-bearer for the wedding of Bea (Rose Byrne) and Thomas McGregor (Domhnall Gleeson), whose union brings joy and warmth to the garden, and its many animal inhabitants. However, Peter finds himself unable to shake off his mischievous reputation, especially when a smarmy book publisher (David Oyelowo) persuades Bea, who’s been writing tales of the rabbits and their friends, to market Peter as “the bad seed” in order to drive book sales. Sick of being defined as such, Peter soon becomes drawn to a small group of street thieves, led by fellow rabbit Barnabus (Lennie James) who claims to have once known Peter’s father, and eventually lures his fellow animal friends – including sisters Flopsy (Margot Robbie), Mopsy (Elizabeth Debicki) and Cotton-Tail (Aimee Horne, replacing Daisy Ridley from the first film) – into causing all sorts of mischief alongside him.

While these Peter Rabbit movies are perhaps not the most faithful to the simpler and gentler tone of Beatrix Potter’s original stories, they still manage to work surprisingly well as their own thing, while also paying a good deal of respect to the characters’ timelessness and overall strong heart. You won’t find any unnecessary gross-out gags in this, nor any forced-in references to pop culture that immediately cheapen the overall product; in fact, the filmmakers actually make fun of that quite a lot in this movie, with Oyelowo’s character serving as a movie studio executive-type character (thinly disguised here as a book publisher) constantly pitching insane ideas to Rose Byrne’s Bea – who, for the record, seems to be intentionally named after the original author – about the rabbits wearing hip t-shirts and jeans, and even taking their adventures into space. It’s clear that director and co-writer Will Gluck has a tremendous sense of awareness when it comes to adapting something as innocent and universally beloved as Peter Rabbit for a major studio like Sony, and has really gone out of his way to prevent his film from being bombarded with cynical studio notes designed, as shown here, to morph it into something it never started out as. It’s an approach that works, as not only does Gluck manage to satirise the very nature of capitalising on innocent childhood characters – in a strange way, making it the Gremlins 2: The New Batch of Beatrix Potter movies – while also paying respect to the source material, but also does it with a tremendous amount of humour and underlying intelligence that you simply don’t get in movies like Alvin and the Chipmunks or The Smurfs.

It also, thankfully, remembers to actually be a movie, with a very funny script that’s got a decent plot, some good messages for children, and a lot of fun characters that often get some strong, legitimate laughs. While there’s a little less of the human characters this time round – which, sadly, also means a little less of Domhnall Gleeson being hilariously manic – the animals that it hones in on are lively and jovial enough without becoming too obnoxious, brought to life by convincing CGI and are central to some sight gags that often got me belly-laughing (I don’t want to give away too many of the jokes, but one involving the London Stock Exchange really had me doing a spit-take). The themes, gags and even the emotions feel more confident in this one, and while I hesitate to immediately put in the same rank as strong family sequels like Paddington 2 (this film doesn’t have an amazing Hugh Grant as the villain, which is an automatic deduction of points for just about anything), Peter Rabbit 2 is definitely a follow-up which feels overall stronger, because it keeps the energy and the humour at a consistently effective level, while also treating its audience and the source material with the respect they deserve.

Again, as with the first Peter Rabbit movie, it’s unlikely to win over anyone who is hoping for something that does stick extremely close to the original works of Beatrix Potter, but as its own product with enough slapstick and enjoyably self-aware commentary, these movies perhaps do not get enough credit. Both of them, especially Peter Rabbit 2, do well where others like SCOOB! and Tom & Jerry: The Movie didn’t (and I didn’t even dislike the latter as much as others), where they certainly felt way more like the kind of manufactured and pandering studio products that this film has set out to mock, while this one actually wants to make a fun, sweet family movie out of equally smooth material, and is all the better for it.

But who knows, maybe I’m being so positive about this film just because I’m on a high from actually seeing a movie in the cinema for the first time in 2021. Either way, it’s not a bad way to return to the big screen.

Peter Rabbit 2 is a very enjoyable family sequel which takes its fun characters in some respectful and heartfelt new directions, and also finds time to provide some amusing meta commentary on the nature of capitalising on innocent stories such as Beatrix Potter’s, all while also remembering to be an engaging and often very funny movie in its own right.

Peter Rabbit 2 is now showing in cinemas nationwide – find a screening near you right here!