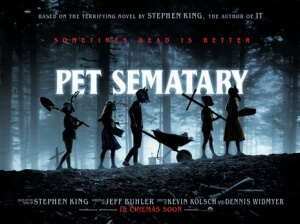 BASICALLY…: A tragedy-struck family unwittingly releases an eerie supernatural force when they come across a mysterious burial ground…

Of all the stories he’s written, Stephen King has declared Pet Sematary to be the one that scared him the most. That’s really saying something, because when the guy who wrote about killer clowns, haunted hotels, murderous dogs, sinister children and even “shit weasels” (thanks, Dreamcatcher) declares a story about undead pets to be far spookier than any of them, you know that it has to be a whole new level of horror even for someone like King.

Most fans agree with this statement, declaring the book to be one of his darkest, and the subsequent 1989 film adaptation to be one of the scariest of any King book-to-film translations; it will be interesting, though, to see what they make of this new version of Pet Sematary, because as someone who has neither read the book nor seen the original movie, I perhaps didn’t find it quite as scary as it was being built up to be. It’s not a bad product by any means, but after so much talk of this being such a disturbing story that even King himself thought it was nightmare fuel, I couldn’t help but feel a little disappointed that I wasn’t as scared as I would have liked to have been.

The story follows the Creed family, including medical doctor Louis (Jason Clarke), his wife Rachel (Amy Seimetz) and their two young children Ellie (Jeté Laurence) and Gage (played by twins Hugo and Lucas Lavoie), as they move from Boston to a quiet area of the Maine countryside. There, they discover that not too far from where they now live is a mysterious cemetery for dead animals – marked by a misspelled sign labelled “Pet Sematary” – which their new neighbour Jud (John Lithgow) tells them is a sacred place for locals to bury their beloved furry sidekicks. When the family’s cat Church is run over, Louis and Jud bury it in said place, only to find it has miraculously returned back to life, although it is acting a lot more hostile than it used to. However, that’s not the biggest impact to happen upon this family, and when it does it sparks a deadly chain of consequences that are certainly creepy in theory, but there’s something in the execution that, for me anyway, didn’t entirely work.

I feel that this is largely in part because the trailers really did kind of ruin this film for me; the second trailer, in particular, highlights a major twist that happens a little later on into the film, as well as a certain character’s fate, so watching it all play out in the film I was mostly just waiting for those things to happen rather than actually being shocked by them, because I already knew they were going to happen. I understand that people who have read the book or seen the other film will already know what’s coming – although from what I know about the source material, this film does a few things that are noticeably different – but there is also a large amount of people who don’t know a lot about this story, myself included, so to kind of give a large part of your film away in the advertising is kind of a dick move towards those who wanted to go in with a blank slate. So, because I had seen that trailer, I already knew what the big twists were going to be, so when watching the film I was mostly just sitting there patiently waiting for those parts to finally happen, because there was no point in getting too invested in some of these characters when I already knew what fate has in store for them later on.

However, a lot of the blame for that blunder could mostly be attributed to the marketing department at Paramount, but even so the movie itself almost never lives up to its promise of being a seriously scary little horror; instead, it settles for being just an average, run-of-the-mill fright fest with some interesting developments but also a lot of seriously dumb ones as well. A lot of characters in this movie do some really stupid things for the sole purpose of moving the story forward, some of them not even making any sense when you know a bit more about them beforehand, and you’re not at all shocked when they realise there may be consequences to all their dunderheaded mistakes, since you figured that out way before any of them did. There are also entire scenes and story strands that only exist to make the audience jump in their seats instead of actually serving a much bigger purpose in the rest of the plot; when Clarke’s character fails to save a car-crash victim, he starts to appear in visions and nightmares like he’s going to be a major plot point later on, but he only really shows up every now and then for a cheap jump-scare, which makes that whole build-up largely pointless. The film, as a whole, just wasn’t that scary for me, as I’d seen what happens already in the film’s spoiler-heavy marketing, and the scares that it kept for the film itself are mostly just variations of frights done much better in other movies.

But it’s not a total failure; to their credit, directors Kevin Kölsch and Dennis Widmyer do conjure up a creepy atmosphere and look to their movie, which does send an occasional chill down the spine, and the acting is pretty solid, particularly from John Lithgow who’s a reliable force in nearly everything he does, and young Jeté Laurence who – without giving too much away – has some extremely memorable moments sprinkled throughout.

But overall, I found myself a little let down by Pet Sematary, especially after all the build-up of it being one of Stephen King’s scariest stories; if the film were any scarier, then I might have seen what others have been talking about.

Pet Sematary is a new adaptation of Stephen King’s chilling novel that, for all its build-up, feels somewhat disappointing that it’s not as scary as it could have been, especially when the marketing reveals way too much about its surprising twists and turns that should have been left for the unsuspecting viewer to discover.