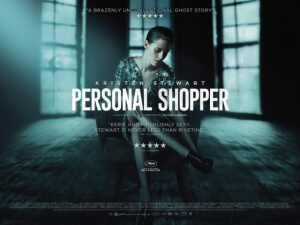 BASICALLY…: An American personal shopper (Stewart) practises a side-job of being a medium, which she uses to try and contact her recently-deceased brother…

Kristen Stewart has taken extraordinary measures to reinvent her career as a go-to independent film lead, after years in the spotlight after the contractual obligations of the Twilight franchise. So far, it’s worked in her favour as roles in films like Camp X-Ray, Still Alice and Certain Women have earned her some of the strongest reviews of her career, but none more so than her supporting role in French filmmaker Olivier Assayas’ Clouds of Sils Maria, which saw her not only earn some of the most glowing feedback for any actress of that year, but also gained some genuine awards recognition including an unexpected Supporting Actress prize at the César Awards (the French Oscars, basically).

Her reunion with Assayas for his latest film Personal Shopper, however, doesn’t come with as high praise as their last collaboration. Despite the film receiving a Best Director prize at last year’s Cannes Film Festival, it was booed at initial screenings and to this day it is receiving a polarising response with critics, with some declaring it a modern masterpiece and others a muddled and empty genre film. I understand where both sides are coming from, but Personal Shopper is no disaster, nor is it a new classic; it’s a fascinating, if flimsy, attempt to create a modern ghost story, with elements of something truly gripping that isn’t fully realised.

In the film, Stewart plays Maureen, an American woman living in Paris making her living as the personal shopper to a high-profile celebrity. It is a job she’s not fond of, as it requires her to go all across the city, and sometimes even to London and back, to fetch her client’s luxurious dresses and jewellery which she might not even decide to wear. She’s much more invested in her hobby of trying to contact ghostly spirits, as a way to communicate with her twin brother who recently passed away. After one or two attempts either end with or without incident, Maureen’s dual professional lives soon begin to converge in ways that she would rather not experience.

I must admit, when the reviews started coming in for this film last May direct from Cannes, the surprise direction it was taking with its supernatural genre switch was a little baffling to me. It appeared that instead of making a straightforward film about a woman working as a personal shopper, exactly as the title suggests, Assayas actually made something unexpectedly gothic and with a bit more of a spooky atmosphere. Perhaps it was this surprise genre-switch that provoked those boos and the polarising critical response, but maybe it was actually because the two plot threads don’t mesh that well together. The supernatural part of the story is suspenseful, and even quite chilling, but meanwhile the stuff with her going about her day during her titular job feels like a completely separate movie, especially when it introduces a text-message sub-plot which could be its own standalone thriller movie. Once the film introduces the fact that ghosts are wholly real in this universe, ectoplasm and all, it’s hard to focus completely on anything else the movie throws at you, because the moment you introduce something as crazy as actual ghosts in your movie, you’ll struggle to find ways to realistically top that kind of development without stretching the borders of reality even further, which this movie doesn’t end up doing. Neither plot thread really gets a hugely satisfying conclusion either, with a lot of it going almost nowhere and without that clear an indication of what they all mean in the grand scheme of things – you can argue that it was Assayas’ intention to leave things as ambiguous as possible (after all, it’s a story about things we can’t fully see), but while it is a noble statement it doesn’t make for a fully engrossing audience experience.

However, the movie does make up for some of its structural flaws with some strong atmosphere, understated moments of fear and dread, and a fascinating lead performance. Stewart is exceptionally strong here, as someone whose personal detachment from the world around her has led her to lead a life of misery and constant fear of not just the afterlife, but also of herself and what she may be capable of, and Stewart truly dives into what makes her character function in scenes that don’t even require her to speak, making her a force to be reckoned with. On the directorial front, Assayas is also good at mustering up tension and Hitchcock style suspense that really make certain scenes, particularly any involving a more ghostly presence, creating an uneasy and oddly inviting atmosphere that rivals a good chunk of the classic ghost stories. He is also able to allow some scenes to flow naturally, such as one scene where Stewart’s character is goaded into trying on some of her client’s wardrobe, which is one where the music, camera angles, and the pacing – not to mention the eye-grabbing performance that Stewart herself is giving – gives the moment a strangely erotic and sensual feeling that lingers on long after it ends.

For all its problems, Personal Shopper isn’t worth the heckling, but nor is it worth the praising as a new modern masterpiece either. It is what it is, an interesting experiment that only produces some mild, but nonetheless effective, results.

Personal Shopper boasts a strong sense of atmosphere from director Olivier Assayas, not to mention a captivating lead performance by Kristen Stewart, but its genre-hopping plot threads don’t always mesh together as well as hoped, making it an interesting exercise in combining two very different movies as effectively as possible, but with a somewhat flawed execution.